We’ve been telling you that there’s a BMW S1000RR on the way for a few months now. And a patent filed in China CONFIMS that the hugely successful S1000RR is set to receive a range of updates for 2019. 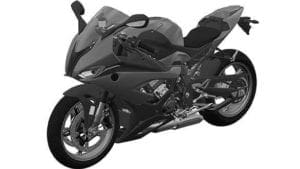 China’s intellectual property office has published patents revealing the new BMW S1000RR for 2019 (well, that’s what it looks like to us). The design was filed back in February with China’s SIPO (following a priority filing with Germany’s patent office back in August 2017) – and the patents reveal a sportbike that’s pretty much identical to the SPY SHOTS that have been doing the rounds after emerging last year.

From what we can see, the updated S1000RR retains much of the outgoing models feature, including its asymmetrical fairing, gill-like pattern on the right, and small opening on the left. However, the new design doesn’t feature the S1000RR’s asymmetric headlights, as BMW instead opt for a pair of matching lights on either side of the central air intake. 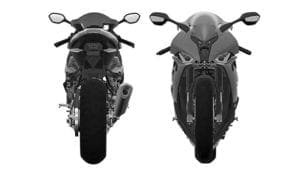 It also appears that the new design shows a different engine too. From what we can see, it’s still an inline-four unit, with the four header pipes merging into two – before routing through to a silencer (which actually looks quite a bit smaller than the one on the outgoing 2018 model). Judging from the patent designs, it looks like the chassis has been revised too. The frame now rises gently from the rear engine mounting plates, before turning up at a steeper angle from just behind the cylinder head. Plus, the rear subframe is constructed using a new trellis design, and the swingarm seems to be new too. 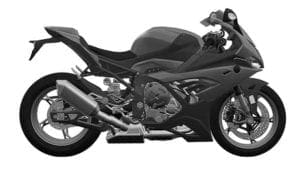 Of course, none of this is set in stone and we’ll undoubtedly know much more once BMW officially introduces the S1000RR for 2019. And chances are, it should be far away, with the new model likely to be unveiled at either INTERMOT in Cologne or EICMA in Milan over the next couple of months.