Five-time World Champion Jorge Lorenzo has set a new record, picking up his fourth Misano pole in five years – as Marquez crashes out. 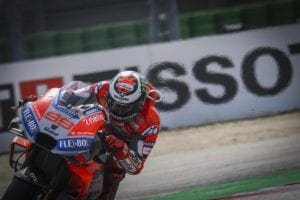 Jorge Lorenzo (Ducati Team) broke his own 2016 pole lap record at Misano World Circuit Marco Simoncelli in an adrenaline-fuelled qualifying on the Adriatic, searing around the venue in a 1:31.629 to lower his own fastest laptime and secure Ducati’s first pole at the venue since 2008. Jack Miller (Alma Pramac Racing) put in a stunner at his team’s home race to take second and qualify as top Independent Team rider, with Maverick Viñales (Movistar Yamaha MotoGP) locking out the front row after a last lunge for the front.

One key name missing from that trio? Marc Marquez (Repsol Honda Team), top qualifier this season so far, did not make it onto the front row – he crashed. Lorenzo’s ominous form was certainly a key headline but the drama for the Championship leader lit up the session. Crashing on his second run in a relatively fast lowside, the number 93 was straight to his feet without pause for thought and sprinting to get a lift back to the pits. Once back in the paddock on the back of a scooter, he hit the ground running again to run through his Repsol Honda garage from front to back, straight back on his other machine and heading back out again. Could he do another ‘Texas 2015’ style pole dash?

As it turns out, he’ll line up fifth – his equal worst qualifying in the premier class at the venue – and he’ll have some serious company in the form of Andrea Dovizioso (Ducati Team), who’s just alongside him in fourth.

Behind Dovizioso and Marquez, Cal Crutchlow (LCR Honda Castrol) was sixth and completes the second row, suffering a low-drama crash near the end of the session. And the Brit broke some local hearts, with Valentino Rossi (Movistar Yamaha MotoGP) pushed down to head up the third row.

Rossi has had a weekend of ups and downs so far at his home venue, just making it into that all-important top ten on Friday and continuing worked hard on Saturday to get race ready. In qualifying the rider from Tavullia was hovering around the second row, before just losing out in that last minute shuffle. Row 2 is completed by last year’s podium finisher Danilo Petrucci (Alma Pramac Racing) and fellow Independent Team rider Johann Zarco (Monster Yamaha Tech 3).

So that’s it for the premier class on Saturday. A three-time winner on pole, a dark horse with nothing to lose alongside him and a man who hasn’t won for a year make for an incredible front row – with everything to play for. Marquez and Dovizioso lurk close behind too, and the ‘Doctor’ can never be counted out on race day – especially considering his incredible support around Misano. Who will emerge from the melee ahead?