Romano Fenati has been slapped with a two-race ban after grabbing Stefano Manzi’s brake lever during the Moto2 race at this past weekend’s Misano GP.

Having previously clashed on track, Fenati dangerously leant over and squeezed Manzi’s front brake lever as he pulled alongside him at Turn 7. As a result Fenati was shown a black flag and disqualified for irresponsible riding. And following a review of the incident he’s been handed a ban for the next two races on the calendar.

But not everyone thinks a two race ban is enough. Before the decision was made, all three MotoGP podium finishers were asked about Fenati’s incident, with Cal Crutchlow calling for a lifetime ban for the Italian rider.

Crutchlow said: “I think he should never race a motorcycle again. He should have walked back to the garage and his team should have just kicked him straight out the back. You can’t do this to another motorcycle racer. We are risking our lives enough and if somebody grabs your brake – sure maybe there was contact before, but there is contact all the time. This is racing. To grab the brake lever on the straight – he deserves to be kicked straight out.”

Marquez spoke about the need to deter other riders from doing the same, saying: “It is race direction who must decide and they need to understand the full situation. They need to put some penalty that the other guys will never do because if you take a strong penalty then it will be a penalty that says ‘hey if you do this you will not race’.”

Dovisioso added: “I think what he did is very bad and the black flag is normal. But in any case you cannot do that.” 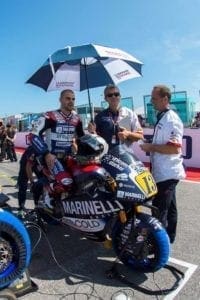 Fenati was reportedly kicked out of the VR46 academy for behaviour issues, and has been involved in a few incidents throughout his race career. In 2015, at the Argentinian round, Fenati was given three penalty points for kicking Niklas Ajo and switching off his bike at the end of the warm-up session.