We’ve just clocked this mock-up of a Nike advert from Dutch motorcycle site Oliepeil – and it’s having a dig at Romano Fenati’s actions at the Misano GP. Made us smile – and we thought you should see it. 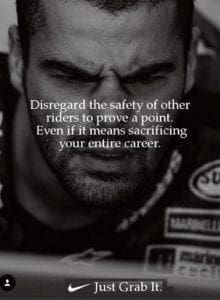 The Romano Fenati mock up is a rip-off of the controversial Colin Kaepernick Nike advert, which had made the news recently – following the ex-NFL stars refusal to stand for the US national anthem in protest at police brutality and racism back in 2016. Other players followed suit, in a protest which divided the country and sparked Donald Trump’s anger. And when Nike announced the ad campaign featuring the former San Francisco 49ers quarterback, pictures emerged on social media of people burning their Nike products in protest. 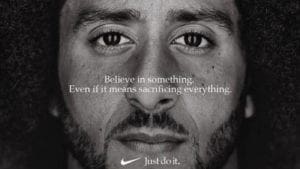