Jonathan Rea has extended his incredible winning streak at the Autodromo Internacional do Algarve with another victory in Race One on Saturday, his sixth consecutive win at the Portuguese circuit – and his eleventh of the 2018 MOTUL FIM Superbike World Championship season. 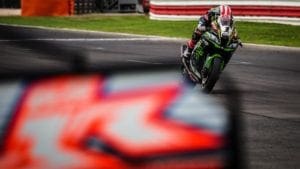 The Northern Irishman was dominant at Portimao, taking the lead inside the first lap and crossing the line comfortably ahead of Marco Melandri (Aruba.it Racing – Ducati) in second and Michael van der Mark (Pata Yamaha Official WorldSBK Team) in third.

There was drama very early on at Portimao for polesitter Eugene Laverty (Milwaukee Aprilia). The Irishman had started from the front for the first time since 2013, but a slow move off the blocks saw him get caught up in the field of riders behind at turn 1. A few seconds later, Xavi Fores (Barni Racing Team) misjudged his turn, clashing with Laverty and taking both men out early.

Jonathan Rea took advantage of the early chaos, flying into the lead ahead of Melandri through the exit from turn 1, with Lorenzo Savadori (Milwaukee Aprilia)  – in search of his first podium finish in WorldSBK – close behind, while Chaz Davies (Aruba.it Racing – Ducati) suddenly found the form that had evaded him since Friday, shooting up to fifth position inside one lap from fourteenth on the grid.

While Rea was eventually beaten for the Superpole earlier in the day, the Northern Irishman’s strength at Portimao this weekend and at the official test three weeks ago is his unbelievable consistency. Coupled with the best overall pace on track – keeping his lap times under 1’43 for the entire first half of the race – there was no stopping Rea in Race One, as he swept away into a 2-3 second gap.

There was promise of a thrilling tricolore battle behind for second, but it lasted just half the race: Savadori slid out at the end of the main straight in lap 12 and put an end to a miserable afternoon for the Milwaukee Aprilia team, just hours after their best qualifying performance of 2018.

With one Italian out, the other, Melandri strolled to his best result since the Acerbis Czech Round in second, turning good pace into a fantastic result. Michael van der Mark, completing a quiet yet professional race behind, took the remaining podium place, his eighth of the season; Davies followed with an incredibly valuable fourth place that takes him straight to P1 on tomorrow’s grid, in what had previously been a very difficult race weekend.

Tom Sykes (Kawasaki Racing Team WorldSBK) made it to the checkered flag in fifth, completing a solid points-haul for the green machines. Loris Baz (GULF Althea BMW Racing Team) meanwhile finished Race One in sixth, his best result since returning to WorldSBK this season.

Jordi Torres (MV Agusta Reparto Corse) celebrated his future debut in MotoGP™ with seventh position at the Portuguese rollercoaster, which pushes him ahead of Leon Camier (Red Bull Honda World Superbike Team) in the championship standings, after a mechanical failure ended the Brit’s race early.

Toprak Razgatlioglu (Kawasaki Puccetti Racing) was the best independent rider in Race One at Portimao, coming in eighth and just ahead of fellow 2018 debutant Michael Ruben Rinaldi (Aruba.it Racing – Ducati) in ninth. Alex Lowes (Pata Yamaha Official WorldSBK Team) completed the top ten after struggling through the early stages of the race.