Honda leads Ducati and Suzuki as the Championship leader takes home win ahead of Dovizioso and Iannone in a classic Aragon contest. 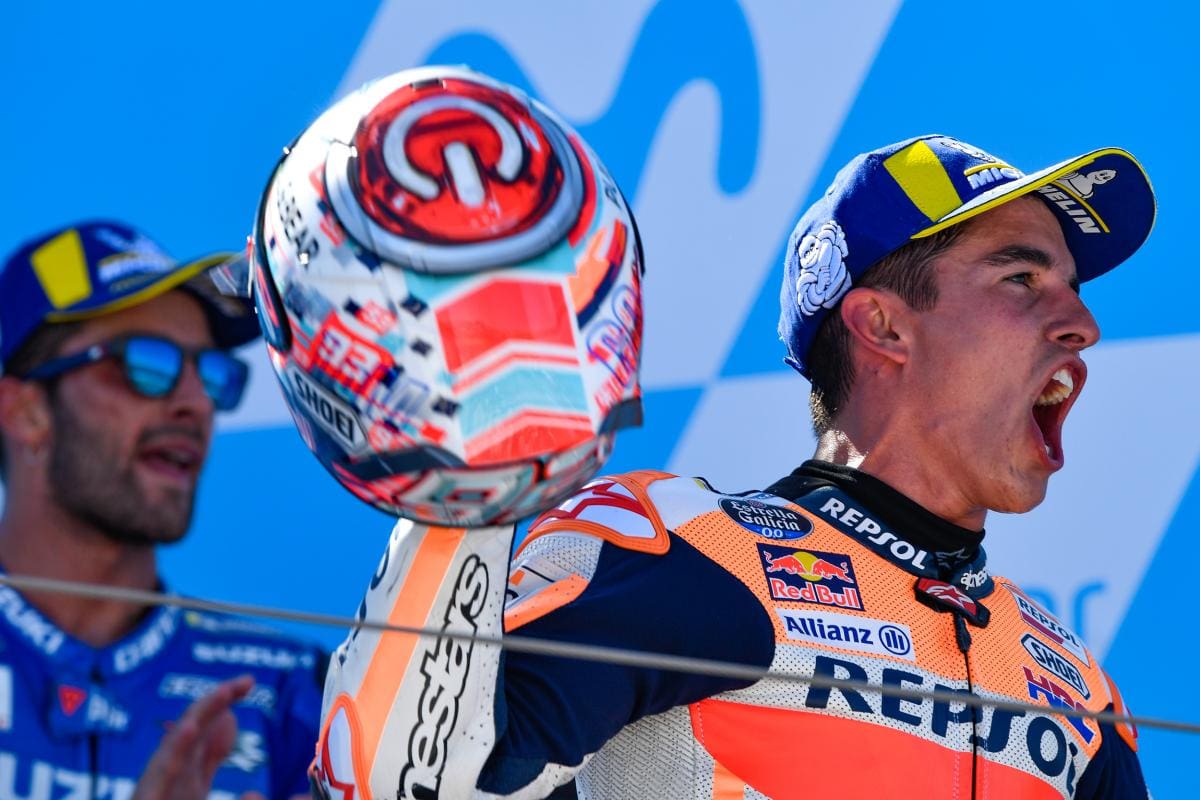 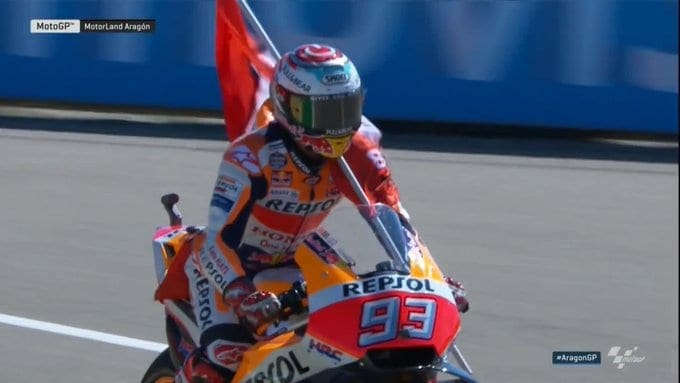 It was the Spaniard who snatched pole from teammate Dovizioso and Honda rival Marquez on Saturday, but after the latter got a great launch from P3 on the grid and dived up the inside to grab the holeshot, sending both riders wide, the ‘Spartan’ highsided out of contention as his hopes of a win went begging – huge disappoint for Lorenzo who suffered a dislocated toe in the process. 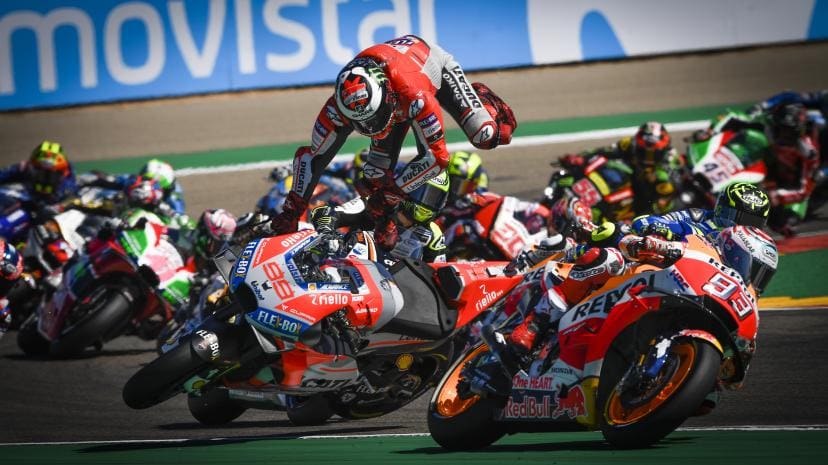 This first corner drama allowed Dovizioso to take the lead of the race, with Marquez slotting into second ahead of the two fast-starting Suzuki’s of Iannone and Alex Rins (Team Suzuki Ecstar). The Ducati rider then settled into a rhythm and controlled the pace, but the following quintet which included Dani Pedrosa (Repsol Honda Team) and Aprilia Racing Team Gresini’s Aleix Espargaro were locked in tow for the opening exchanges. Cal Crutchlow (LCR Honda Castrol) was joining the back of the leading group after he lost out on the opening lap from a P4 start, but the British rider then crashed out at Turn 1 on lap five – rider ok.

Back on track and Rins was looking menacing behind Marquez, shadowing numerous overtaking attempts into the first corner as both Suzuki’s kept tabs on the leading duo. By lap 11, Dovi, Marquez, Rins and Iannone had edged out two-second gap to Pedrosa and Esparagro and almost as if someone had flicked a switch, ‘DesmoDovi’ turned up the wick and posted the fastest lap of the race a lap later – a 1:48.3. Marquez responded to cling onto the tailpipe of the Italian as the two looked to have broken clear of the GSX-RRs. 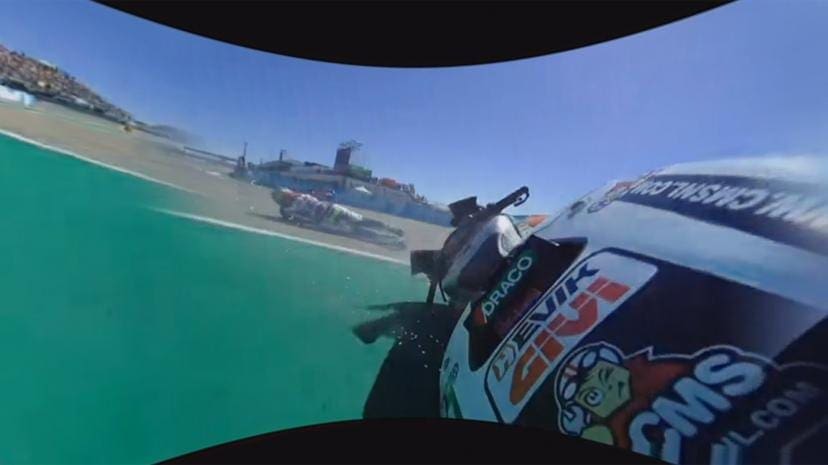 The Jaws music then sounded as the number 93 smelt blood on lap 14, carving past the Desmosedici at Turn 12 as the battle for the win kicked into life. On lap 16, Dovizioso got the drive up the hill to duck under Marquez at Turn 4, only for the Repsol Honda rider to immediately respond up the inside at Turn 5, with the Italian then biting straight back at Turn 7. This allowed Iannone to close the gap and then on lap 19, Marquez pounced again at Turn 12.

The Spaniard ran slightly wide which allowed Dovizioso to get a run and the number 04 stuck his GP-18 up the inside at Turn 14. Marquez tried his best to hold the position but he found himself out on the astroturf, but he cut back to get the inside line before the back straight, with Dovizioso chopping back underneath at Turn 15, while Iannone took the outside route around the six-time World Champion to briefly lead. It was breathtaking stuff from the trio, with Dovi and Marquez’ straight-line speed getting the better of Iannone on the run down to Turn 16. 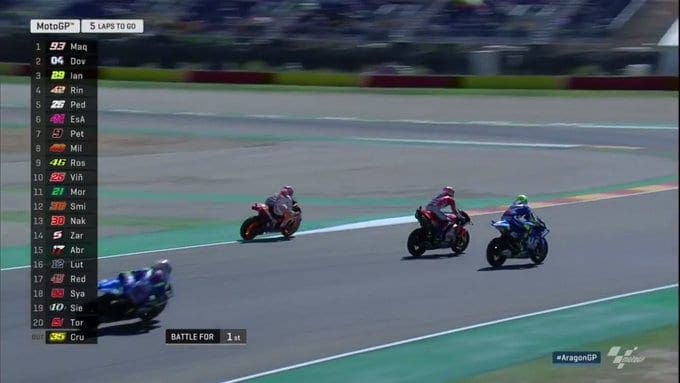 Lap 21 saw Marquez make the race-defining move at Turn 5, and the reigning World Champion held firm until the checkered flag to take a third straight win in Aragon, equaling Mike Hailwood’s win tally of 41 for Honda in the process. Dovi settled for second to equal Casey Stoner’s Grand Prix podium count, with Iannone earning his third podium of the year.

Fourth was Rins who played his part in a classic race on home soil, a second consecutive P4 for the Spaniard, with Pedrosa securing his first top five since the Catalan GP at his penultimate career home Grand Prix. Espargaro excelled in sixth to pick up the Aprilia’s best result of the season, matching their P6 in Aragon last year. Danilo Petrucci (Alma Pramac Racing) was seventh, just under a second ahead of Valentino Rossi (Movistar Yamaha MotoGP) as ‘The Doctor’ produced a solid comeback ride from P17 on the grid. Jack Miller (Alma Pramac Racing) lost out to Rossi in the latter stages, 9th for the Australian, with Maverick Viñales (Movistar Yamaha MotoGP) rounding out the top ten – not the result he would have been looking for on home soil.

A monumental Marquez victory on home soil leaves the Honda rider with one hand on the title as the premier class head to Thailand for the first time in just under two weeks – will it be another Marquez vs Ducati contest? 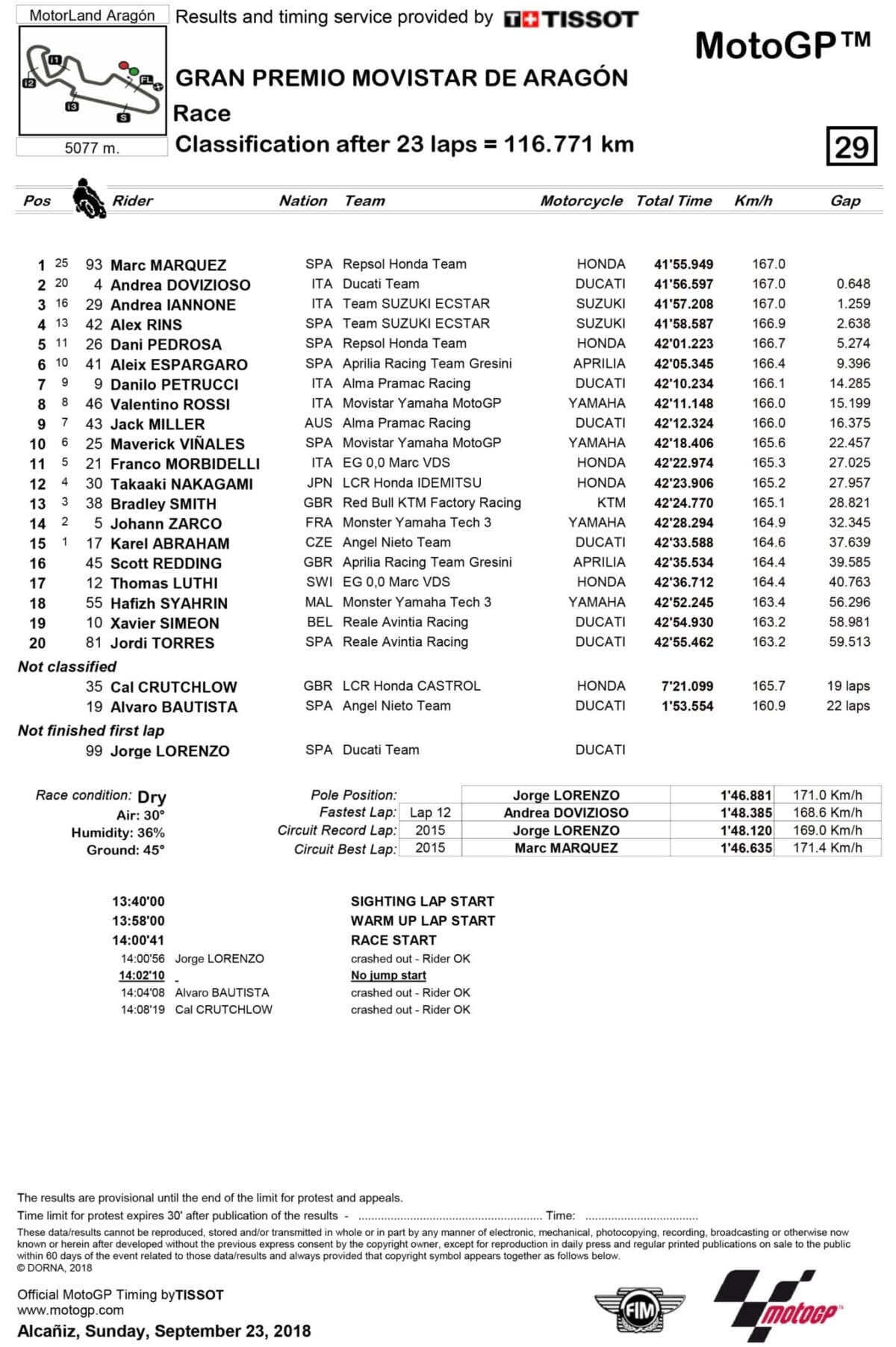