We’ve clocked a CARB document for Kawasaki’s next generation 1000cc adventure-tourer for 2019 – and it reveals that Kawasaki is making a commitment to reducing emissions. 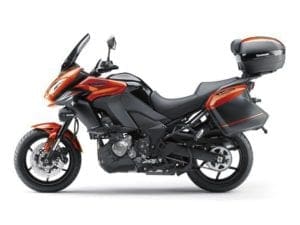 At this stage, there’s little known about the updated model – but the first details have been betrayed by its emissions certification, ahead of its expected reveal at the big bike shows over the next couple of months.

Basically, the company has filed documents with the California Air Resources Board that show the 2019’s Versys 1000’s hydrocarbon emissions will be more than halved, while the combined hydrocarbons and nitrogen oxides emissions will drop from 0.2g/km to 0.1g/km, plus, the bikes carbon monoxide output will reduce from 0.4g/km to 0.3g/km.

Of course, those numbers don’t tell us all that much about the actual changes to the 2019 Versys – but the documents do give away that it’ll come with a new exhaust system. The current model uses two three-way catalytic converters, while next year’s will have just one – presumably larger and more efficient. 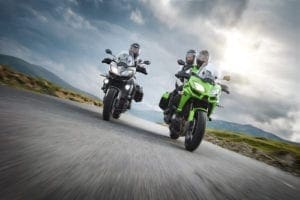 Interestingly, the 2019 model will be around 10kg heavier than the current 250kg model. So it’s likely that the Versys will retain its existing aluminium chassis – with the extra weight coming from its revised bodywork and equipment, including its new exhaust and catalyst.

Either way – there’s not long to wait now before we get to see the latest model in the flesh. It’ll either be unveiled at Intermot in Cologne, in just over a weeks’ time – or it’ll be on display at EICMA in Milan in November.