MV Agusta and Pirelli has just unveiled a special edition version of MV’s Dragster 800RR. And it looks SUPER trick. 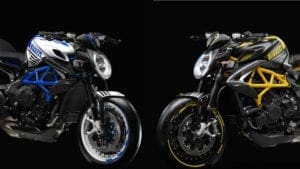 Last year MV Agusta and Pirelli presented a special version of a Brutale 800RR – and now the two iconic brands have rustled up a gorgeous version of the Dragster 800RR.

Unveiled as part of the opening ceremony of the new P Zero World, Pirelli Showroom in Monte Carlo – the new MV Agusta Dragster 800RR Pirelli will only be available in limited numbers – so if you want to get your hands on one, you better act fast. 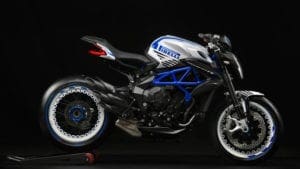 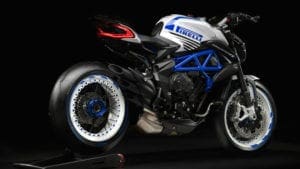 Technically, not much has changed compared to the model it’s based around – Its three-cylinder engine still delivers 140bhp at 12300rpm and 87Nm of torque at 10100rpm. In essence, It’s more of a styling exercise, with a couple of distinct colour schemes on offer – in addition to some specially designed rubber trims direct from Pirelli’s R & D department. According to Pirelli, the new material should help to offer better resistance to scratches and a high resistance to weathering and chemical substances. 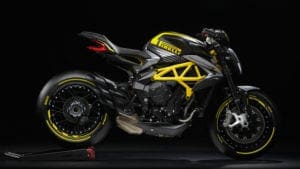 That’s not all; the rims have been painted to match the bikes respective colour schemes. There’s a new seat, a revised silence which has been coated with a special, temperature-resistant paint. For rubber, the two manufacturers have opted for Pirelli Diablo Supercorsa SP’s.

At this stage, we don’t know how much it’s going to cost – but considering there’s only going to be a limited number of the new MV Agusta Dragster 800 RR Pirelli, expect it to be fairly pricey. Either way, we’ll let you know as soon as we hear more.