UNDER THE HAMMER: Peter Fonda’s 1968 Bultaco Pursang from EASY RIDER.

Ever fancied owning a piece of movie motorcycling history from (arguably) the most iconic biker film ever made? Well now you can – because the Bultaco Pursang that Peter Fonda rode in one of the first scenes of Easy Rider is going under the hammer. 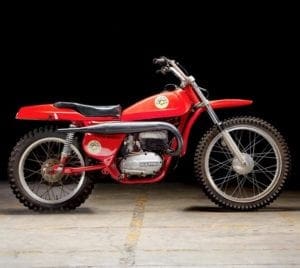 The Bultaco Pursang was one of the most successful two-stroke motocross bikes of its era, taking on some of the biggest motorcycle marques and regularly trouncing them on the world stage – and Bonhams is offering the chance to get your hands on one. But the bike that’s up for grabs never won any championships; instead, it was made famous in the quintessential biker move, Easy Rider.

In the film, Peter Fonda arrives at the Le Contenta Bar on a Bultaco Pursang with Dennis Hopper in tow on (what looks like) a Norton Ranger. Of course, the film is famous for the two choppers that dominate the screen – but that’s no reason to dismiss the Bultaco. This particular Pursang has remained in private hands since filming wrapped, and more recently, has been carefully repainted and restored, while retaining the bikes original patina.

As you’d expect, the pricetag is likely to pretty hefty. In fact, Bonhams estimate that it’ll sell for between £45,000 and £50,000 when it rolls across the auction block on the 6th of October in Alabama.