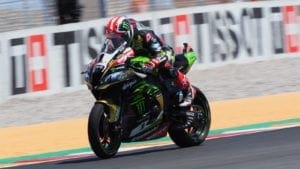 The champion was forced to dig deep to take the Argentinian double ahead of Xavi Fores (Barni Racing Team), but now holds another record to his name for the most consecutive wins in a World Superbike season, beating Colin Edwards and Neil Hodgson’s previous streak of nine victories.

The opening laps at the Circuito San Juan Villicum were amongst the most chaotic of the entire 2018 season. Fores was quick off the marks from pole, but his partners on the Race Two front row suffered much worse fates: Tom Sykes (Kawasaki Racing Team WorldSBK) immediately fell to the fringes of the top ten, while Eugene Laverty (Milwaukee Aprilia) crashed out unopposed in lap three whilst riding in second place.

It would be a big understatement to say that Rea’s race start went less smoothly than in Race One. A strong start pushed him up into the top five at the lights, but a succession of mistakes through the end of lap one and the first half of lap two saw him lose positions to Alex Lowes (Pata Yamaha Official WorldSBK Team) and Chaz Davies (Aruba.it Racing – Ducati), nearly falling one further under pressure from Marco Melandri (Aruba.it Racing – Ducati).

The Argentinian fans would not have to wait long for the comeback. Rea saw himself past Davies after the Welshman went in too hot at turn 1, then made good use of the back straight slipstream to edge smoothly past Lowes. A mistake from Razgatlioglu also left the Turkish rookie in the Northern Irishman’s wake. Meanwhile, a bruising battle for fourth saw Davies, Melandri and Lowes exchange places turn after turn.

At the four-lap mark, Fores had already opened a huge three-second gap taking advantage of Rea’s troubled start. This didn’t last: at a rate of nearly a second per lap, Rea caught up with the Spaniard and fought his way through to the front inside lap eight. Fores immediately pounced back at the back straight, but the Kawasaki’s pace was too much on the day and the weekend and, after moving back into the front half a lap later, Rea blasted into the lead and head-first into his tenth consecutive win, unchallenged from that point forwards.

A cool second for Fores means that he is now the official independent riders champion, thanks to his fifth podium of the year. Marco Melandri managed to return to the rostrum after a fantastic race-long duel with Davies, who finished fourth and again increases his gap with Michael van der Mark (Pata Yamaha Official WorldSBK Team) to 24 points, after the Dutchman ended Race Two in ninth.

Tom Sykes managed to climb back to fifth following a strong second half to his race, with Lowes in sixth and Razgatlioglu back in seventh, after fading in the late stages. An anticlimactic ending to the rookie’s Argentinian round, but he still manages to claim the best points haul of his WorldSBK career over a race weekend.

Lorenzo Savadori (Milwaukee Aprilia) finished Race Two in eighth, whilst Jake Gagne (Red Bull Honda World Superbike Team) made it into the top ten for only the third time this season. Local hero Leandro Mercado managed to finish in twelfth, after crashing in Race One.

Don’t forget. It’s the final round of the season in two weeks’ time at Qatar. What do you reckon? Will Rea extend his winning streak?