Haojue has just unveiled its new DR300 at the Chongqing Moto Fair 2018 in China – and we reckon that it could mean that there’s a new Suzuki GSX-S300 on the way.

Patent images of Haojue’s new DR300 have been doing the rounds since April this year. And now, the Chinese brand has finally unveiled its latest model to the wider world at the Chongqing Moto Fair. If you’ve not heard of Haojue before, it’s currently the largest motorcycle manufacturer in China. And it’s also the largest Chinese-foreign-invested motorcycle manufacturer, thanks to its intimate partnership with Suzuki. 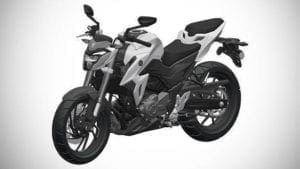 In the past, Haojue has helped Suzuki with production – taking responsibility for its GW250 and GSX-250R. And to us, that says that the DR300 could soon become a new Suzuki GSX-S300 – all it needs is a handful of changes and a simple rebadge to be ready for the global market.

From what we’ve heard, the new Haojue DR300 (Suzuki GSX-S300) will be powered by an all-new 298cc, parallel twin-cylinder, four-valve, liquid-cooled engine, mated to a six-speed transmission. Reportedly, the new powerplant is being developed independently by Haojue – which means that Suzuki’s old school, long in the tooth Inazuma unit may finally be retired from use. It’s had a good run, after all… It’s also worth noting that with the introduction of a new 298cc engine, it’s possible that Suzuki’s range of smaller capacity machines – including its V-Strom and VanVan – could also expect an update.

From a styling perspective, the new DR300 looks quite similar to the patent images which emerged earlier this year, with its aggressive design, angular lines, small yet sharp-looking LED headlights, swept-up exhaust, and USD gold forks. In fact, it looks a lot like a mini version of Suzuki’s GSX-S1000.

More specifically, suspension comes in the form of USD forks up front and an adjustable mono-shock at the rear – while its wheels are 10-spoke 17-inch alloy wheels shod with 110/70-section and 140/60-section Pirelli Diablo Rosso III tubeless tyres at front and rear respectively. Braking is looked after by a 298mm petal disc at the front and a slightly smaller disc at the rear, with dual-channel ABS fitted as standard.

At this stage, there’s been no official confirmation from Suzuki as to whether the DR300 will get rebadged as the new GSX-S300 – but we’ll be keeping a close eye out as more is revealed. Thanks to Motoroids for the images, and Moto Introduction for the video.