Earlier this year, Honda unveiled a reimagined version of its iconic Monkey – which has set the hearts and minds racing of motorcyclists (and non-motorcyclists) the world over. And Yoshimura is getting in on the act, releasing a new slip on exhaust for the likeable little machine.

Like its MSX-125 sibling, which is capable of being converted into pretty much every custom concept one could conceive, the new Monkey looks to be the perfect base for a range of custom parts and accessories. And the first one we’ve seen that really gets our imagination going is a funky looking slip-on exhaust from Yoshimura. You know they’re going to sell a few of these.

It’s not all about looks though. Yoshimura say its RS-3 pipe boosts max horsepower over 7%, max torque over 3% – and even helps the compact 125cc commuter to sound like a little weapon. If you don’t believe us, check out the video. Oh, and props to the guys at Yoshi for the peg scraping action too – looks like they’re having a lot of fun.

Interestingly, Yoshimura is already offering a couple of options for the Monkey. There’s its Race RS-3 system, which will set you back just under £500 – and its Street RS-3 system, which comes in at just a shade over £400. Plus, it’s also offering a new rear fender setup, to help tidy up the bikes back end. For more information, click HERE. 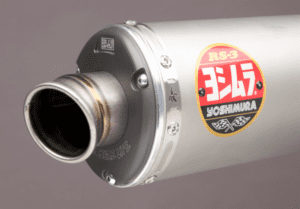