The Department for Transport is considering adding the Dutch Reach to the Highway Code – meaning you may soon be obliged to open car doors in a whole new way. 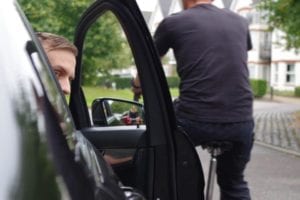 For the uninitiated, the Dutch Reach is a method for opening cars doors which was thought to have been pioneered in the Netherlands in the ‘70s. It’s a fairly simple idea – encouraging drivers (and passengers) to open their door using the hand furthest away, which in turn forces them to turn their body and look behind them for cyclists and bikers. Clever.

At this stage, the Department for Transport is reviewing the idea – before making a final decision about whether the safety measure should be added to the Highway Code and made into a law. Interestingly, it may be accompanied by another law which would ensure drivers are liable for the damage caused to a bike, should they open their door and hit a motorcyclist/cyclist.