VIDEO: Yamaha FINALLY confirms Ténéré 700 is coming. Set to be UNVEILED at EICMA (we think).

It seems that Yamaha is FINALLY gearing up to release the production version of its Tenere 700 lightweight adventure machine – at EICMA in a couple of weeks’ time.

After its journey across the Atlantic from Argentina, the Yamaha Ténéré 700 has been spending some time in Europe as part of the final stage of its six-month-long World Raid Tour. And with the release of a new video, Yamaha has teased that something will be happening with its new T7 on November 5th. To us that means it’s going to be unveiled at EICMA – but we’ve been wrong before. Either way, it’s been a long time coming, but we can’t wait to see it in the flesh. 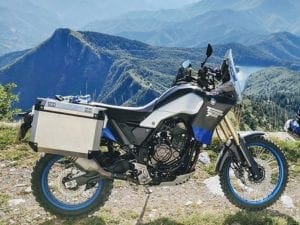 Yamaha’s World Raid Tour has been a bit of a departure from the more traditional techniques used to market motorcycles. Over the last six months, a range of riders across the globe have had the chance to put the new machine through its paces, and using video,  showcase just how capable the new Tenere 700 is out on the tarmac and trails. Since arriving from South America, Nick Sanders, Herbert Schwarz, Alessandro Botturi, David Frétigné and Cristobal Guerrero have covered almost 2,000km between them.