The hotly anticipated Suzuki Katana was finally unveiled earlier this month at Intermot in Cologne – but it would seem that there’s more to come, with Suzuki releasing a new video which hints that there’s a black Katana on its way to EICMA in a couple of weeks’ time.

It’s difficult to be entirely sure what Suzuki has in its back pocket – but considering it’s held back the black edition Katana for EICMA, we reckon there’s a bit more than just a simple colour change on the cards. 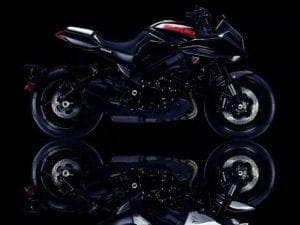 Admittedly, we can’t see much in the video – but as far as we’re concerned, there’s a good chance that the black Katana could come with a range of upgrades. Maybe it’ll be fitted with some carbon fibre bodywork? Maybe we’re going to see a Yoshimura exhaust system? At this stage, we’re just speculating, but thankfully we haven’t got to wait too much longer – as in the video, Suzuki confirmed that the launch will be happening on November 6 – as part of the big EICMA bike show in Milan.