Beijing-based Evoke Motorcycles has just announced that it’s testing a new, second generation modular battery for its electric motorcycles. The new batteries are designed to allow for ultra-fast charging – and Evoke claims that they can be recharged from 0-80% in just 15 minutes. 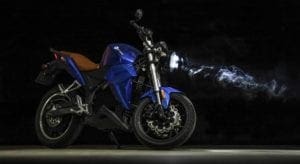 Evoke’s current generation batteries can be recharged using a wall charger in eight hours on 110V, or in 4 hours on 220V – so Evoke are making a hell of a leap to get the charging time down to 15 minutes. Admittedly, the new batteries will be designed to recharge using a Level 2 charger.

The batteries incorporate a number of new advancements, including a proprietary active thermal management system – which works using a combination of software and hardware to precisely control the temperature range of the Li-ion 18650 battery cells, and helps to increase the life of Evoke’s battery packs.

Chris Riether, VP of Engineering at Evoke Motorcycles said: “When we started the design process, we quickly understood that cell surface cooling wasn’t enough to effectively bring down temperatures to a safe range while ultra-fast charging. Additionally, extensive design time went into creating a thermal cooling system that is inexpensive and light for small to mid-scale vehicles. Electric motorcycles and other small scale EVs don’t have the luxury of space like electric cars and busses.”

Interestingly, Evoke’s second generation, fast charging batteries are designed as a modular system, and as a consequence can be used in a variety of different applications by being daisy-chained together for use in other small and medium-size electric vehicles.

For more information on the current generation of Evoke Motorcycles, click HERE.