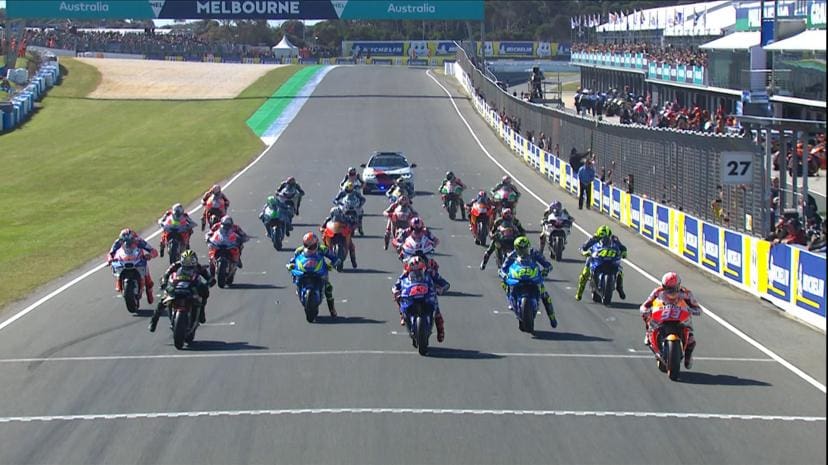 As the lights went out it was Danilo Petrucci (Alma Pramac Racing) who got a lightning launch from P8 to head around the outside and lead into Turn 1, but the Italian then ran off at Turn 2 to end his charge. However, fellow Alma Pramac Racing rider Jack Miller took advantage of his teammate’s misfortunes to take the lead of his home Grand Prix at Turn 4 – rinse and repeat for the Aussie from 2017.

Pole man Marc Marquez (Repsol Honda Team) slotted in behind Miller with Iannone third, but heading into Turn 1 on lap 2 it was all change: Marquez took over the reins of the freight train, with Dovi slotting into second, Iannone was third and Miller was back to fourth. The swapping and changing at the front begun with the fast and sweeping Phillip Island circuit keeping the riders in close pursuit of each other. The racing was hard but fair under glorious Australian skies.

However, close then became too close for Marquez and Johann Zarco (Monster Yamaha Tech 3) as the duo headed into the braking zone at Turn 1 on lap 6. Zarco’s front tyre came into contact with Marquez’ rear tyre, causing the Frenchman to lose control and crash at roughly 300kph in a hugely scary incident. Zarco’s bike severely damaged the back of Marquez’ Honda and subsequently, the 2018 Champion retired from the race. Thankfully, Zarco walked away from the incident uninjured. 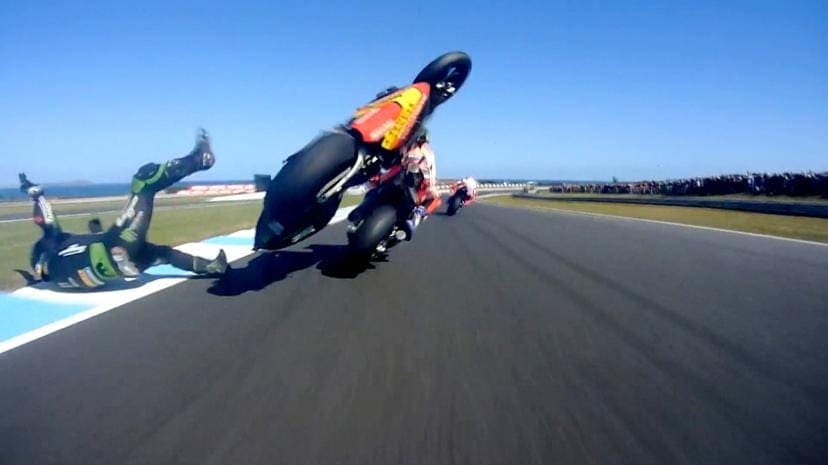 This left Dovi leading from Miller and Iannone but then Viñales began to make his move. Starting P2, the Spaniard didn’t get a good getaway and was as low as tenth at one stage, but on lap 8 he made what would turn out to be his race-winning overtake at Turn 4. Maverick then took off in true Top Gun style and within a lap, he had created a 0.8 second lead.

Viñales was in the groove and looked like he was on rails around the Island. Valentino Rossi (Movistar Yamaha MotoGP) was leading the chase before Iannone then took the baton, but the Suzuki man ran wide at Turn 4 and dropped to the back of the quartet. Alvaro Bautista (Ducati Team) was taking no prisoners on his one-off Ducati factory ride, with he and teammate Dovi also taking it in turns to try and reel in Viñales. But no matter who it was out of the four, no one could match the Spaniard’s superior pace – 1.9 the gap on lap 13, which grew to four seconds by lap 21. 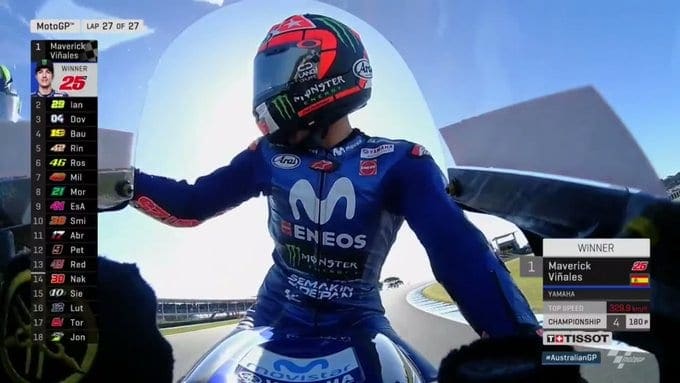 The battle for first was seemingly won but the fight for P2 raged on between Rossi, the two red Desmosedicis and Iannone, with Alex Rins (Team Suzuki Ecstar) also joining the fray the latter stages. On lap 23 it was the man who had dominated the weekend to get into P2: Iannone. Then, the gap to Viñales suddenly dropped below three seconds and then with two laps to go, it was 1.8 seconds. Surely Viñales wasn’t going to let this slip?

The answer was no, he wasn’t. The leader responded after being a second a lap slower to bring his YZR-M1 home in P1, 1.543 clear of Iannone, the latter beating Dovizioso in a battle for second. A mistake with just over a lap to go on the exit of Turn 10 ended Bautista’s hopes of a podium, a terrific P4 – his best result of the season – nonetheless for the Spaniard who helps Ducati Team close the gap to Repsol Honda in the Team Championship to 38 points, with Movistar Yamaha MotoGP now just 16 points off Repsol Honda. 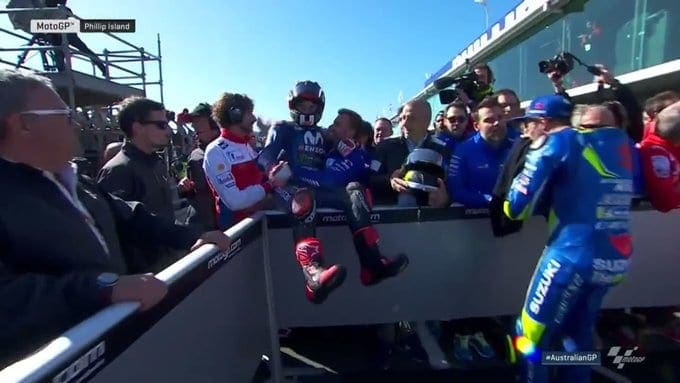 Rins got the better of Rossi on the final lap to claim a fourth consecutive top five finish, ‘The Doctor’ settling for P6. Miller would bring his Ducati home in a solid P7 and as the leading Independent Team rider – the Australian just 6.7 seconds from the win – with Franco Morbidelli (EG 0,0 Marc VDS) earning his best result of the season in P8 to take charge in the Rookie of the Year Championship – Hafizh Syahrin (Monster Yamaha Tech 3) crashing out of a top ten place on lap 19 at Turn 4. Aleix Espargaro (Aprilia Racing Team Gresini) was able to beat Red Bull KTM Factory Racing’s Bradley Smith by a whisker – 0.036 separating the duo at the line in P9 and P10 respectively. Great results for both riders which means all six manufacturers were in the top 10 at Phillip Island. 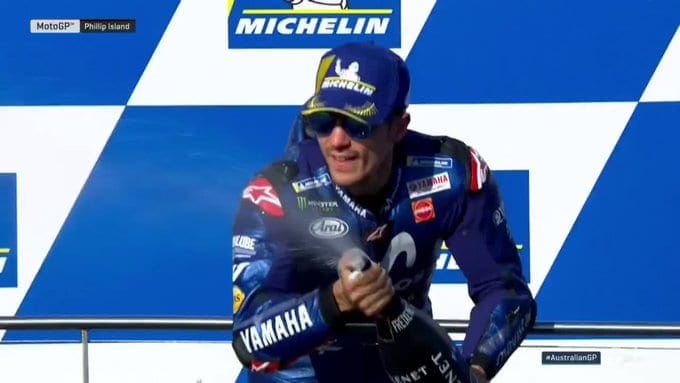 A fantastic and faultless ride from Viñales means Yamaha have won their first Grand Prix race in 490 days. Can this launch Maverick into an end of season onslaught for second in the Championship? 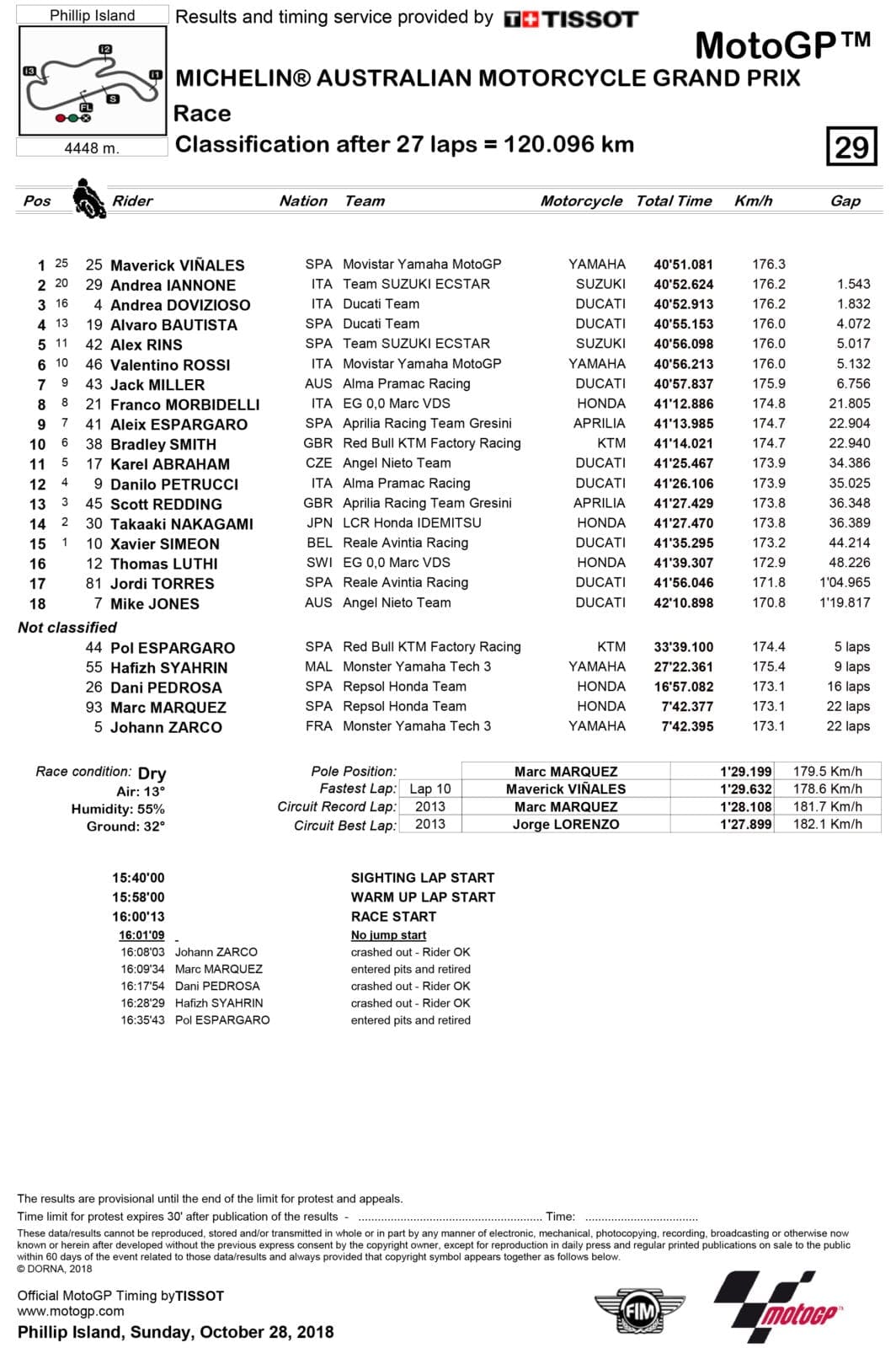 Next up is Malaysia and the last of the flyaway races. What do we have in store for us at Sepang?