RST have a racing pedigree, supplying the likes of Alex Lowes, Ian Hutchinson, Conor Cummins with kit help keep them safe out on the track and road; so they should know a thing or two about producing a set of leathers. Its TracTech Evo R CE range is designed for the track day rider so safety, as always, is paramount. This range has achieved the highest CE standards – scoring an AAA rating in tear strength, abrasion resistance and seam strength. You would think to acquire this you would have to compromise on comfort, but not so, as those clever people at RST have worked their magic. You can get the RST TracTech Evo R CE in a one or two piece set up. I’ve tested the two piece, as it’ll give me more versatility. After all, I do more road miles than track days. 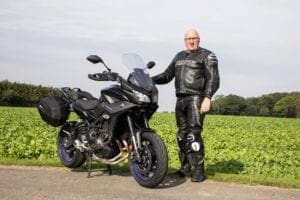 The Jacket has been kitted out with level 2 CE approved shoulders, back and elbow armour, with sliders on the shoulders and elbows. I’ve been told the shoulder sliders are supposed to deflect energy from a crash, which will help to protect your collar bone. I’m intending on not testing this theory. However, it’s nice to know they’ve thought about it. 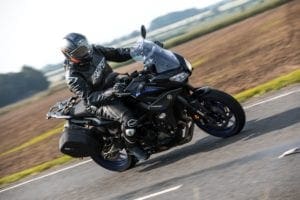 You would think that all the armour and sliders would make this jacket as stiff as a board but they’ve incorporated what’s called a four-way stretch theory. This equating to some well-placed stretchy material under the arms and in the middle of the shoulder blades combined with stretch panels which have been perforated, running from the chest under and around the arms. Achieving a great range of movement. If you’re unlucky enough to get caught out in the rain you’ll need a water proof. 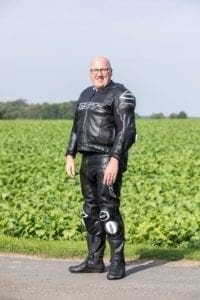 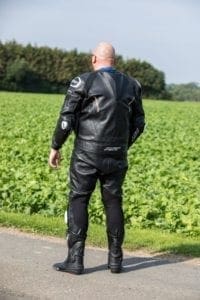 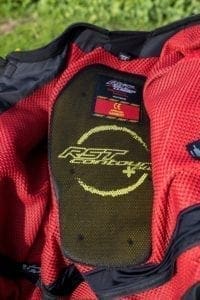 It has a striking fixed red liner which is very comfy. The inside zip up pocket is handy for storing my wallet and phone. There’s a further two zip up pockets on the outside, but I tend not to use them. The race collar and cuffs fit snuggly and the cuffs have a zip and Velcro fasteners so you can easily get the jacket on and secure them in place.

The back has a race hump where you can place your phone when using RST’s Tractech app. I must admit that I haven’t used this app just yet – however I haven’t taken these leathers on the track yet either. But they have become my go to leathers. 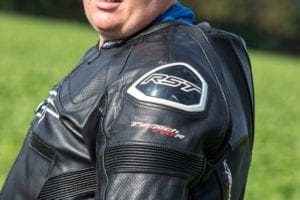 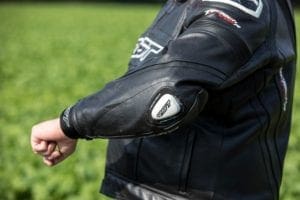 Additionally, the two-piece set is equipped with a max zip which means they can be attached to the trousers, which have the same technology built into them as the jacket. The trousers incorporate the CE approved armour in the hips and knees and detachable knee sliders all with the four-way stretch. They have 2 small zip pockets and fasten up with a zip and Velcro, when attached to the Jacket they make for a secure and well-fitting suit. They’re lined with the same striking red liner which is used in the jacket. This allowing for great movement. The leather has been perforated in key areas to allow for a well-ventilated suit in the summer and if you were to incorporate a good base layer, they could be worn as the weather gets a little grottier. At £549.98 for a full set of leathers and incorporating all these features, you’ll be hard pressed to find a better set of leathers in this price bracket. 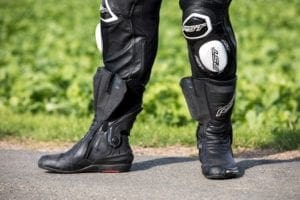 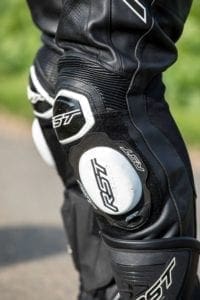