As part of the 2018 EICMA, Royal Enfield has just unveiled its biggest and most powerful motorcycle to date. Teased prior to the show, the new KX Concept Bobber is powered by a V-Twin 834 cc engine which has been developed in partnership with Polaris Industries (the brain’s behind Indian Motorcycle’s reboot). 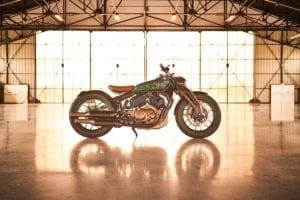 It’s a cool looking machine – although it’s a bit of a departure from Royal Enfield’s traditional, retro-styled output. It’s more along the lines of a Triumph Bobber or a Harley-Davidson 48, than a typical Royal Enfield. Admittedly, it’s just a concept at this stage – but we’re expecting it to make it to market in the not too distant future. Getting into specifics, the new Royal Enfield Bobber really does look the part, with its single seat, large engine, full LED headlamp with DRL outline and alloy wheels. It’s fairly well kitted out too, with twin exhaust mufflers, twin disc brakes on front wheel, flat handlebars and a long wheelbase. Suspension duties are carried out via telescopic front fork and monoshock at the rear – while power is offered from a 834cc, liquid cooled, fuel injected, V Twin engine developed with help from Polaris Industries, which is capable of kicking out 89bhp and around 100 Nm of peak torque.

Royal Enfield has stated that the Concept KX is not production ready, yet. In reality, it is probably best described as a design concept for the Indian based brands future motorcycles. That definitely fits with what we’ve heard about RE’s future plans – after it was revealed earlier this year that Royal Enfield’s working on larger cc bikes (above 700cc) to take on the likes of Triumph and Harley Davidson.