Taiwanese brand KYMCO is probably best known for its small and mid-capacity scooters, so the big reveal of its new electric SuperNEX at EICMA came as a little bit of a surprise. The SuperNEX is in essence an electric superbike – and from what we’ve seen so far, it’s a sophisticated bit of kit, with aggressive, sports-styling and a range of unique features to help it stand out from the crowd. 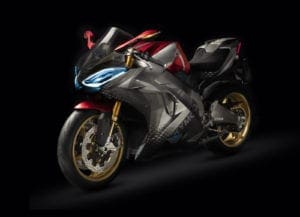 First up, it comes with Kymco’s own FEP (Full Engagement Performance) electronics package, which includes launch control, rear-wheel lift control, traction control, and various riding modes. It’s fairly well equipped too, with Brembo brakes, Öhlins suspension and a twin-spar aluminum frame. And in an a bit of a departure from typical electric bikes, it comes with a six-speed gear box with a slipper clutch. 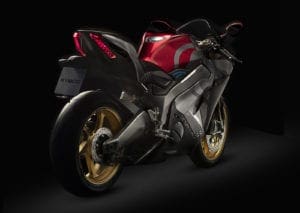 KYMCO claims that its gears help to improve not only its efficiency and responsiveness, but also its acceleration and top speed. As a result, KYMCO claims that the SuperNEX can go from 0 to 100km/hr in 2.9 seconds, from 0 to 200km/hr in 7.5 seconds and from 0 to 250km/hr in 10.9 seconds. Such insane performance at any speed is simply irresistible. It has claimed a top speed of 155 mph (250 km/h) for the new SuperNEX – which it can supposedly reach in 10.9 seconds – but at this stage, it’s quite difficult to have any idea how accurate those figures are.

Of course, KYMCO has already committed itself to the development of electric two-wheelers, previously unveiling its Ionex scooter, and clever battery exchange system – so that gives us a bit of confidence that the Taiwanese brand is up to the job of producing a serious electric sportbike, which is capable of competing with the likes of Energica. But with no news about future availability – only time will tell.