A photo of Jawa’s all-new retro styled 300 has been leaked on social media, ahead of the bike’s official launch in just over a weeks’ time. 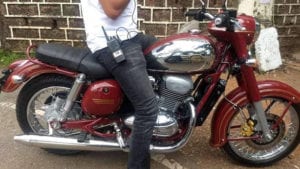 The new 300 looks very close to the Jawa’s of yesteryear – but it’s no classic machine. Production is no longer based in Prague, instead it’s being built in India – by Mahindra Group’s Classic Legends (who also own the BSA brand).

The leaked image follows on from Jawa’s big reveal of its new 300cc powerplant a few weeks’ ago. At this stage, we don’t know much about the new engine – aside from a handful of key figures. In essence, it’s a 293cc single-cylinder engine, with liquid-cooling, fuel injection and a four-valve DOHC valvetrain. It kicks out a claimed  27bhp and 28Nm of torque – which Classic Legends Boss, Ashish Joshi has said is delivered in a flat torque curve. Nothing ground-breaking – but it sounds like the perfect unit for Jawa’s modern retro reboot.

Away from its new engine, the upcoming Jawa definitely looks the part. It comes with USD forks up front, traditional twin-shocks at the rear, old school spoked rims, a peashooter style exhaust, a traditional single unit headlight – and what looks a simple digital-analogue dash. It’s also fitted with a period, bench-style seat, finished in dual-tone tan leather, with grab rails underneath.

There’s been no news yet on pricing or availability – and at this stage, we don’t even know if it’ll be available in the UK. The bikes official unveiling will be taking place at an event in Mumbai on November 15, so we won’t have to wait too much longer to find out more. Regardless, it looks as though Mahindra is getting serious about its Jawa reboot with its new retro-styled roadster. Whether or not it has the goods to become a serious challenger for Royal Enfield remains to be seen.