Thailand based Tyga Performance has made a name for itself over the last twenty years, since its inception, with its eclectic mix of race-oriented parts, accessories and full bodywork kits – and it’s just unveiled its latest project, a super trick Honda RS250R that’s been kitted out for the road. Very cool. 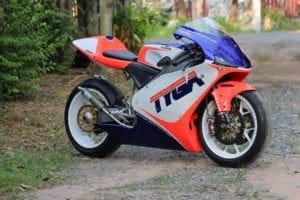 Historically, Tyga’s projects have always involved turning a road bike and a race replica or a track bike – but this time it’s the other way round. It got its hands on a Honda RS250R GP machine, and fitted it with a range of aftermarket parts to get it ready for the road. And here it is, Tyga’s very own RS250R-S

For the uninitiated, the RS250R was a racing machine manufactured by Honda to compete in the 250cc class of the Grand Prix motorcycle World Championship. It was conceived as a production racer for customer teams and privateer riders, and debuted in 1984 as a development prototype, racing in the domestic All Japan Road Race Championship and some rounds of the World Championship. Oh, and TYGA want to make it clear that no show quality GP bikes were harmed during the making of this project – so all you purists out there reading this and balking at thought of a RS250R being messed about with can relax. The guys managed to get their hands on a used 1993 model that was missing a few bits of stock bodywork and components – making it the perfect base for their latest project. 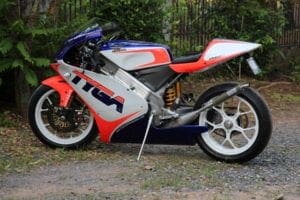 Apart from changes to the wiring loom to allow its lights to be powered, there were a handful of big changes necessary to get the bike ready for the road. First off the RS250R runs open carbs. The later model has ram air and an enclosed air box, but TYGA’s early model had just a tray so everything from stones to flies could be sucked into the carbs. The solution was to install one of the later ram air model enclosed air boxes which TYGA itself produces, and open the inspection door at the front to allow for air to enter via the forward section. And within the air box itself, TYGA installed a sheet of air filter to fully seal the rear part of the air box where the carbs suck. Clever. Next up, its chokes – on a stock RS250R, the chokes are operated by two knobs on the carb bodies themselves, but to make it easier TYGA added a choke lever near the radiator which can be operated via cables.

Another interesting addition is its sidestand. Of course, the RS250R is designed as a pure out and out race bike, and as a result doesn’t (usually) need a stand. But TYGA came up with a novel solution, making a bespoke stand itself, which tucks behind the bikes front fairing when not in use.

As you’d expect, it’s a well kitted out machine, with Brembo GP4-RXs linked to the Brembo 19RCS master cylinder via a HEL brake system, and an Ohlins shock at the rear – but other than that, the chassis modifications are mostly small, detail oriented changes. Wheels are a pair of beautiful, white rims supplied to TYGA exclusively for the bike. Other TYGA components include a set of stainless steel exhausts with carbon/kevlar silencers, a CNC step kit, a 3D printed fuel filler cap. 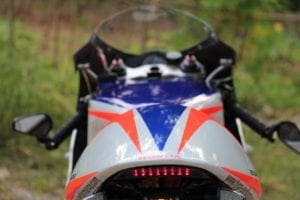 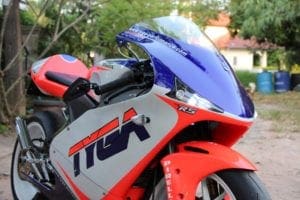 Of course, the bodywork made by Tyga Performance from carbon with a Kevlar layer on the inside is the main event. It’s a gorgeous bit of kit. The seat cowling is an adaptation of the TYGA Performance RGV 250 (BPFT-9026) unit, and it comes with a carbon registration holder and turn signals. Inevitably, there are a few details we haven’t touched upon – but if you want to find out more about Tyga Performance’s incredible new Honda RS250R project, click HERE.