Electric bike builder Energica showed up at EICMA 2018 with an impressive range of new electric racing motorcycles. But in addition to the brands latest 150mph electric superbike, the Ego Sport Black – it also revealed its futuristic new concept bike which has been built in partnership with Samsung, the Bolid-E. 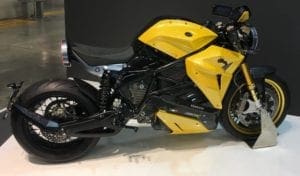 Energica’s prototype demonstrates a number of advanced new technologies co-developed with South Korean tech giant. First off, it comes with a pair of Samsung Galaxy devices mounted as ‘intelligent mirrors’ which run a live feed from high-definition cameras which are integrated into the front and rear of the Bolid-E. And in addition to showing a live rear view like a standard mirror, the dual displays can also work like a ‘Heads up Display’, analysing and highlighting obstacles and threats on the road ahead. Plus, the mirrors can also be used as an action camera, allowing riders to relive exciting moments on the track. Clever stuff. 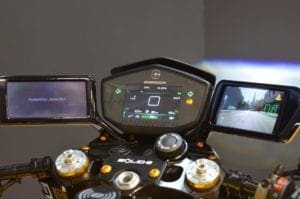 Another clever feature is the bikes compatibility with Samsung’s new Galaxy watch. Essentially, the Bolid-E has been designed to use the Galaxy watch as a smart unlocking device – and you can even grant permission to unlock the bike with other Samsung watches, which is basically the digital equivalent of lending a friend a set of keys. That’s not all; the Samsung Galaxy watch can also be used to locate the Bolid-E in a car park. And there’s even an accompanying app which has been designed to offer live mapping. 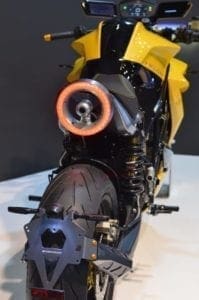