The route of the next Dakar Rally has finally been announced – and it looks like we’re in for an awesome ride when the action kicks off on January 7th.

Off-road adventurers have until January 7th to study the official Dakar Rally maps before setting off on an epic adventure through Peru – across sand, dunes and desert.

The Dakar Rally returns to Peru’s extensive desert plains for another year, following on from the 2018 event which kicked off in the South American country for the opening six stages, before heading to Bolivia and then Argentina. But this year, the racing’s all in Peru. 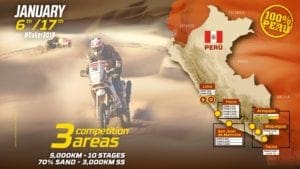 In total 334 vehicles will turn up in Lima for the start on January 7, and they’ll all be hoping to make it back to the capital city after 5,000 kilometres of intense racing – including a special 3,000km stage that we’ve been told will be remembered for its unequalled intensity. We can’t wait.

The 41st edition of the Dakar Rally takes place over 15 days in January 2018, kicking off on the 7th. For more information on the Dakar Rally, click HERE.