Met Police commissioner Cressida Dick defends new tactics to tackle ‘moped’ gangs. “We’ve had to put the fear back into the criminal.”

The Metropolitan Police’s tough new approach to ‘moped’ crime was unveiled at the end of last month, with dramatic footage of officers ramming fleeing thieves off their scooters in London. So far, the tactic has received a lot of praise from the general public and former officers – despite some people, including Labour’s shadow home secretary Dianne Abott criticising it as dangerous. And now Metropolitan Police commissioner Cressida Dick has come out in defence of the new tactics. 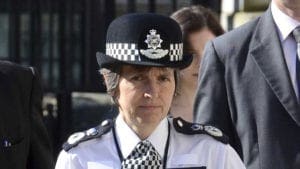 Commissioner Cressida Dick said pursuit drivers are “supremely well trained” and the ramming method has resulted in only a “very small” number of injuries. She went on to day that the tactic has been brought in because the Met has had to “put the fear back into the criminal”.

Commissioner Dick admitted that at least two moped-riding thieves had suffered broken bones after being rammed by police cars – but went on to defend the tactic and her officers. She added: “My officers make life-and-death decisions every day of the week, they’re very accountable. They make the best possible decisions. We are in a risk business.”

Ms Dick said the freedom to ram scooters was brought in to deter moped crime. “We’ve had to put the fear back into the criminal. These are people who have been repeatedly left in no doubt whatsoever that there’s a police car right behind them. If you look over your shoulder and drive on as fast as possible, putting the public in danger, you should expect we will come after you.”

TO CHECK OUT THE ORIGINAL STORY (INCLUDING VIDEO), CLICK ON THE LINK BELOW.