A film producer has just released a largely unseen interview with Barry Sheene from 1982 – and it includes some fantastic quotes from the British racing legend, including him remembering a time he had to steal diesel from a construction site in Munich to get to a Grand Prix in Austria in 1971. It’s well worth a watch if you’ve got twenty minutes to spare.

Originally filmed as part of a video magazine called Bike Rider in 1982 – by Nick Harris, Bill Gamon, and Dave Knowles – the exclusive interview took place at Sheene’s home near Gatwick airport, and is intercut with some excellent helicopter and on-board racetrack footage. 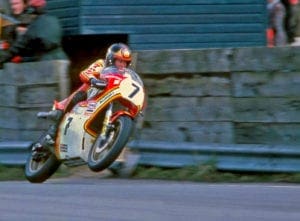 In the interview, Sheene talks about his respect for Kenny Roberts as well as his on-track battles with Giacomo Agostini and John Cooper – as well as going into detail about his racing philosophy; to ride as fast as possible, and preserve the bike (and his body) wherever possible.