Triumph’s new Rocket III has been caught out testing in Spain ahead of its 2020 release – and from what German magazine Motorrad says on its website the new bike is all-new with a lump of weight lopped of it and a bigger engine to kick out more power and torque than ever before.

After falling foul of Euro 4 regulations in 2018, Triumph is gearing up to
release a revitalised version of its Rocket muscle cruiser for 2020. Ok, so the
news that there’s a Rocket on the way isn’t particularly surprising; earlier
this year it revealed a factory custom (TFC – below) which will be sold in limited
numbers and we’ve been bringing you news on the new Rocket for years now. 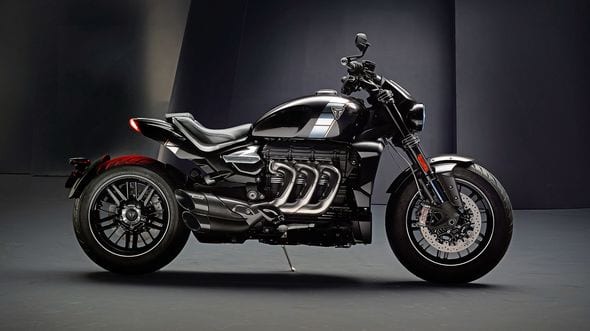 But now we know that this is the finished 2020 production machine in the
flesh – and we know the tech spec for the bike, thanks to the chaps at
Motorrad.

From what we can see in the photographs, the new Rocket III will feature two
round headlights, a bulging fuel tank, and a (comparatively) slim line rear
end. But it’s the Rocket’s engine that’s the main point of interest.

Motorrad says that the new monster cruiser from Triumph has a completely
redesigned three-cylinder 2,458cc engine which will kick out in excess of 170hp
(old bike’s bhp was 146), and over 162.26ftlb of torque (old bike’s torque was
about the same). If that’s correct, that would make the Rocket’s Triple engine
the most powerful series production motorcycle engine currently being
installed, as well as being the most powerful engine Triumph have ever built. 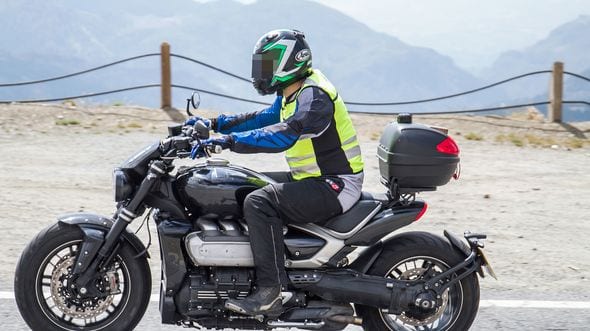 Motorrad goes on to say that the bike’s been on a heavy diet too, thanks to
its new single-sided swingarm and aluminum frame – with it now weighing 290kg
dry instead of the old bike’s 334kg. And to stop the thing it’ll be kitted out
with a set of Brembo brakes.

We’re expecting an official reveal of the bike from Triumph later this week. Expect the above to be confirmed at that point. We’ll probably get a price for the bike, then, too.

You can see the original Motorrad article by clicking HERE.