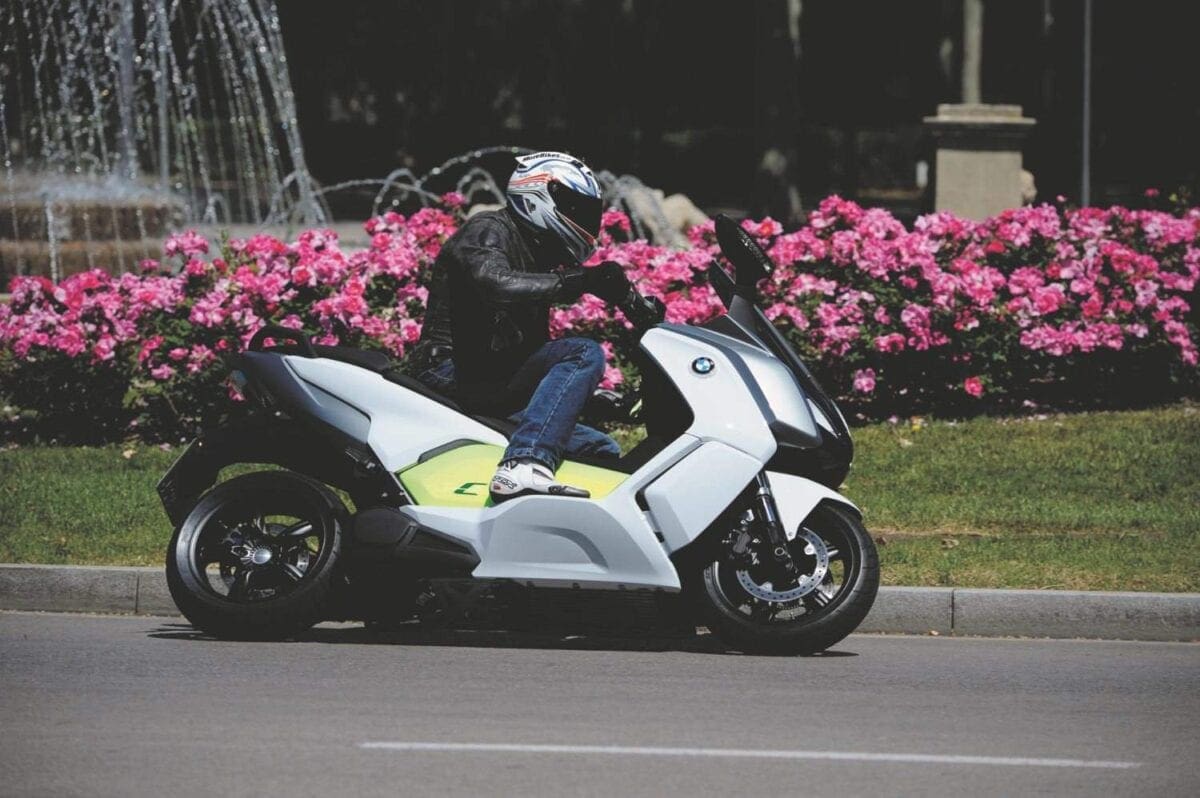 It’ll do 75mph, has a range of over 60 miles and takes just four hours to charge from flat.

This is the BMW C Evolution. From a distance it looks like any other maxi-scoot, but it’s powered by batteries. Three of them, to be precise. BMW broke the ice on the zero-emissions concept three years ago, with a prototype released for test the following year at the 2012 Olympics. But this final production version is in another league to any previous incarnations, making the grade as the most sophisticated electric scooter to ever go into mass production. 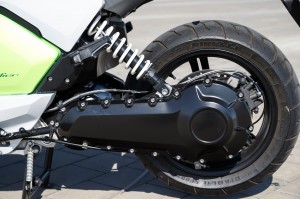 This scooter slots into BMW Group’s sustainability strategy, meaning the C Evolution’s been privy to synergies in development with BMW Automobile’s ‘I’ endeavours – the sophisticated i3 electric car being released last year. In fact, it shares the same type of battery as the four-wheeler, only housing five modules less. On the C Evolution, the three cells are caged together within a super-toughened aluminium casing, ensuring none of the 36 prismatic lithium-ion cells can cause any harm in the event of a malfunction or accident. So well-built is the housing – which also doubles as a hybrid monocoque-type frame to which the swingarm and headstock mount – that it has met the ISO26262 standard for functional safety and ECE R100 standard governing high-voltage safety – the first electric two-wheeler to do so. But it’s not just safety which sets the C-Evolution apart; it’s the level of tech on-board.

Turn the key and the large graphical dash comes to life. There’s an e-power reading on the right showing how much power you’re taking from the battery when you’re on the throttle, whilst on the left you get the regenerative measure, showing the charge that’s being put back into the 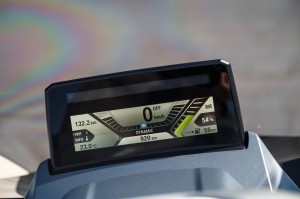 battery as you coast along. The power’s recouped by the electric motor’s generator which automatically applies drag torque to the rear wheel whilst coasting or when the brakes are applied – giving a similar feel to engine braking – and converting kinetic energy into an electrical charge. The degree of regen is governed by your preferred rider mode, each of which are calibrated differently. The C-Evolution has four modes: Sail; Dynamic; Road and Eco. You toggle through them by holding the mode button on the right bar, in turn highlighting your displayed option.

Along with time, trip and temperature, there’s also a reference to battery duration, and your remaining range in miles. The scooter also features reverse, traction control and a side stand handbrake.

If you’ve never ridden an electric scooter, you should know that they accelerate like crazy (yet with no noise). Despite being homologated as a learner-legal (A1 class) two-wheeler with a measured normal output of 15bhp, the C-Evolution actually produces a peak output of 47.5bhp and has 53 lb-ft of torque on tap, all of which is accessible from zero rpm. In a sprint, it will out-accelerate most 600cc maxi scoots, including its siblings; the C600Sport and C650 GT. Add to that list most of Barcelona’s traffic too.

Riding in Dynamic mode – the most sporty and aggressive of the options – nothing could keep pace with the BMW as it powered itself to the 50km speed limit in just 2.7 seconds. 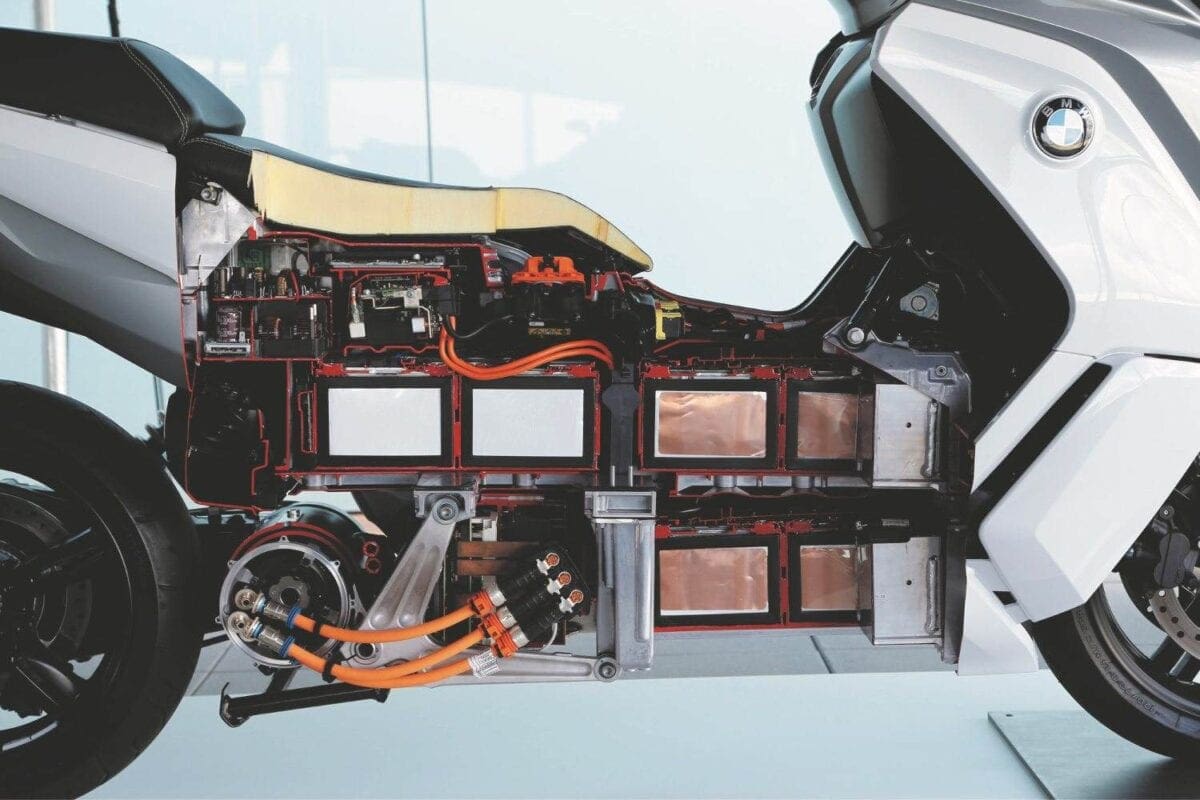 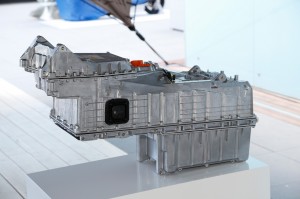 The die-cast aluminium chassis is carried on upside-down 40mm forks, and a single-side swingarm with a pre-load adjustable shock.

270mm discs are bitten by 2-piston floating calipers, with two at the front, and one at the rear, and ABS is standard.

The C Evolution features Torque Control Assist (TCA – a form of traction control), which works by limiting the motor’s torque depending on the varying degrees of slip at the rear wheel, measured by front and rear wheel speed sensors. It’s a simple, yet clever system, and with so much torque on tap from the instant you touch the throttle, it’s essential, especially if riding in town on wet cobbles.

Another way to control the power output is by switching modes: Road is a less aggressive option than Dynamic, yet still feisty and with a slightly less forceful pick-up and reduced drag torque on the rear wheel. Next is Eco. The performance here is massively different, with a far steadier pace and an emphasised amount of drag torque when you’re slowing down. It’s said to extend the batteries duration by 10-20%, which in turn pays off for its lethargic feel.

My personal favourite was Sail mode. Here you get zero build-up of drag torque, with recuperation only showing its head once you’ve activated a brake – prompting the motor to assist in your deceleration. At all other times you simply coast without any engine braking whatsoever. This worked well in town, but was a really great option when we made it to the surrounding hills and suburbs of the Catalan city, where we were able to quickly hit the (electronically governed) top speed of 75mph. 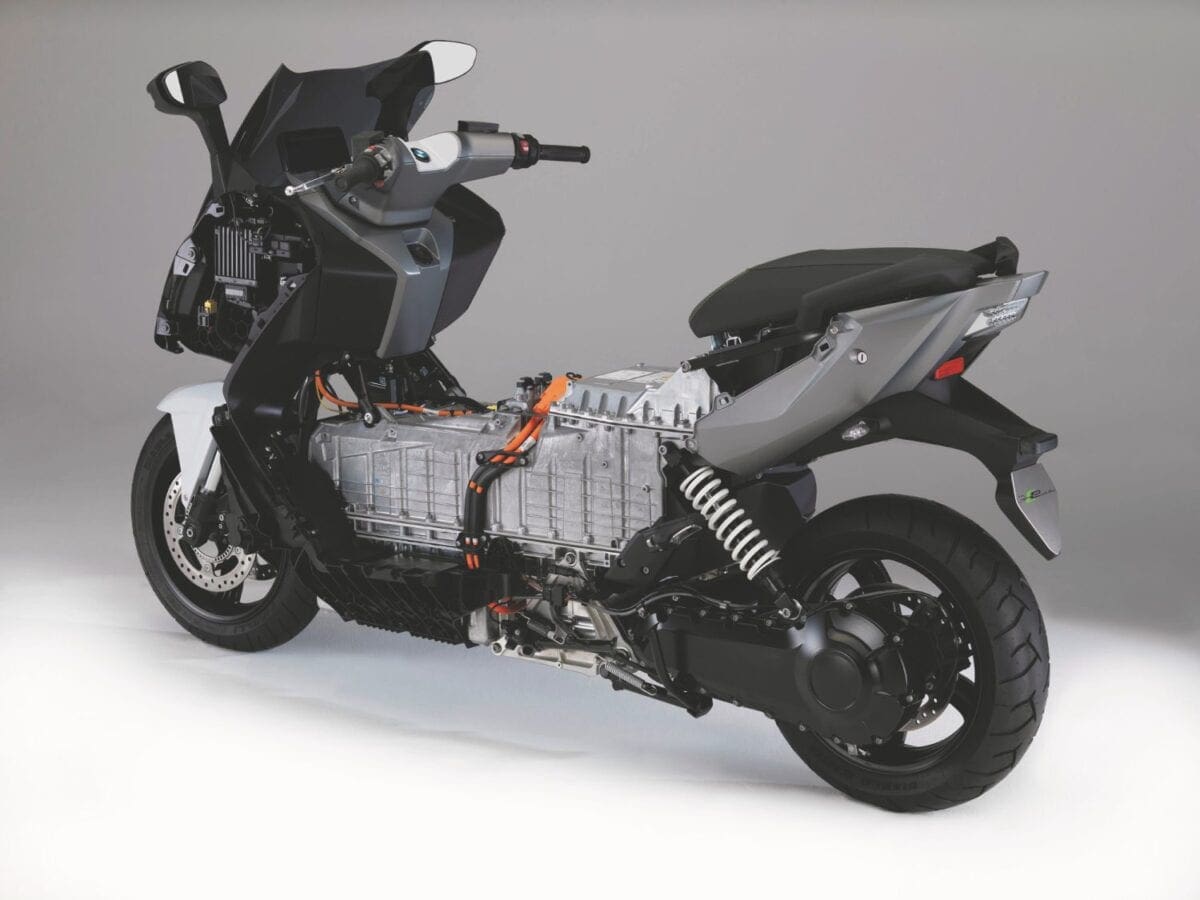 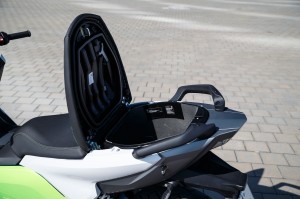 The C Evolution is never going to be a budget buy, but new technology always comes at a price. Of course, there are huge savings to be had in fuel and tax, plus the potential benefits to the environment. It’s also a very practical machine, with a large number of benefits.

In the cockpit area there are two storage pockets, one with a charging socket, while the large pillion seat covers a vast area of fabric-lined space where you can easily accommodate a full-size helmet and a few other small items. The 4mph reverse mode takes some getting used to, but I can see it coming in handy if you’re two-up on a slope. In saying that, despite weighing 265kg, the C-Evolution’s surprisingly effortless to push around. 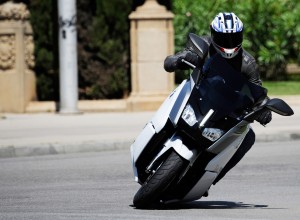 Up in the hills, handling was amazing, while the bike felt really agile in town and very well balanced, thanks to its low centre of gravity. It also proved easier than most conventional scooters to muster around a constant flow of twisties, effortlessly flicking from side-to-side with very little rider input. The machine felt stable at all times, with a plush, if not slightly firm feel to it.

In Sail mode, the BMW also proved exceptionally capable at hovering at a snail’s pace. It was easy to gently nurse the fine calibrated throttle to deliver minimal output from the electric motor, keeping me creeping forward and upright.

After four hours of very varied riding, my battery showed 47% remaining, and I couldn’t help but feel total admiration for this innovative machine. I’ve tested a good handful of electric options over the years, but this is the first which has opened my eyes to a future of e-bikes. If manufacturers can produce vehicles this good, there’s no way they won’t factor into our typical choice of two-wheeler of the future.

BMW says electric motorcycles are still a long way off, but this scooter is readily available in select dealers across the UK. At the price, even if you’re not of the electric vehicle persuasion, you should make a point of trying one simply for the education. The future’s here.