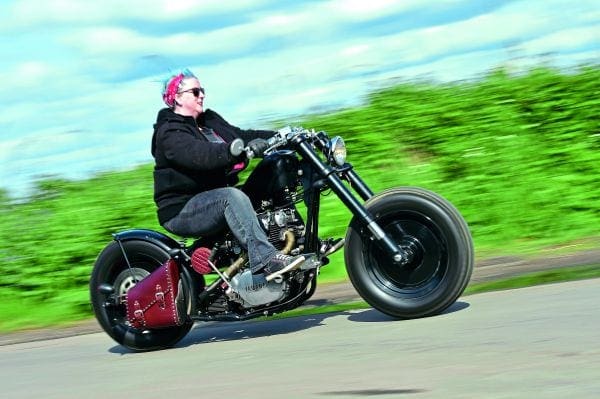 A couple of issues ago we told you about Black Kat Kustoms, the brainchild of Tracey and Andrew Dyke from Shropshire, a leatherworking and bike building husband and wife team.

Despite the fact that they’re generally poorer than shit-house mice (like church-house mice, but with a much poorer diet), they’ve built, on budgets so low you’d laugh if you knew what they actually were, bikes that’ve won awards at the Bulldog Bash and other bike rallies, and been accepted into the esteemed invite-only Radical Bike Show at Pecquencourt too. They’ve set up in business doing bike modifications and building, and leatherwork and upholstery too, exercising their creativity rather than just buying parts off the shelf.

The bike you see here in front of you is Tracey’s and it was built on a budget – a really, really low budget. It’s based on a 1973 XS650 and it’s called ‘BAB’ for two reasons; firstly, it stands for ‘Bad Ass Bobber’, and, secondly, it’s a kind of a tribute to a good friend of theirs, the late Phil Lynch, who was tragically killed by a lorry that hit him while he was out walking his dogs. He was a larger than life character from the Midlands, and he’d always greet you with ‘Hello Bab’. His Harley’d been left with Andrew to do a few modifications to, and to get it running properly, and Debz, his wife, had to sell it to pay for the funeral. Things were really tough for Andrew and Tracey at the time but, after a lot of discussion, they were able to borrow the money from Tracey’s mum and bought the bike.

She (Tracey, not her mum)’d always liked the chunky upside-down forks and solid wheels on Phil’s bike, and reckoned they’d look good on a minimal little bobber. Later they bought a load of stuff, including a few engines and other bits and pieces, from Rob Crocker of the now defunct Crazy Custom Cycles, and then a year or so later another mate, Paul, gave them a Yamaha frame that’d been hardtailed back in the ’70s that’d been in his yard for years. That was the last part of the jigsaw – now they had the makings of a really cool bobber. 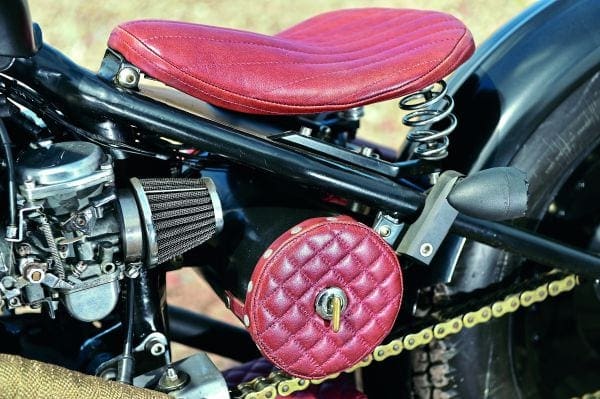 As it was to be her bike, Tracey wanted to be as involved as possible on this bike build. She loves being in the workshop with Andrew, who does the majority of the fabrication, and jumped at the chance to get the grinder on the frame, removing bits that weren’t needed. She also made the seat-mounting bracket on their lathe, and a few other small bits too, and welded it on. Andrew did the rest of the fabrication, as he always does, and their mate Paul sandblasted the frame, and Tracey set about filling, priming and painting the frame (she also painted the exhausts and petrol tank too). She also wrapped the exhausts that Andrew’d made, and using her leatherworking skills made the saddlebag, the seat (pan by Harley Old Skool in Oswestry), the leather ends on the dummy oil tank, and the leather lid on the battery box.

When it was first built, BAB ran so badly. They set out to go to a do in Wolverhampton on what turned out to be a nightmare journey; the XS kept revving really highly, stalling at every junction, and she dropped it while trying to kick-start it. Once they’d got home, they traced it to a leaky carb rubber, so that was easily sorted, but she says she still can’t kick-start it (something I’ve heard a lot of ladies say about XS650s) so there’s a bit of work that needs to be done.

Apart from that, and the fact that the clutch is really heavy and will soon be replaced with a hydraulic Heiden one, she’s really pleased with it. It’s won a few trophies – something that’s really appreciated, especially as it was made up from parts found in the back of their shed. There’re not many new parts, and it was done on a very, very low budget. More importantly, their friend Phil lives on in BAB, and they’ll soon be starting on another bike that’ll be down to him; they’re going to do another bike that will use the engine from his Harley so his memory will live on in two bikes.

Black Kat Kustoms are on 01630 684255 or you can email them at blackkatkustoms@gmail.com or check out their Facebook page. 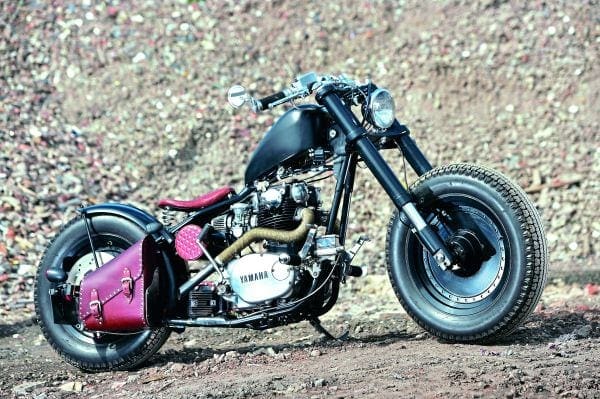