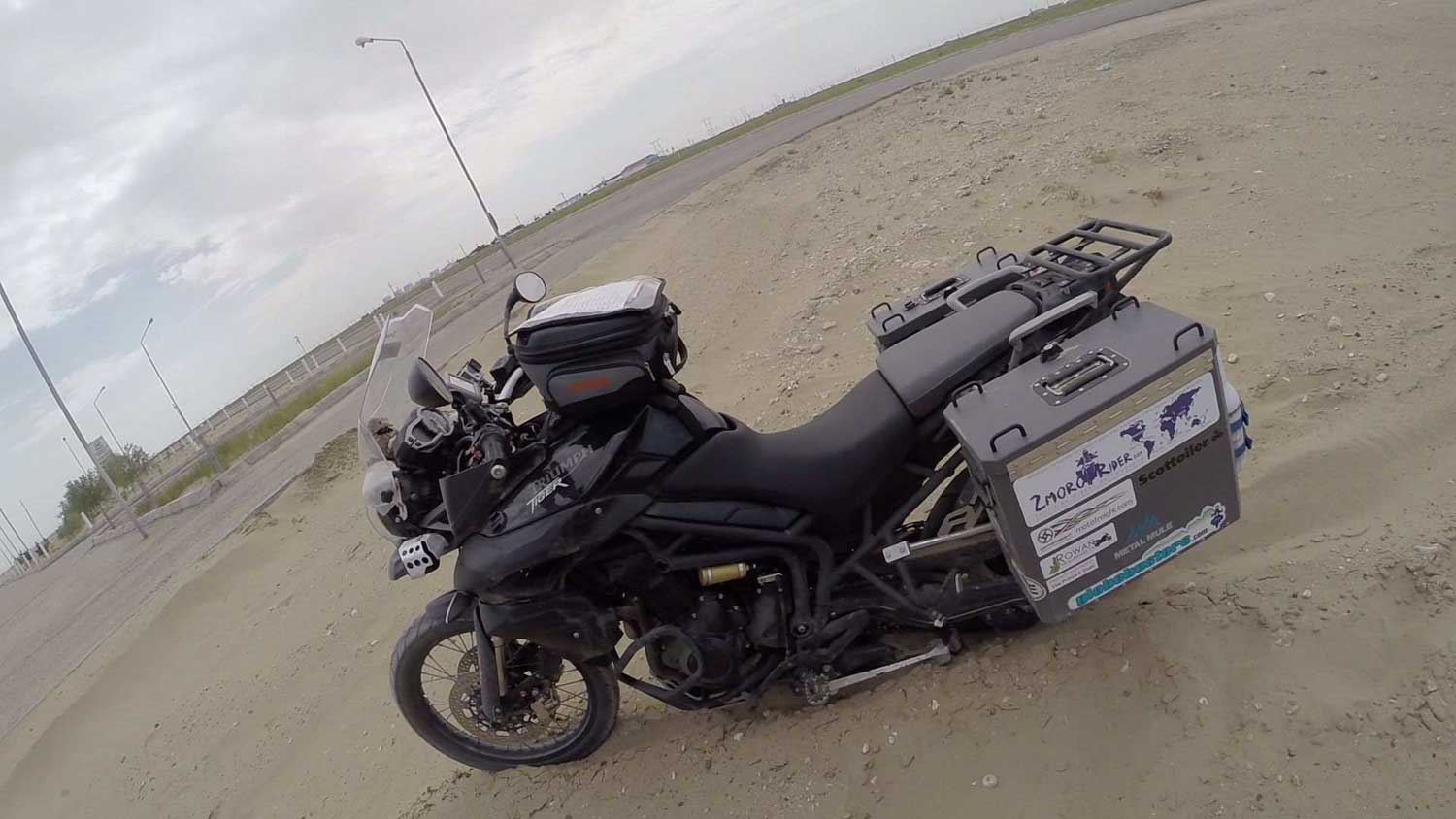 One month after leaving the UK, globe-trotting young British motorcyclist Rhys Lawrey has travelled 5200 miles and reached Uzbekistan, a land-locked country in Central Asia. The 22-year old is attempting to ride into the record books on his Triumph Tiger 800 XC as the youngest person to circumnavigate the globe by motorcycle, and still has another 58 countries and 45,000 miles to cover. 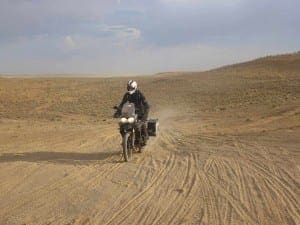 “The last week has been crazy – I’m not sure whether it’s been a dream or a nightmare!” smiles Rhys. “As soon as you step onto the ferry that crosses the Caspian Sea from Azerbaijan to Turkmenistan you realise that you’re starting a whole new chapter in adventure travel”.

Rhys did not receive a warm welcome in Turkmenistan; “I rolled off the ferry at 9pm and was stuck in customs until 7am the following morning. The country isn’t at all tourist friendly and has some weird rules. For example, you aren’t allowed to carry any codeine and a couple of back-packers in front of us hadn’t realised this. After that, the guards decided to be super strict. I had to present my paperwork at 15 different booths around the compound”.

“When you get into Turkmenistan, you see large modern hotels, but they’re empty. Ashgabat, the capital, is called the city of white and gold, because of all the gilded marble buildings. It’s like Vegas, but without the fun! On the other hand, the Karakum Desert is awesome. I camped there to see the ‘Door to Hell’ at night – it’s a natural gas crater that’s been burning since 1971 and is awesome”.

It was in Turkmenistan that Rhys had his hardest day’s riding, including his first fall from the saddle. “It was 40°C and the tarmac on the road was soft enough for heavy lorries to create huge ruts with their tyres, which you really need to avoid on two wheels. You also have to navigate around huge potholes and then there are road works blocking the way, so you must ride around them on a rough gravel diversion. It felt like riding 120-miles off road and it really tested the suspension on the Triumph and the Continental tyres”. 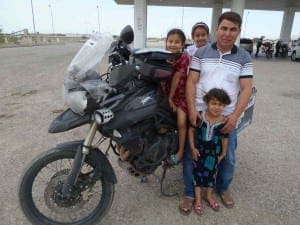 The family that rescued me and my stranded bike!

Petrol is relatively scarce in Turkmenistan and it is important to re-fuel at every opportunity, to avoid running out in the wilderness. This proved to be Rhys’s downfall – literally! “I dived off the main road when I spotted a service station and decided to take a short cut across some dirt, only to discover it was deep sand. The bike sank to it’s axles and I was rescued by a lovely Turkman family, who helped me drag the bike out and then gave me a bottle of Coke to rehydrate me. Having fuelled up, I hit another patch of sand, slowed too much, then over-compensated and fell off. Luckily the Metal Mule panniers saved the bike and I escaped with nothing more than cuts & bruises. It was a real wake up call for how treacherous sand can be.”

Having crossed the border into Uzbekistan, Rhys will ride across the country and into Kazakhstan, where his motorcycle will get its first service before entering China.

Rhys is raising money for The Prince’s Trust, asking for a donation of just £1 for every continent he crosses (up to a maximum of six). You can follow his progress, view his video diaries and make a donation at www.2mororider.com.