Harley-Davidson’s HD350 is coming. And THIS is the bike it’s based on.

We’ve been talking about Harley-Davidson’s HD350 for months – and now it seems we’re one step closer to seeing it in the flesh… as the bike it’s based on has just been launched. 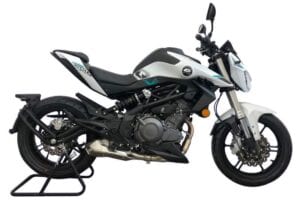 Built by Qianjiang (who also own Benelli), we’ve known for a while that its QJ350 was going to be the base for the first of HD’s learner legal line-up. But with details emerging about the Chinese built machine, we thought details exactly what we know so far.

First of it’s going to be powered by a 353cc parallel twin-cylinder engine – which gets the crankcase from Benelli’s BN 302S and the cylinders from one of QJ’s 500cc engines. It’s expected to kick out around 35hp (which makes it A2 licence friendly) and weigh 175kg. It’s likely that the changes HD makes to the bike are likely to add a bit of weight though. It’ll also get a colour TFT dash, keyless ignition, a Bosch ABS unit, USD forks and twin discs. 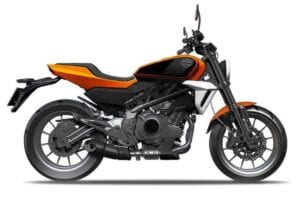 Here’s a graphic rendering of what the HD350’s expected to look like. Pretty cool, don’t you think?

At this stage, we know the Harley-Davidson HD350 has been created primarily for the ASEAN (Association of Southeast Asian Nations) market – including Thailand, Indonesia, Malaysia, Singapore and the Philippines. It’ll probably go on sale in India too. We’ve not had any confirmation that the bike will make it over to Europe. While not exactly a given, Harley has been desperate to diversify and recoup some cash from its ever dwindling big bike sales – so we’re keeping our fingers crossed. Expect to see it at the (now digital) big bike shows at the end of this year.