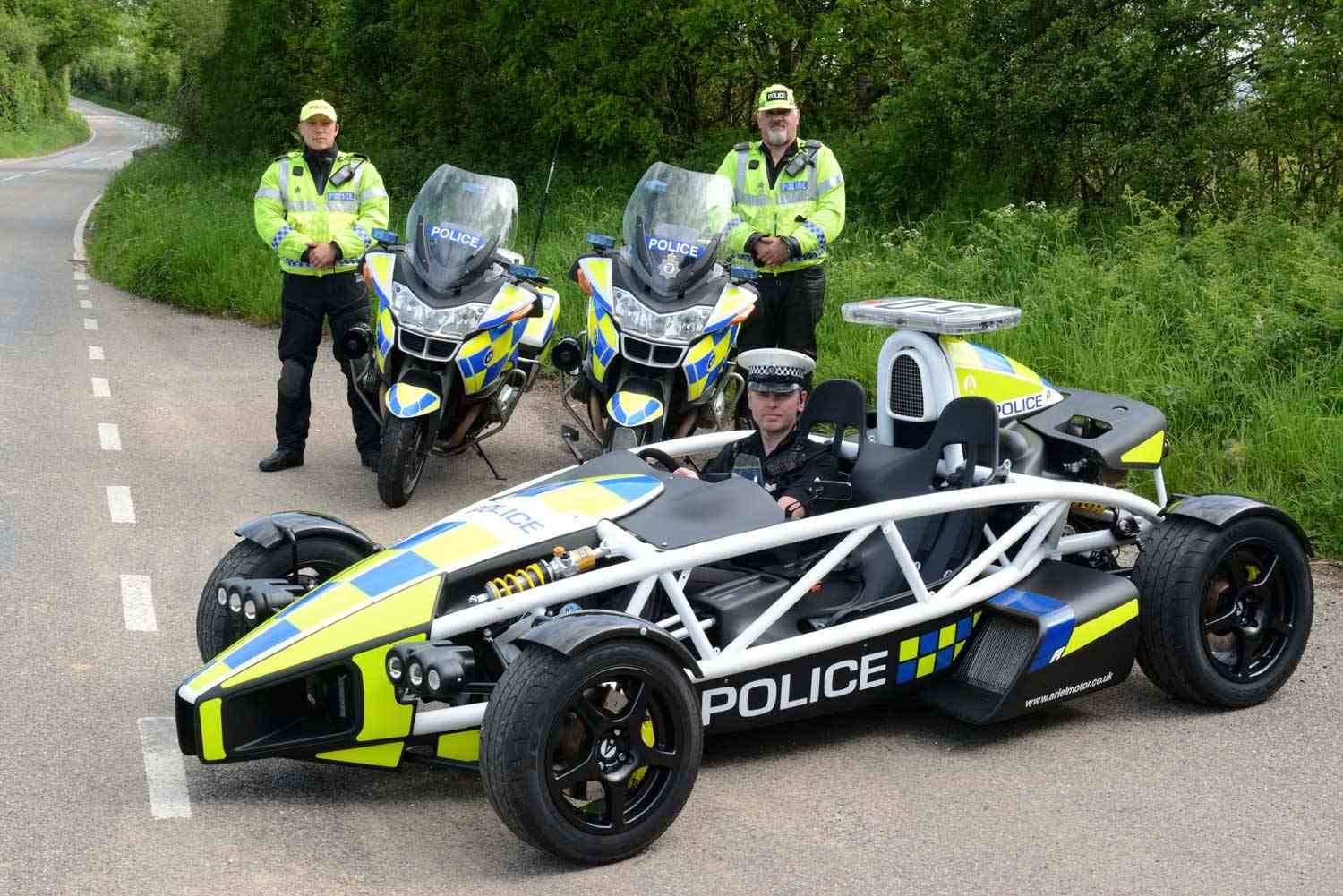 An Ariel Atom, one of the fastest production cars in the world, has been drafted in to support the Avon and Somerset Constabulary and Tri Force Specialist Operations Collaboration’s ‘SAFER RIDER’ campaign launched this week. While we’re unlikely to see it in many pursuit situations, if it raises awareness of some of the superb Police-led motorcycle training schemes, then we’re all for it. 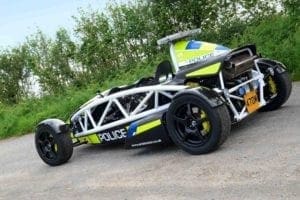 The ‘SAFER RIDER’ campaign, backed by Somerset Road Safety, is aimed at increasing awareness by and for motorcyclists, whose numbers grow considerably during the summer months, and to reduce the number of accidents involving motorcycles.

Motorcyclists represent nearly 20% of the deaths on UK roads. The largest proportion of these is men between 35 and 55 riding bikes over 125cc who account for two thirds of all motorcycle crashes.

Within the Avon and Somerset Constabulary area so far this year seven motorcyclists have lost their lives on our roads, an increase of nearly 30% on this time in 2013.

Andy Parsons, a Roads Policing Sergeant with the Tri Force Specialist Operations Collaboration, who is heading the SAFER RIDER campaign, said: “Motorcyclists make up just 1% of total road traffic but account for nearly 20% of all road user deaths. They are roughly 35 times more likely to be killed in a road traffic collision than someone in a car and we really want to see these numbers reduced.

“Modern motorcycles are capable of extraordinary performance, with supercar levels of acceleration, braking and cornering. Unfortunately with this level of performance comes an increased risk of death or serious injury as a result of inexperience, lack of training and rider error.” 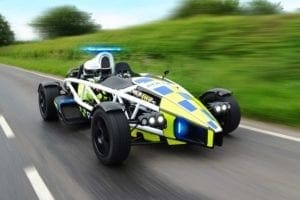 The Ariel Atom, which is manufactured in Somerset has been called the closest thing to a motorbike with four wheels. Holder of various performance records, the Atom has also beaten superbikes in races around a track and can outperform nearly every road vehicle. The car used by Avon and Somerset Constabulary is based on the latest Atom 3.5R fitted with a supercharged 350bhp Honda engine, sequential gearbox and has a 0-60mph time of 2.5 seconds. Fitted with unique Avon and Somerset livery, the latest aerodynamic Hella pursuit lights and emergency equipment, the Atom PL1 is intended to be a highly-impactive engagement vehicle that will send a cautionary message to motorcyclists.

Simon Saunders, Director of Ariel said; “Our business is about going fast, very fast, but there is a time and a place. The Atom is designed to be driven to a race track, where you can drive to your limits in safety and in a professional environment designed for the purpose. The road really isn’t the place to explore your or your vehicle’s limits.

‘We’re just about to launch an all new Ariel motorcycle and we want our bikes and customers to be as safe as they possibly can be as well, so this message is important to us. There’s always one certain loser in a motorcycle collision and that’s the motorcyclist.”

Sergeant Andy Parsons said: “I am really excited that Ariel has joined with us to bring Project SAFER RIDER to fruition, and I hope that the use of the Ariel PL1 with have a positive impact to promote Road Safety in line with our PCC’s Priorities, and help us to reduce road death and serious injury within the motorcycling community.

“To be safe, rider and machine need to work in harmony. “When this happens it feels immediately right. When it doesn’t, things go wrong. Too many injuries and deaths are the result of rider error. Now is your chance to do something about it. Somerset Bike Day has developed from the belief that:- a trained rider is a safer rider.

The ‘SAFER RIDER’ campaign is being launched at Haynes Motor Museum, Sparkford, Somerset on Sunday 8th June from 10am until 4pm.

The Atom PL1 will be on display together with a wide range of different Police vehicles and Police displays. Additionally there will be opportunities to learn new skills and talk to experts regarding the correct use of brakes, slow-riding practice, machine maintenance, further training opportunities and regular First Aid presentations for First On Scene, plus much more at the free event! 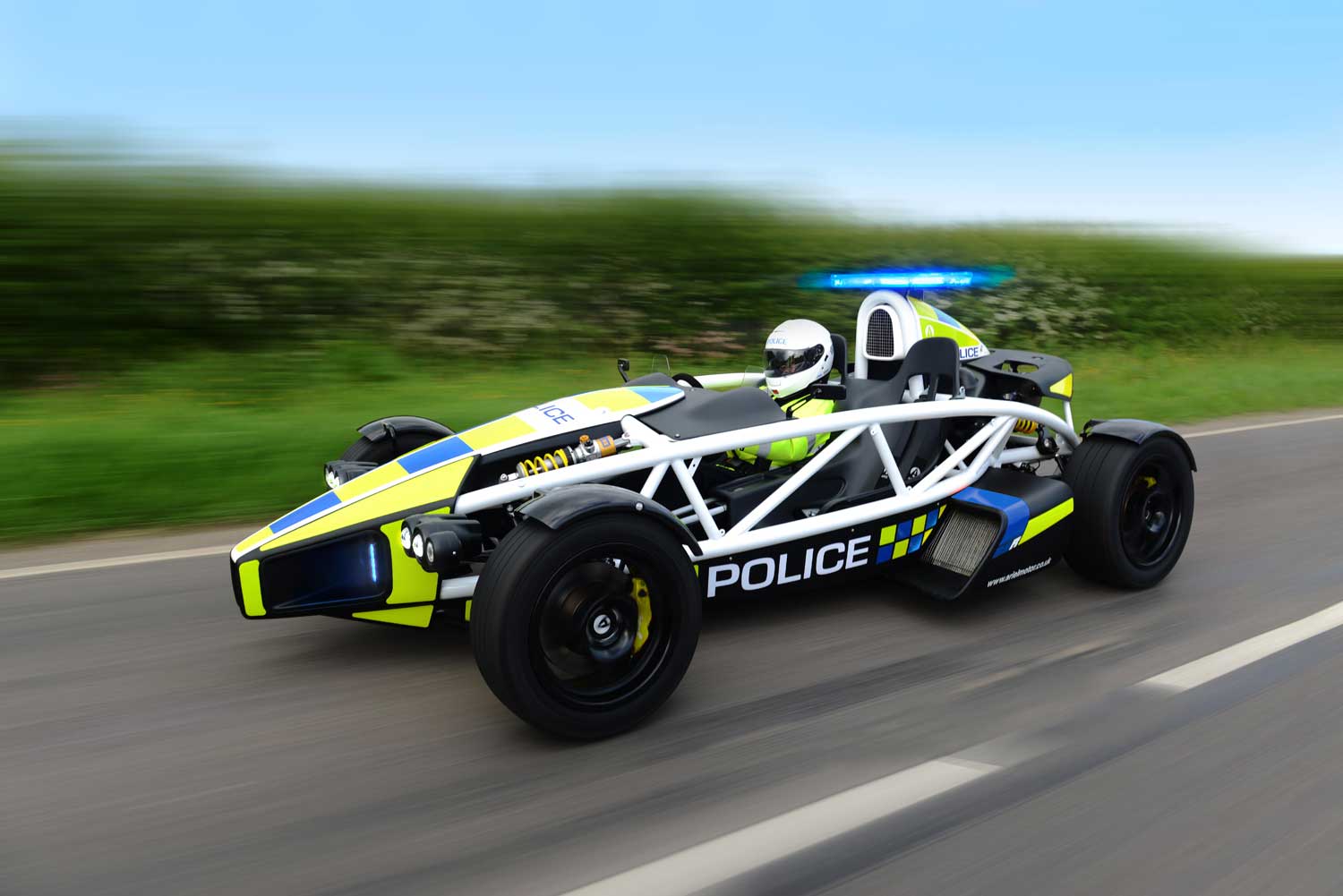