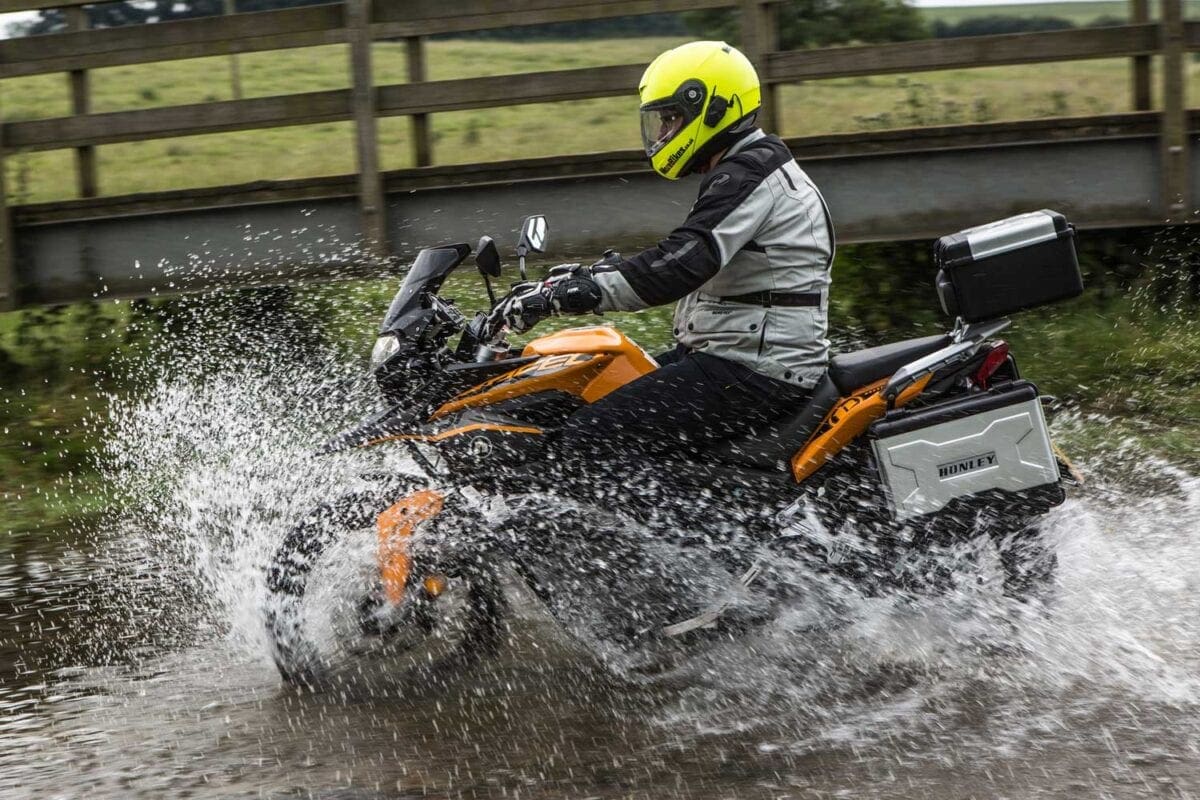 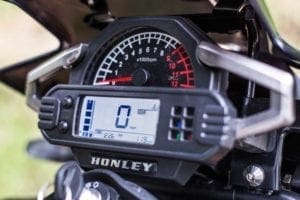 The Honley Venturer RX3 is a great looking A2 compliant bike that works as well (if not better) off-road, as it does on. It’s got the styling of its Bavarian influences, with the price of a used machine.

A steel frame sees the Venturer coming in a few kilogrammes lighter than a new £6195 BMW G650. Unadjustable upside forks and a preload and rebound adjustable shock carry spoked wheels with a single disk front and rear, bitten by two-piston calipers with braided brake lines.

The 795mm seat height is comfortable, while the mirrors are absolutely fantastic, giving a vibration-free view of the road behind. The clocks are clear, with an analogue rev-counter and digital display showing speed, time, odometer, trip and temperature. There’s also a fuel gauge and a gear indicator. 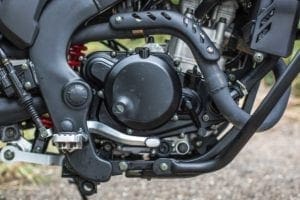 The 250 lump is surprisingly tractable, pulling well in all gears. The six-speed box is smooth and positive, if a little tricky to get into neutral when the engine’s running and the bike’s at a standstill. Slip it out of gear just before coming to a stop though, and it’s no problem at all.

For a while, I found the engine had a tendancy to stall – the impression was of the bike over-fuelling, as it did it during a gear change in a slow corner; just before pulling away at some lights; and as we were taking some photos. A colleague had the same issue, but having chatted with Carli, who also rode it and had no problems whatsoever, I came to the conclusion that it was down to my habit of ‘blipping’ the throttle just before letting the clutch out. This seemed to catch the fuel injection out, and adjusting my riding style eliminated it. For new riders without in-grained bad habits, this shouldn’t cause any concern.

In top gear, the bike is more than happy to cruise along at 75mph, only turning at 7000rpm, with no vibration or discomfort. You have to rev it hard to feel any buzzing at all, and even at the redline of 9000rpm (the limiter is at 10,000), the bike feels fine doing 94mph. During the ride, where I was riding fairly fast for a lot of the time, I still saw 74mpg from the 16 litre tank, which could mean over 250 miles between fill-ups! It’s worth noting though that the speedo appeared to be a little over-enthusiastic, so speed and economy could be about 10% lower. 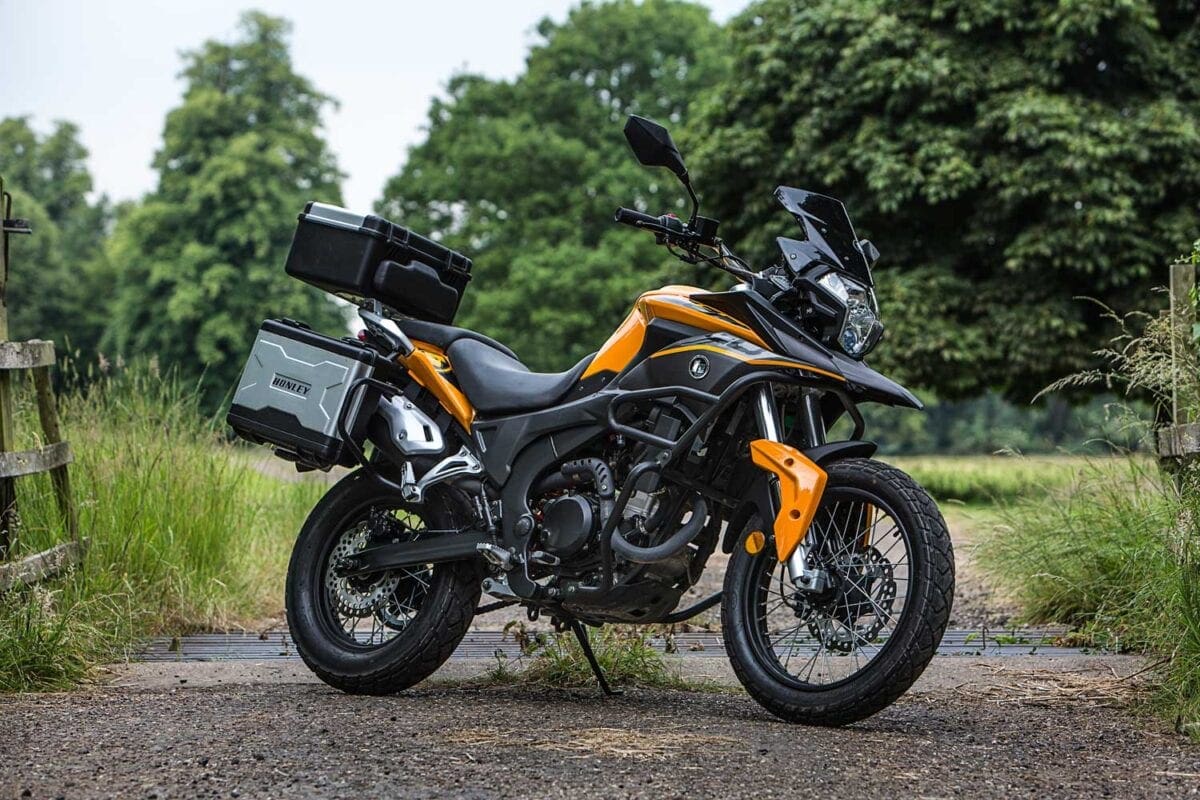 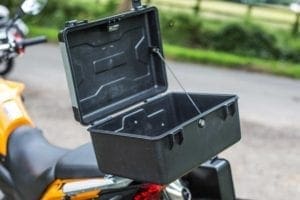 Based on looks alone, this is a great machine, and at the price it’s a good option for riders over 19 who want to get into adventure bikes. Add the fact that it’s a capable off-road motorcycle for trail riding, and it’s a very attractive proposition. The lockable luggage is a valuable addition, and the cargo nets in the panniers make them even easier to use. It’s a shame you won’t be able to fit a helmet in any of the boxes, though something that big could spoil the styling of this bike.

It’s a well put-together machine, but if you look closely you will find some of the small details aren’t quite as neat-and-tidy as the motorcycle’s more expensive European and Japanese alternatives: the fit around the crash bars wasn’t as tidy as it could be, and a couple of the bolts were odd lengths. You do have to be on your knees and up-close to the bike to notice, so if you’re not a detail freak, you won’t be too worried at the price.

The LED indicators look great, but a mate following me on a BMW R1200GS commented that he could only see the top of the indicator over the left pannier – a lower car driver will struggle to see it even more. 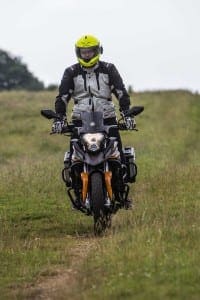 It’s smooth, it’s easy to flick about, and you get a very commanding view of the road. It’s not overly tall, so it’s a piece of cake for most riders to jump on and enjoy.

The engine allows for fairly quick, and hence safe overtakes, which is great for new riders. The brakes are powerful enough, but I did wish for a span-adjustable front lever: when braking hard with two fingers, I would trap my other digits between the lever and the grip, making for a bit of a panic as I forced myself to let go, then grab again with three or four fingers. Train yourself to ride with three fingers over the lever and it’s not a problem.

On twisty B-roads, 4th and 5th gear are perfect, meaning you’re not having to constantly work the gearbox, and while the handling can be a little harsh over fast pot-holes, it’s hard to complain for the money.

Venture off onto some green lanes, and the bike performs superbly. The sculpted tank is perfectly set to allow you to rest your thighs against it, putting your shoulders in the right place: above the bars. It’s very confidence inspiring, and makes for a great all-year round bike, but it also opens up another world of fun on track and trails.

As a 41 year-old with a full licence, I’d probably be in the market for a bigger engine, but I’d have to look at something well used at this money. Leaving the petrol station after filling up with fuel, a lad in his early twenties shouted over to me: “Nice bike mate!” It’s riders like him that the Honley Venturer RX3 is ideal for, and it’s difficult, given the excellent price, not to see the attraction.

“Often I struggle to even get onto adventure styled bikes – at 5’ 6” the high seat heights tend to put me off – however I can get on and off the Honley with no problems. The riding position gives a commanding position with plenty of vision of the road ahead, and with little weight on your wrists it means you can rack up the miles in comfort and make the most of the power from the single cylinder engine.

The engine pulls well and you’re able to keep up with (and overtake) other traffic on the road with ease and confidence using the six-speed gearbox. The suspension has been designed for off-road use in mind so can sometimes feel a little hard on some roads – however the rear is adjustable and it gave the bike character.

It offers a lot for the price tag of £3195 and it’s a good introduction to adventure bikes as it has styling cues of its bigger cousins such as the BMW GS.”