How to balance carbs on your motorcycle

To balance carbs (or synchronise the carburettors) on your bike is simply the process of adjusting the throttle bodies so they pass the same amount of air and fuel mixture to each cylinder. It’s important because a well set-up fuel system will help the bike start easily, run smoothly, and be more efficient. Along with improved throttle response, and a cooler running engine, the benefits make it well worth the effort.

Despite many owners taking their bikes to a mechanic to have the work done, it’s actually surprisingly simple, and the cost of a good quality balancer is less than the labour charge from a main dealer.

The adjustments on my CBR are carried out by three screws that alter the throttle openings for bodies one to three, relative to the throttle position of the fourth body (going from left to right as you sit on the bike).

The fourth carb is directly attached to the throttle, and the third is adjusted relative to this via a small sprung screw between the two units. These form a pair of carbs. The first and second carbs are adjusted relative to each other by another screw, forming the second pair, then these two pairs are balanced against by a screw in the middle of the bank of carbs.

This is one of those jobs that makes more sense as you do it, and is surprisingly easy. In fact, I filmed myself doing it for the first time, which took just five minutes:

If you’ve got a newer fuel-injected bike, don’t assume that this is all irrelevant to you. Synchronising the fuel mixture is just as important, and the process is largely the same. Regardless of what machine you own, investing in a Haynes and/or Clymer workshop manual is well worthwhile, and will guide you through the steps specific to your bike.

Balancing the carbs should be done when the bike is fully serviced – the air filter should be clean, and the valve clearances should have been checked. Anything that affects how the cylinders suck fuel in is going to skew your results. While you have the tank off, also check and replace any perished or split pipes that could cause an air leak.

As you need the engine running for this job, it’s best done outside, as plenty of ventilation is very important for your safety. 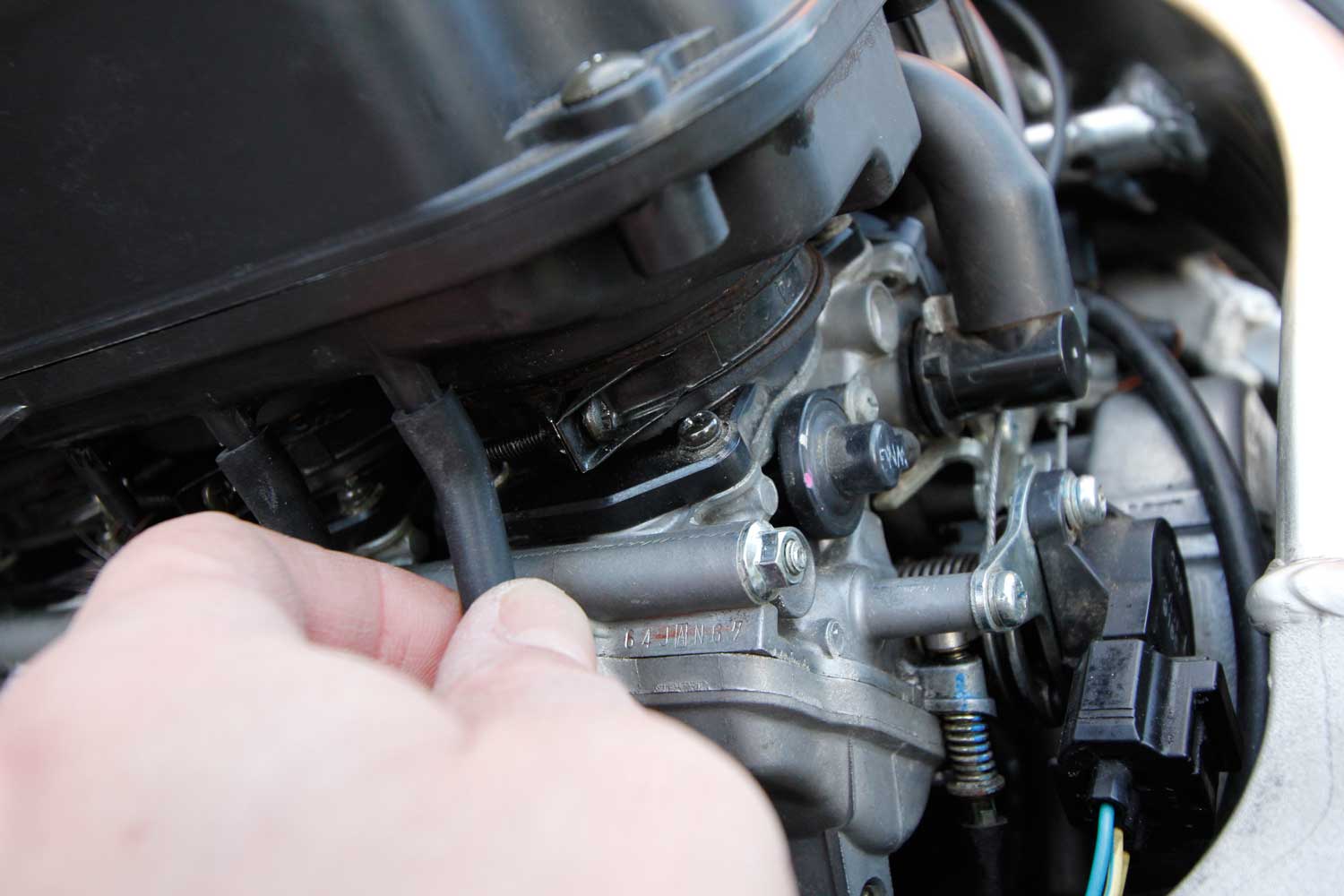 1 The carbs are measured using the vacuum pick-up points on the bottoms of the bodies. On some bikes, getting to these is a bit of a fiddle, and may require adaptors to attach a tube to. On the CBR it’s a piece of cake: four rubber tubes are attached already, and stowed on four blank plugs on the underside of the airbox. Pull one off at a time… 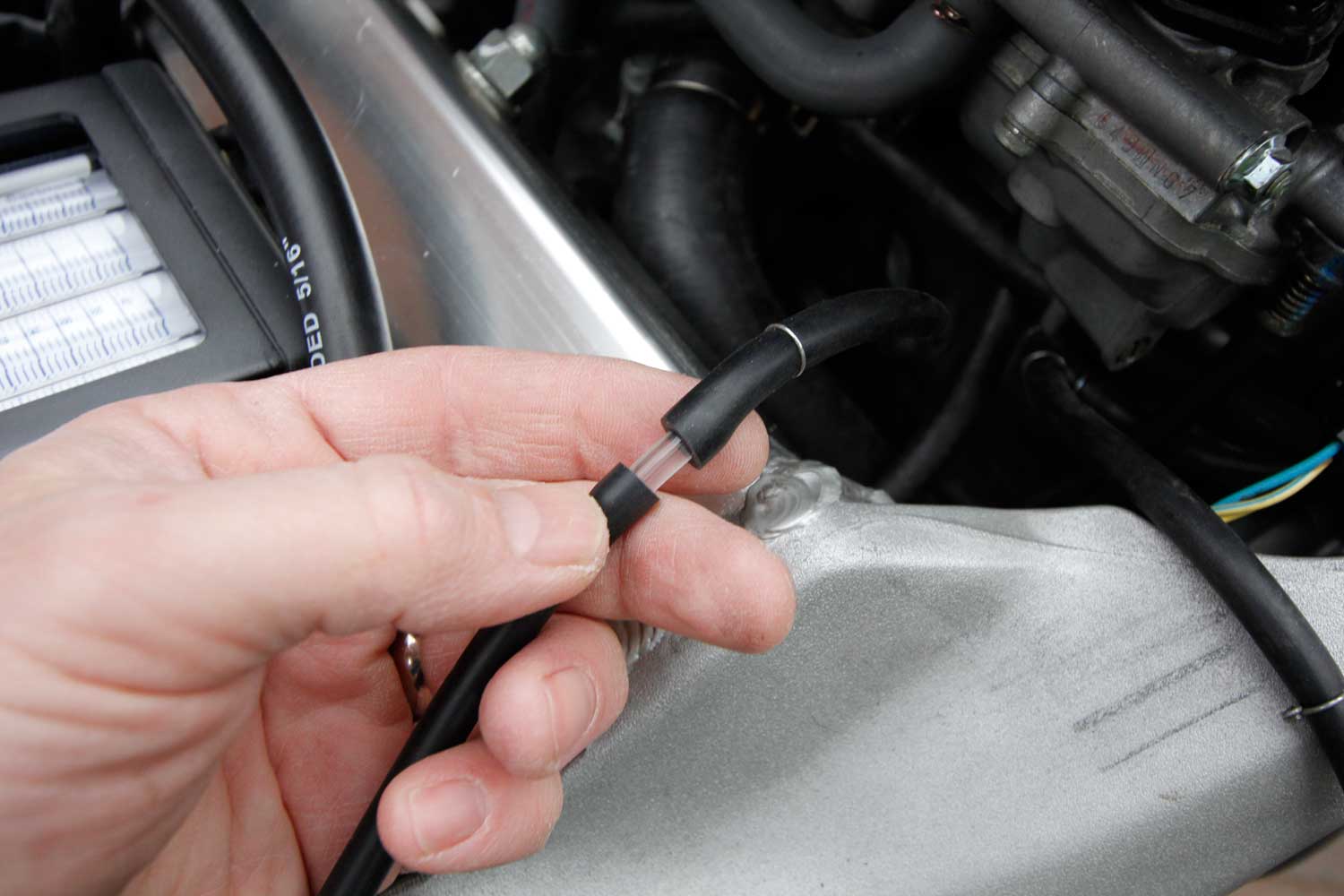 2 The Morgan Carbtune I’m using has ‘damper’ pipes fitted near the ends of the tubes –an ideal point to attach the vacuum pipes fitted to the bike. Link up each pipe, making sure you attach the first throttle body to the first gauge on the balancer, the second to the second and so on. 3 Pop your tank safely on a workbench, and connect it up with a long length of fuel pipe. 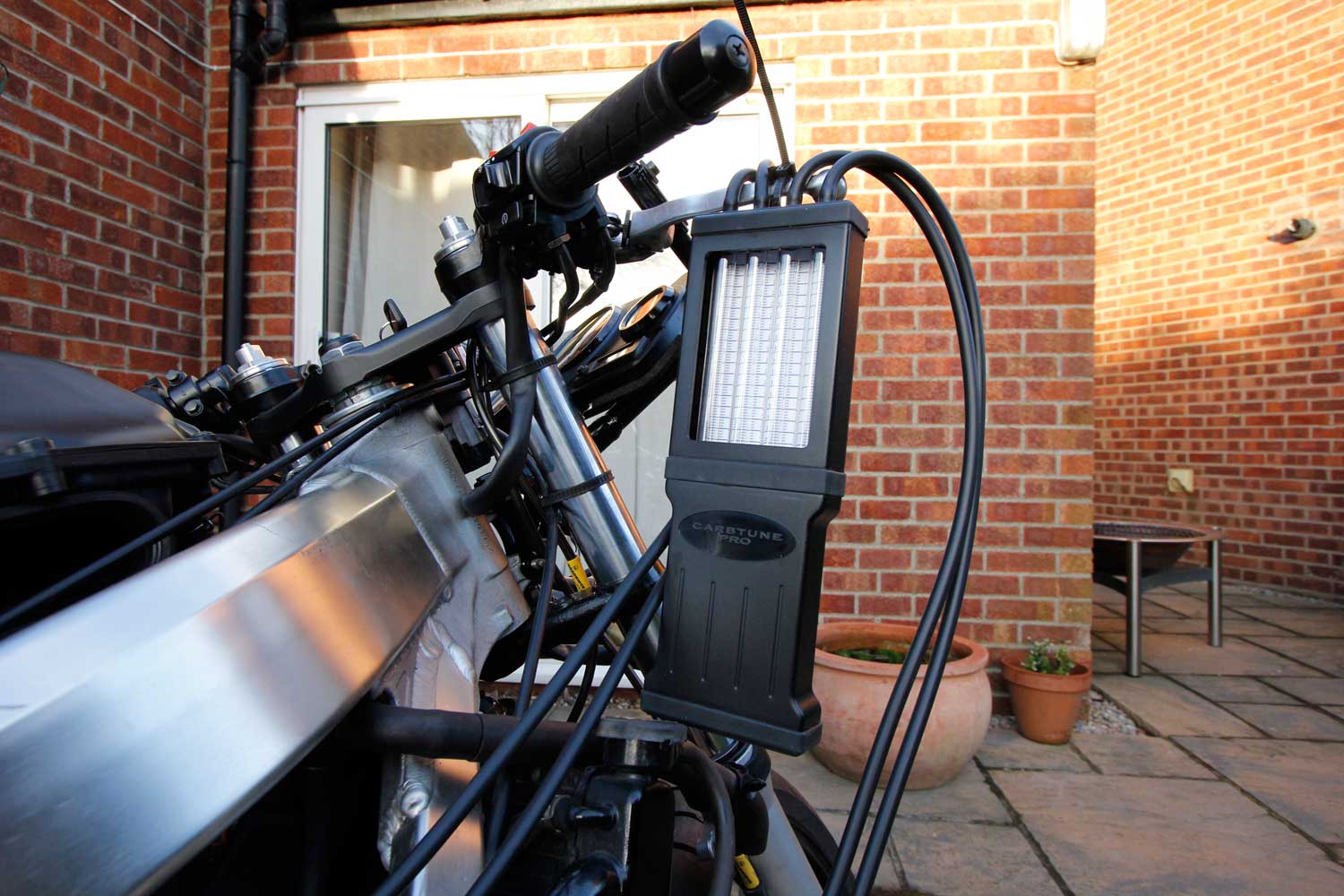 4 Hang your balancer somewhere that’s easy to see while you adjust the carbs – the Carbtune simply attaches to the lever or the handlebar. Make sure that none of the pipes are kinked or trapped. 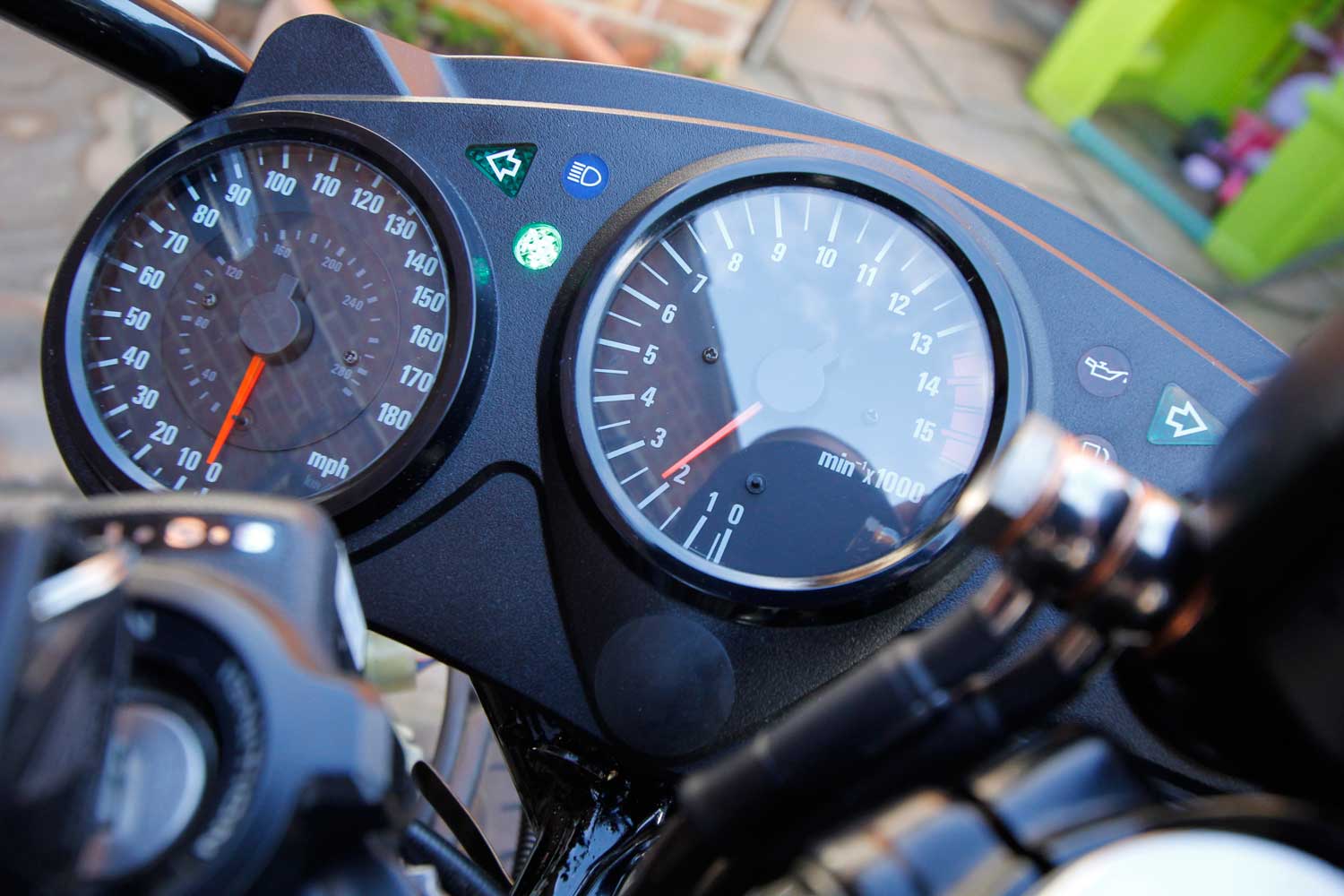 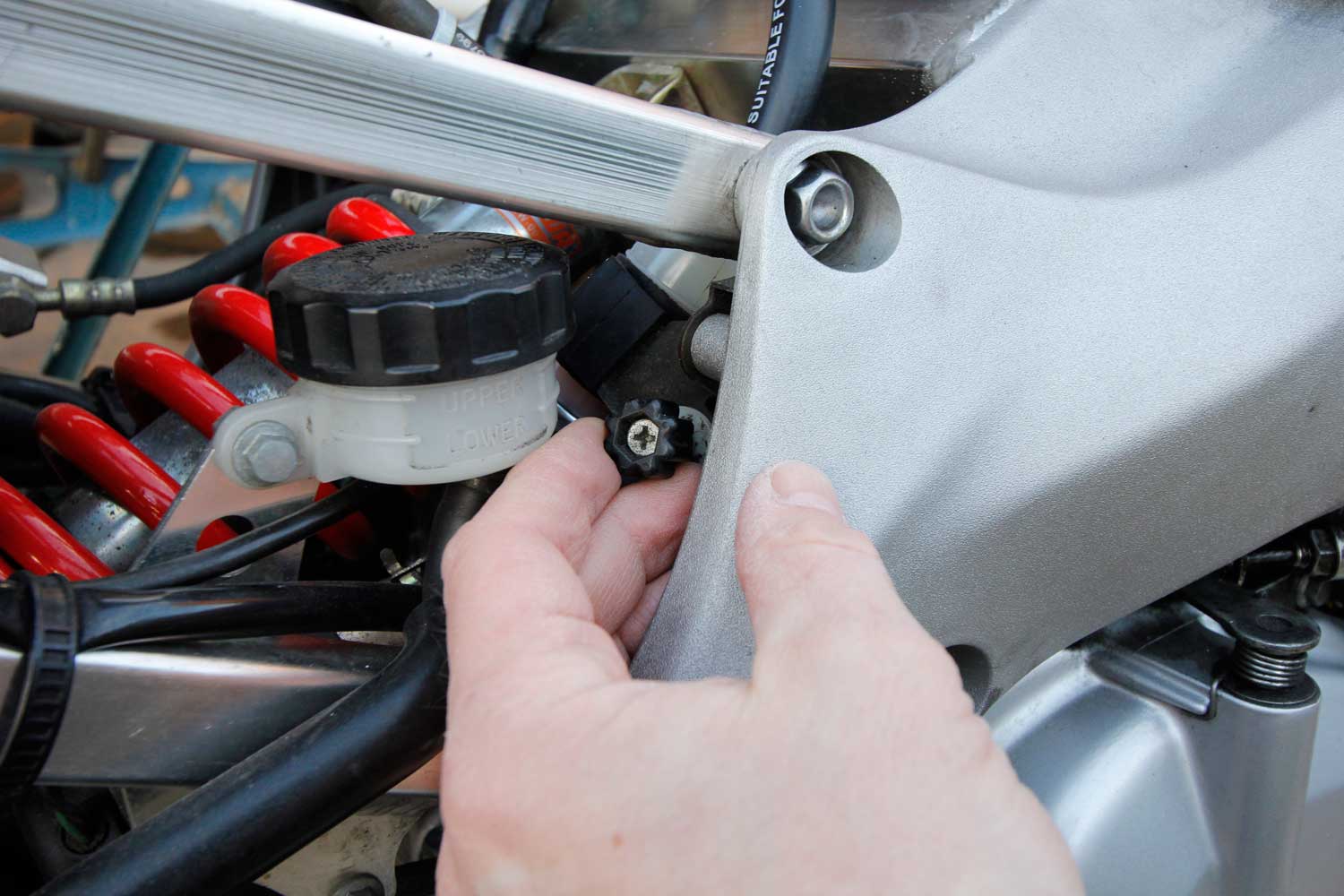 6 Start the engine and let it warm up, then adjust the idle screw to bring the engine speed up a fraction, helping the gauges to run more smoothly. 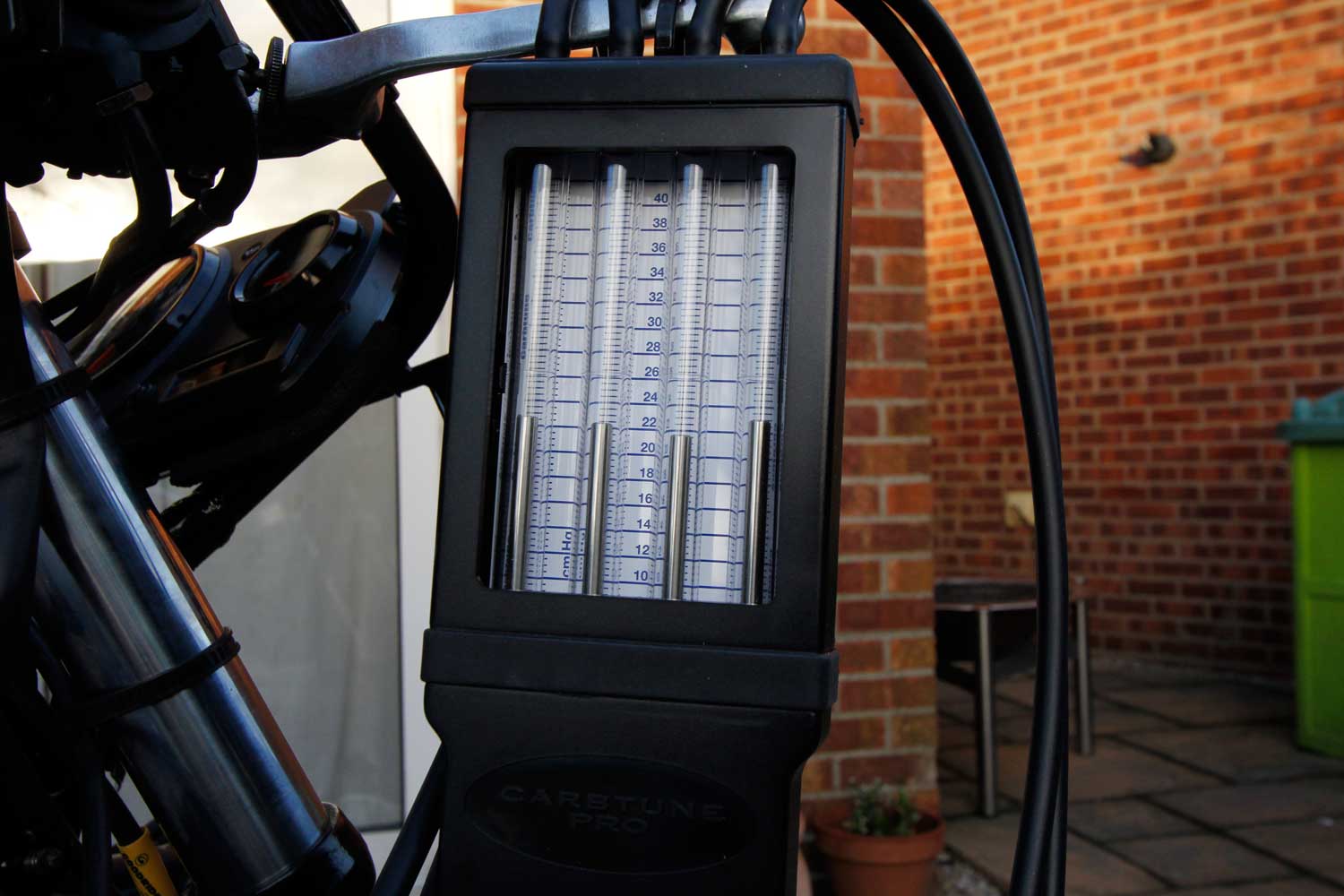 7 Give the throttle a couple of ‘blips’, to make sure it’s settled, then take a look at the vacuum gauge. Each bike manufacturer specifies their own tolerances – on the CBR it’s within 30mm Hg, which refers to the old mercury meters. My carbs weren’t far out, but I wanted them to be spot-on… 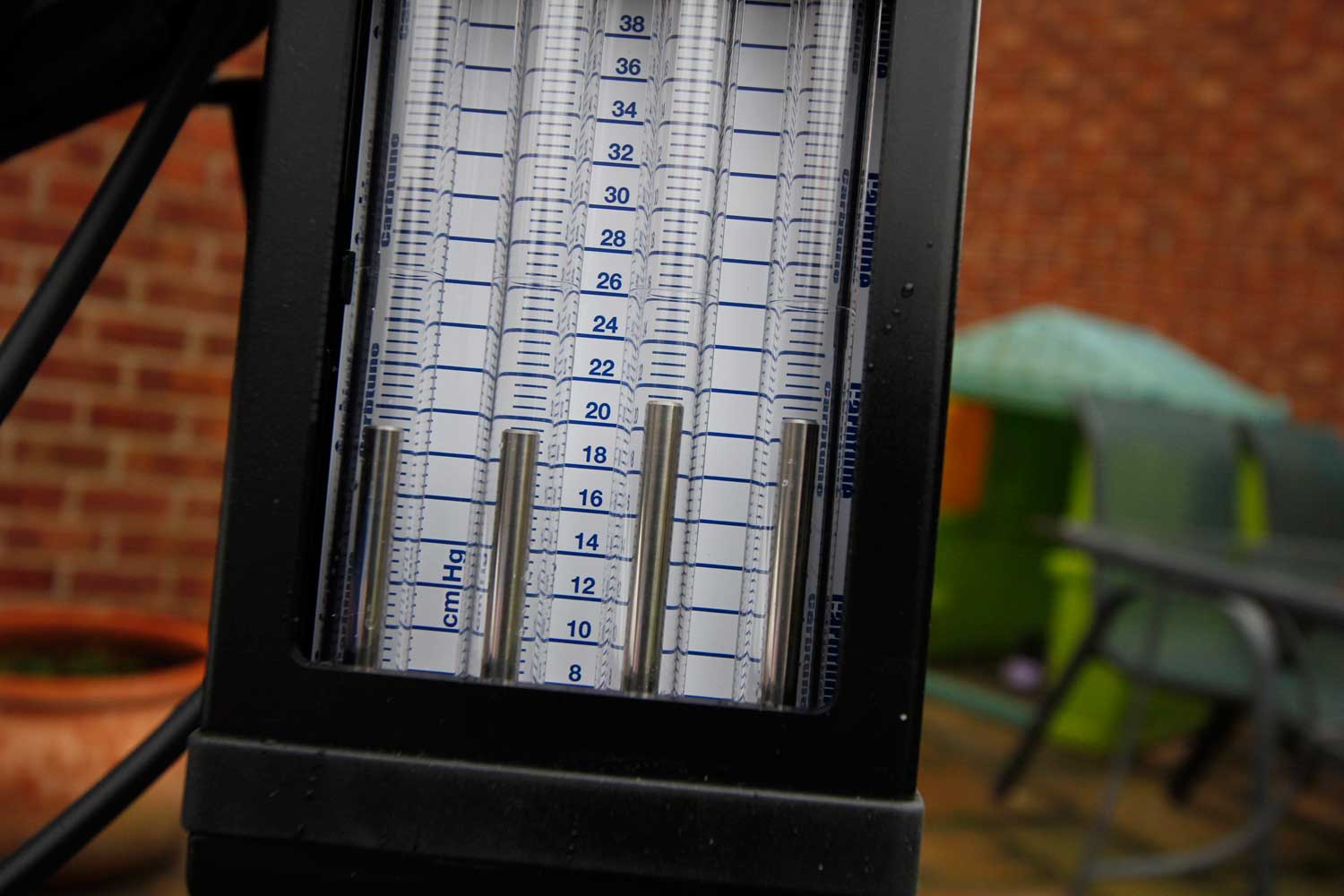 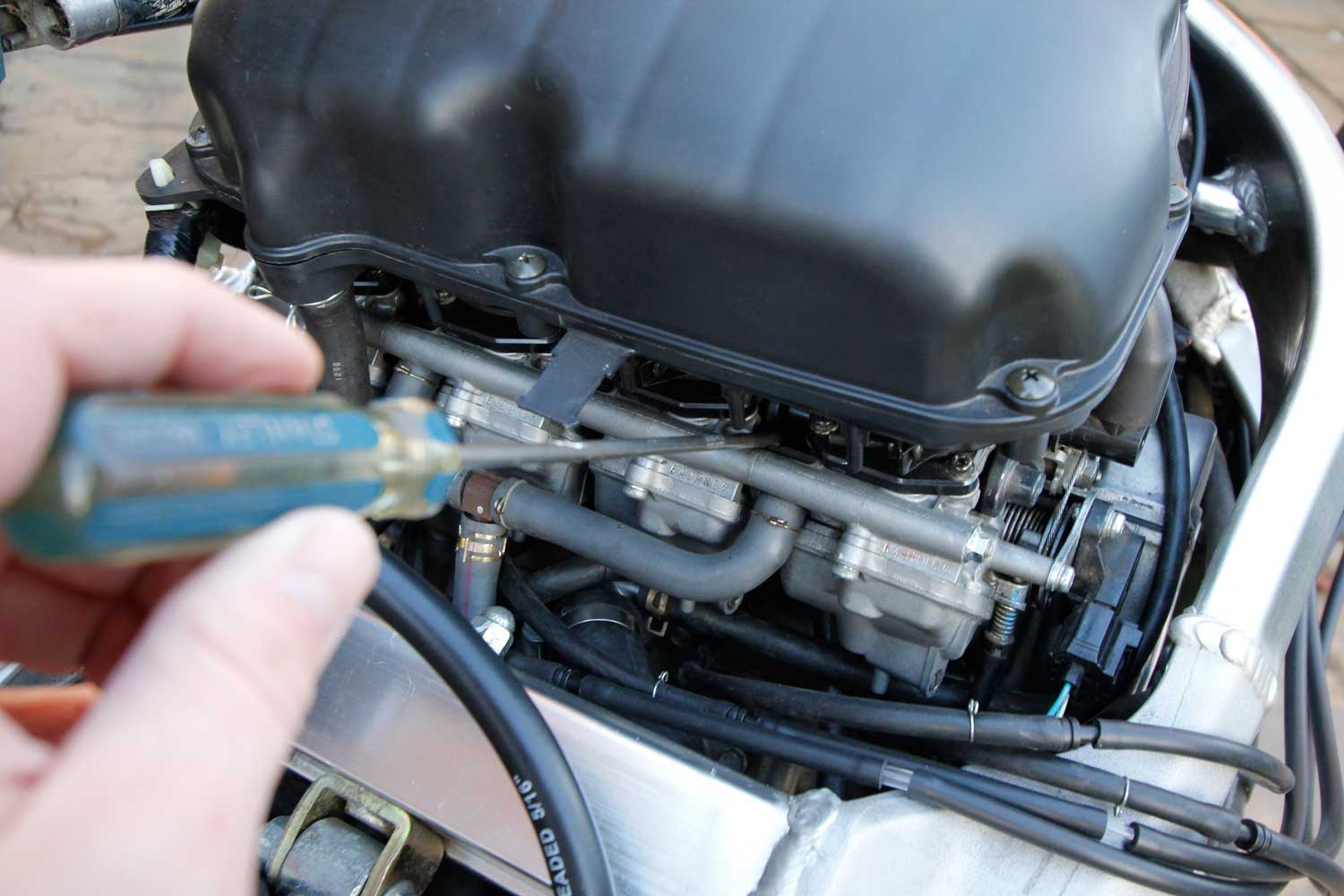 8 Remember that the fourth throttle body is your reference point, so with a long screwdriver, carefully adjust the screw between the third and fourth throttle bodies to get the third vacuum gauge as close as possible to the fourth. Ignore whatever happens to the first and second gauges.
Try to put as little pressure as possible on the screwdriver as you make any adjustments, and always take it away from the screw, and ‘blip’ the throttle before taking your reading. 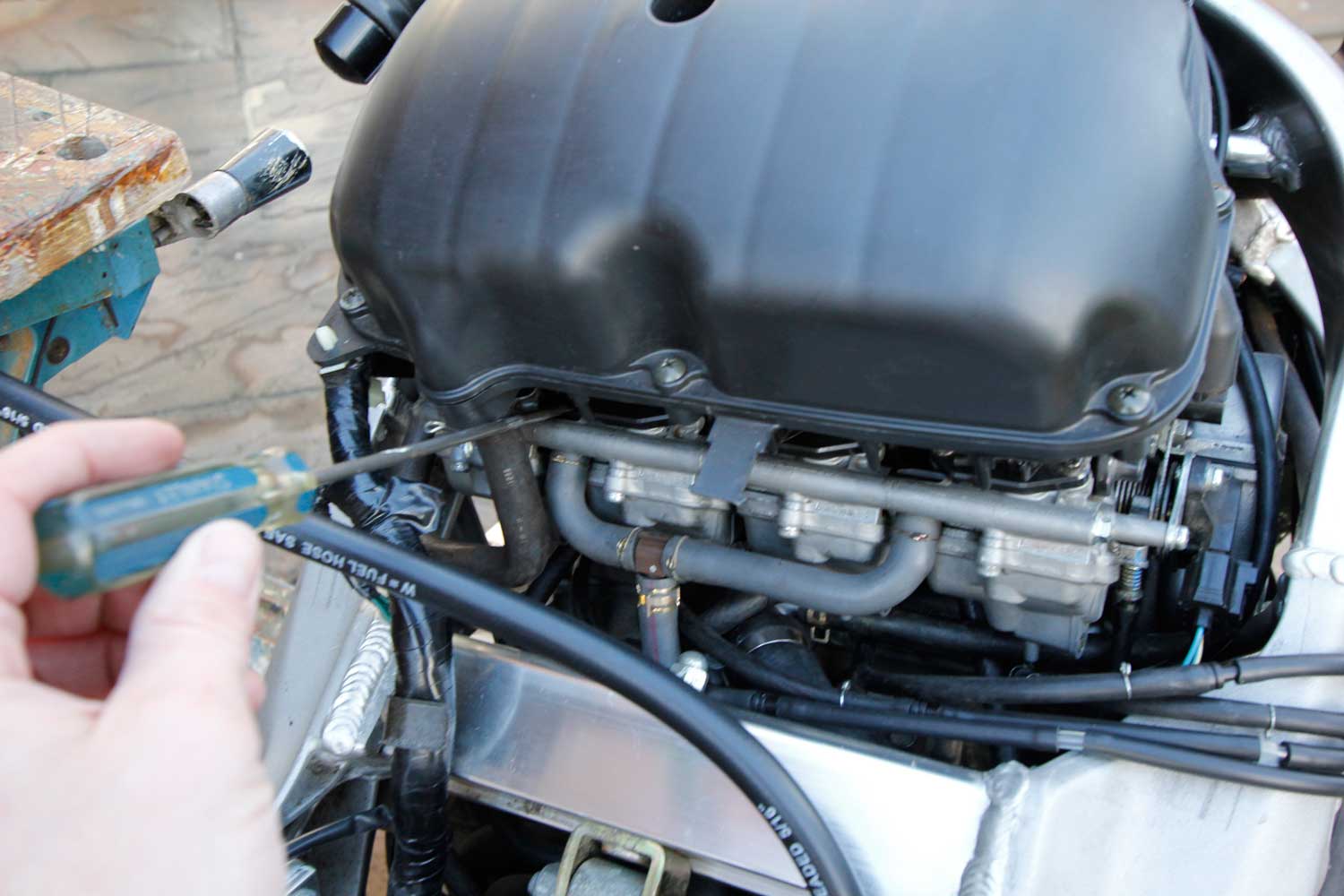 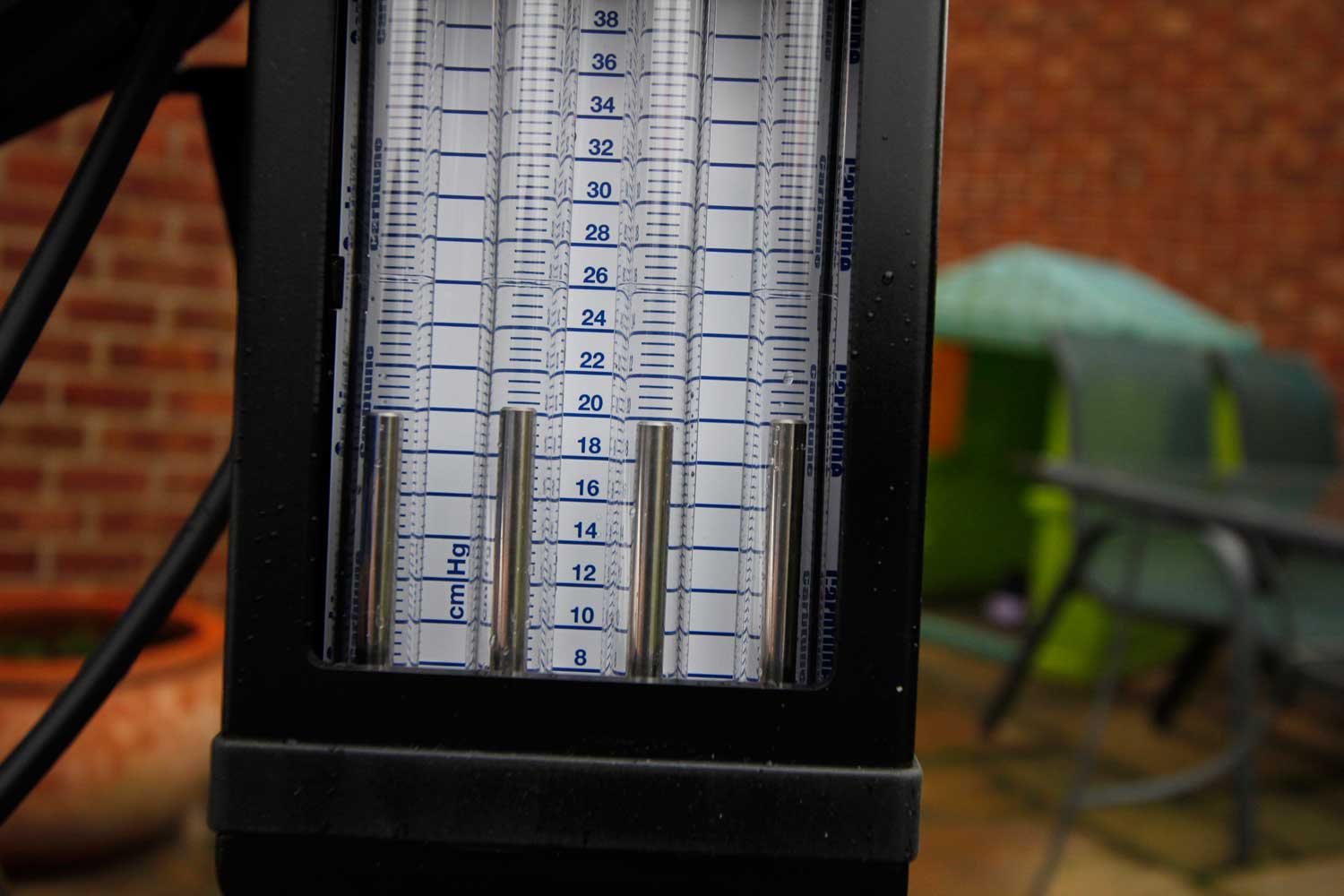 10 You should now have the first carb reading level with the second, and the third carb level with the fourth. The last step is to simply adjust the screw between carbs two and three to balance one and two with three and four. When you’re happy, disconnect the gauge, pop the bike’s vacuum tubes back into place, and refit the tank. It’s as simple as that… Job done!