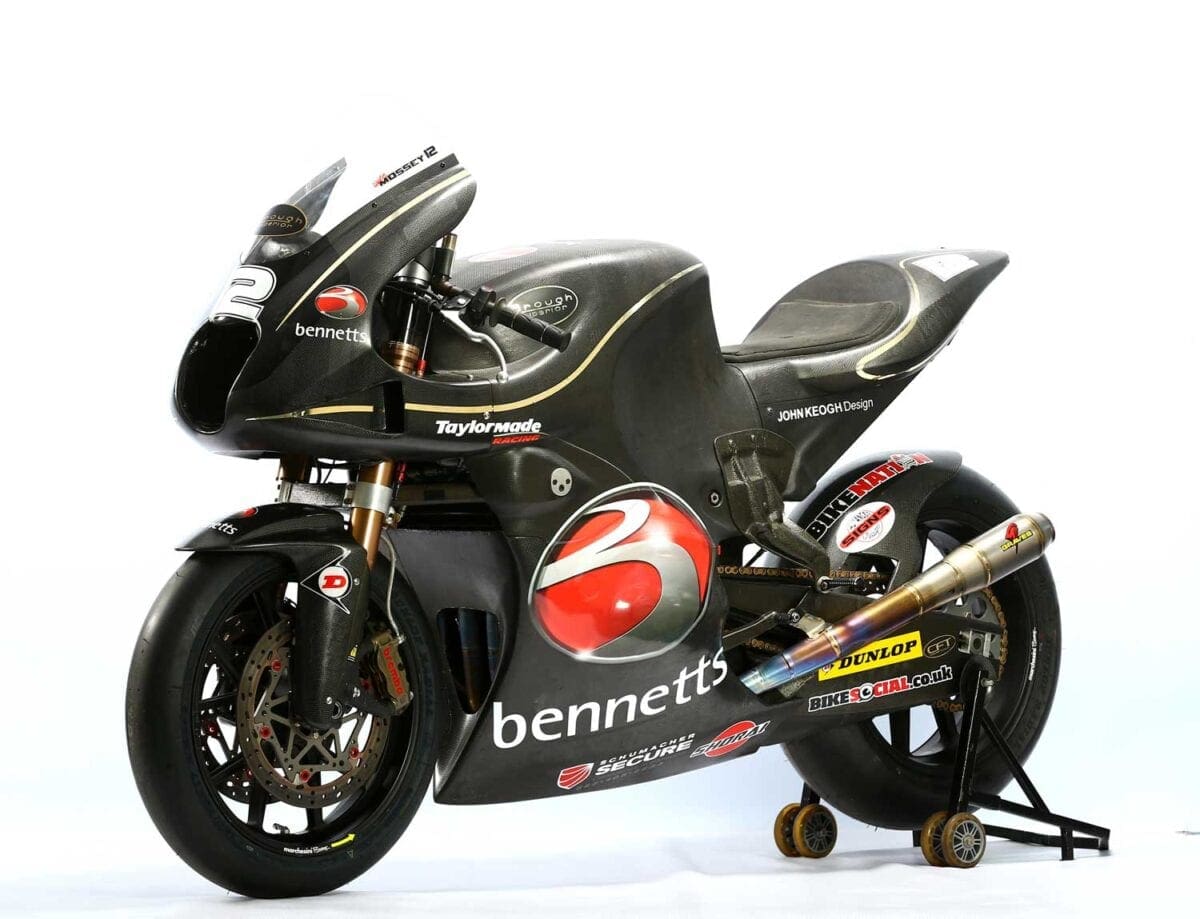 Bike insurance specialists Bennetts are backing the return of the iconic British Brough Superior brand by sponsoring the reborn marque’s one-off entry into the British Grand Prix at Silverstone next month.

Bennetts Brough Superior, as the team will be known, will enter the Moto2 class with rider Luke Mossey competing on board the team’s innovative British-designed carbon fibre Carbon 2 machine.

The project is headed by California-based Brits Paul Taylor and John Keogh, who are running the team on behalf of the soon-to-be relaunched Brough Superior brand. The bike, which has won national level races in the United States, features a unique carbon fibre monocoque design and has received input from famed Formula One engineers John McQuilliam and Steve Nichols. Like all bikes on the Moto2 grid, the Brough Superior will be powered by the standard specification 600cc four-cylinder Honda engine.

Dubbed the ‘Rolls Royce of motorcycles’ Brough Superiors were rare and expensive machines during their 20 year production run from 1920. Famous for their association with Lawrence of Arabia, Broughs acheived numerous race wins and speed records in the 1920s and 1930s. The brand was bought by British engineer Mark Upham in 2013 and the company has plans to sell its new SS100 model early next year, the first new motorcycles to go on sale wearing the famous name in 75 years.

Mossey, a front runner in the British Supersport championships, has already tested the bike in America, before giving the Carbon 2 a first run out on British soil at Silverstone yesterday. The team is planning to undergo one further test, before making its world championship debut at the Northamptonshire circuit on the weekend of 29-31 August.

Paul Taylor, CEO, Taylormade Racing said: “It is really exciting to be partnering with Bennetts to bring the Brough Superior Carbon 2 to the track at Silverstone. The bike has been in development and testing for a number of years and as befitting the iconic Brough Superior name, this is the state of the art in chassis design. We’ve been able to benefit from Formula 1 expertise here in the UK and hope that will make for a very competitive package first time out. Luke has taken well to the bike so we are really looking forward to mixing it up with the regular Moto2 competition to see how good it is.”

Luke Mossey, Bennetts Brough Superior Carbon 2 rider, said: “I can’t wait to race the Bennetts Brough Superior Carbon 2. I’ve ridden it in California and really like the bike – it reminds me of riding my 250GP bikes. I’ve done well at Silverstone, its one of my favourite tracks, so think we can be competitive even though have had less track time than our competitors. Roll on August!”

Mark Upham, CEO of Brough Superior, said: “We are proud to be partnering with Bennetts, a long-established company that George Brough would have known, to show why Brough Superior is an iconic British name! The Carbon 2 is everything George Brough would want in a motorcycle and I’m sure he and TE Lawrence wil be watching from on high and cheering Luke on as his namesake rolls out in front of the British MotoGP fans.”

Paul Taylor, PR and Sponsorship Manager at Bennetts, said: “We are delighted to be working with the team and are looking forward to seeing what they can do at Silverstone. There is a lot of romance around Brough Superior and the project is sure to attract attention around the world, but as much as anything we are just excited to be backing British engineering and design. When it was introduced in 2010, we expected Moto2 to be a place for chassis innovation. Unfortunately that hasn’t been the case and we’re proud to be backing this original design in an otherwise homogenised field. There are no results expectations from Luke and the team, we’re just thrilled to be flying the flag for Britain. There’s no doubt that we are the underdogs, but we like that and hope that the British public will get behind this exciting project.”