The Institute of Advanced Motorists takes a tongue-in-cheek look at how advanced riding skills might have changed the outcome of some of the greatest movie motorcycle chase scenes…
The cinema loves a chase scene – if it’s on two wheels, even better. But quite often these high-octane stunt sequences don’t end too well for our hero, who barely escapes alive. Here are the views of a motorcycle-riding expert on some classic bike chases from the silver screen. Where did the riders go wrong? Is there anything they could have done that would have meant things turned out differently?

Trinity and the Keymaker steal a Ducati motorbike and head off against traffic on the wrong side of a busy motorway, pursued by police and the agents.

Expert view: “They’re filtering far too fast with a large speed differential between the bike and other traffic; any sudden movement by another vehicle could prove problematic (as seen when the silver car changed lanes). You should never accelerate into a closing gap, but wait until you have a clear exit and proceed gently through.” 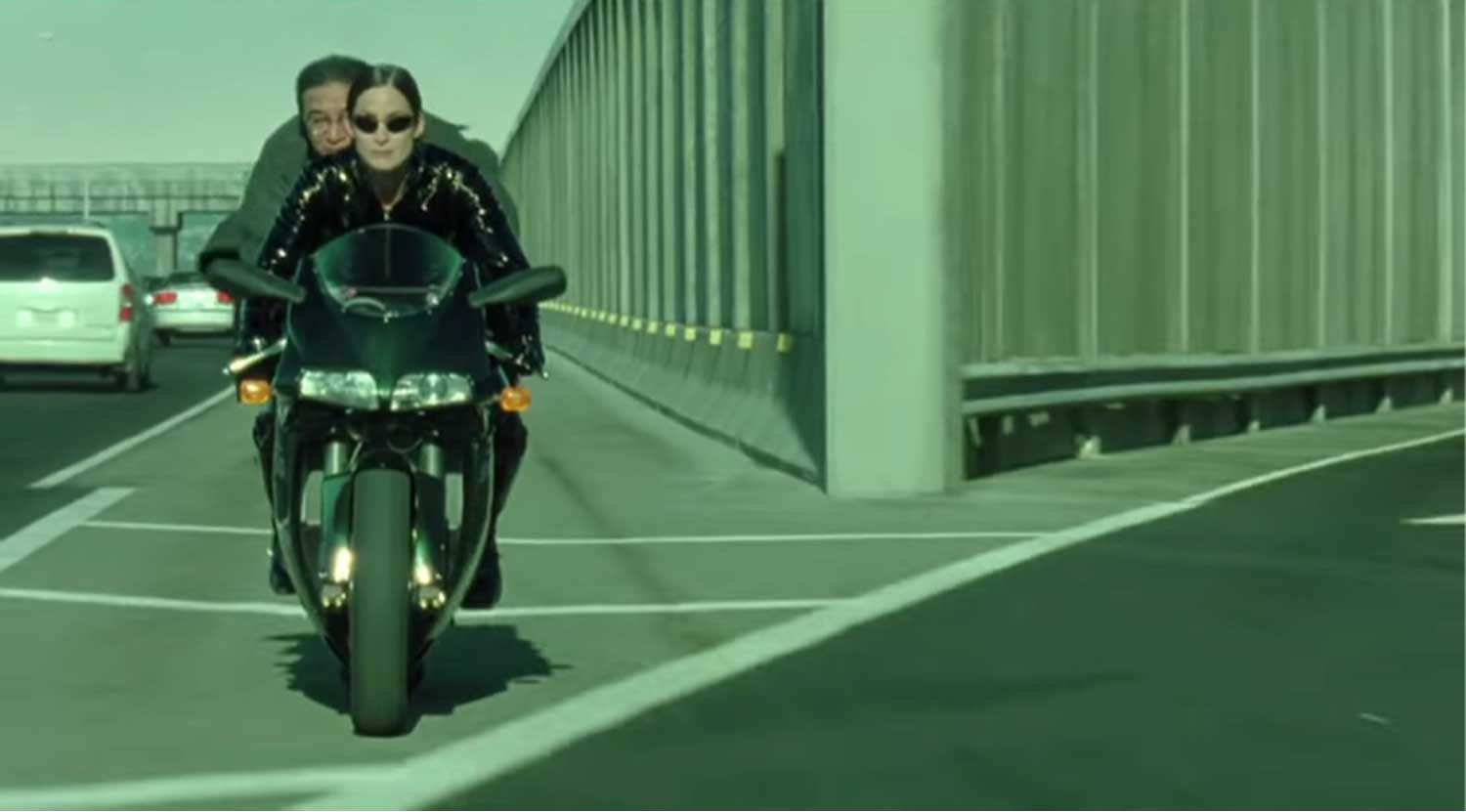 Our eponymous hero takes on the Joker astride his heavily-armed Bat Pod bike, tearing through the streets (and shopping malls) of Gotham City.

Expert view: “An even more extreme version of the Matrix scenario; the gap simply wasn’t big enough, evidenced by the fact that the cars all lost door mirrors or had other damage. Saying that, the bike is pretty impressive – can I have one?” 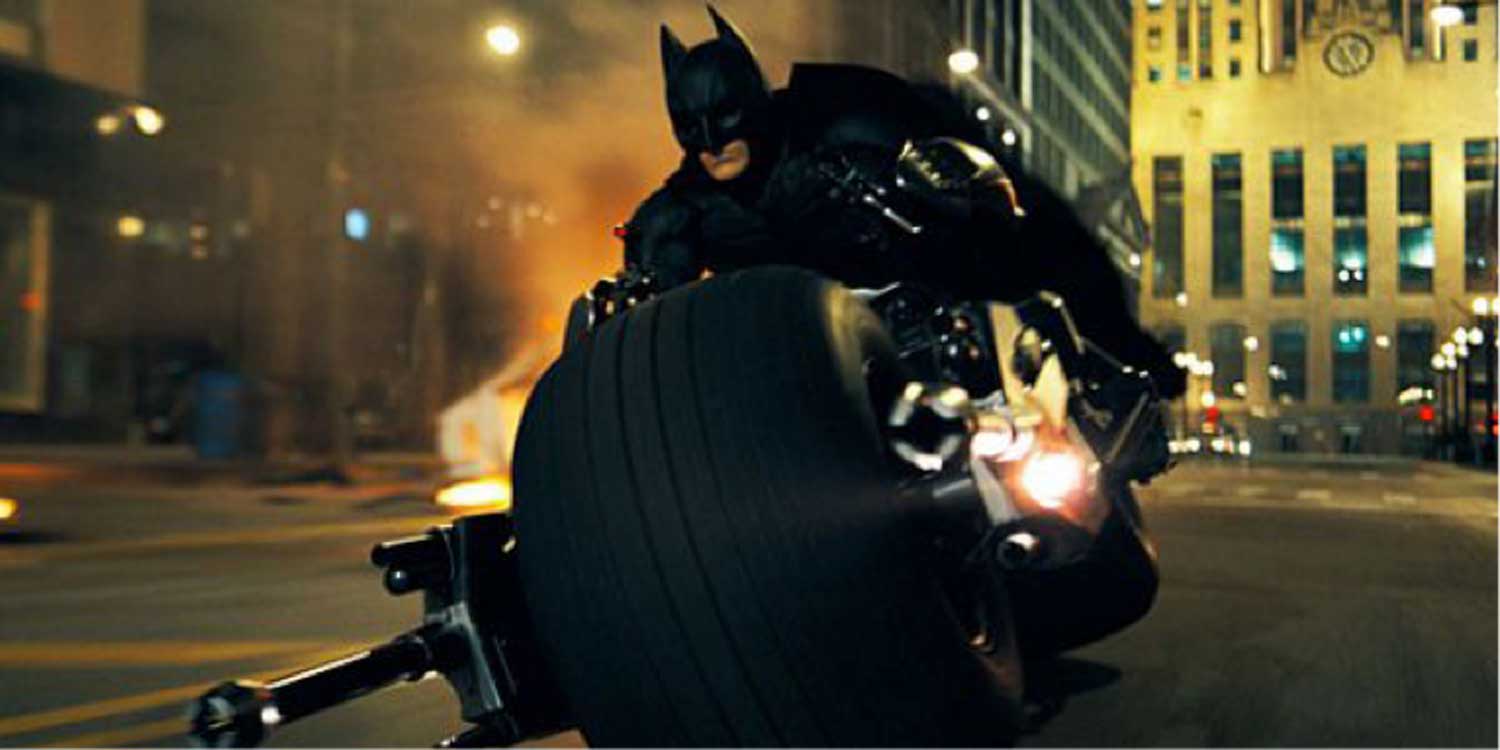 Indy and Sean Connery leave the Nazis trailing in their wake thanks to their trusty Dnepr MT-11 and a fortuitously positioned flagpole.

Expert view: “Riding any bike (particularly a road one) on a loose surface is pretty tricky. Better progress could have been made by positioning earlier for the bends, thereby increasing his view – this would have given him the chance of straight-lining at times, rather than treating each bend as a separate entity.”

There are more side-car shenanigans as the plasticine pals hunt down some mysterious sheep rustlers.

Expert view: “Be aware of traffic that is closing up from behind, as it will seriously compromise your ‘safety bubble’. If you feel at danger from another vehicle, find a place to pull over and let it pass; that way you are not pressurised into going faster than you are comfortable with.” 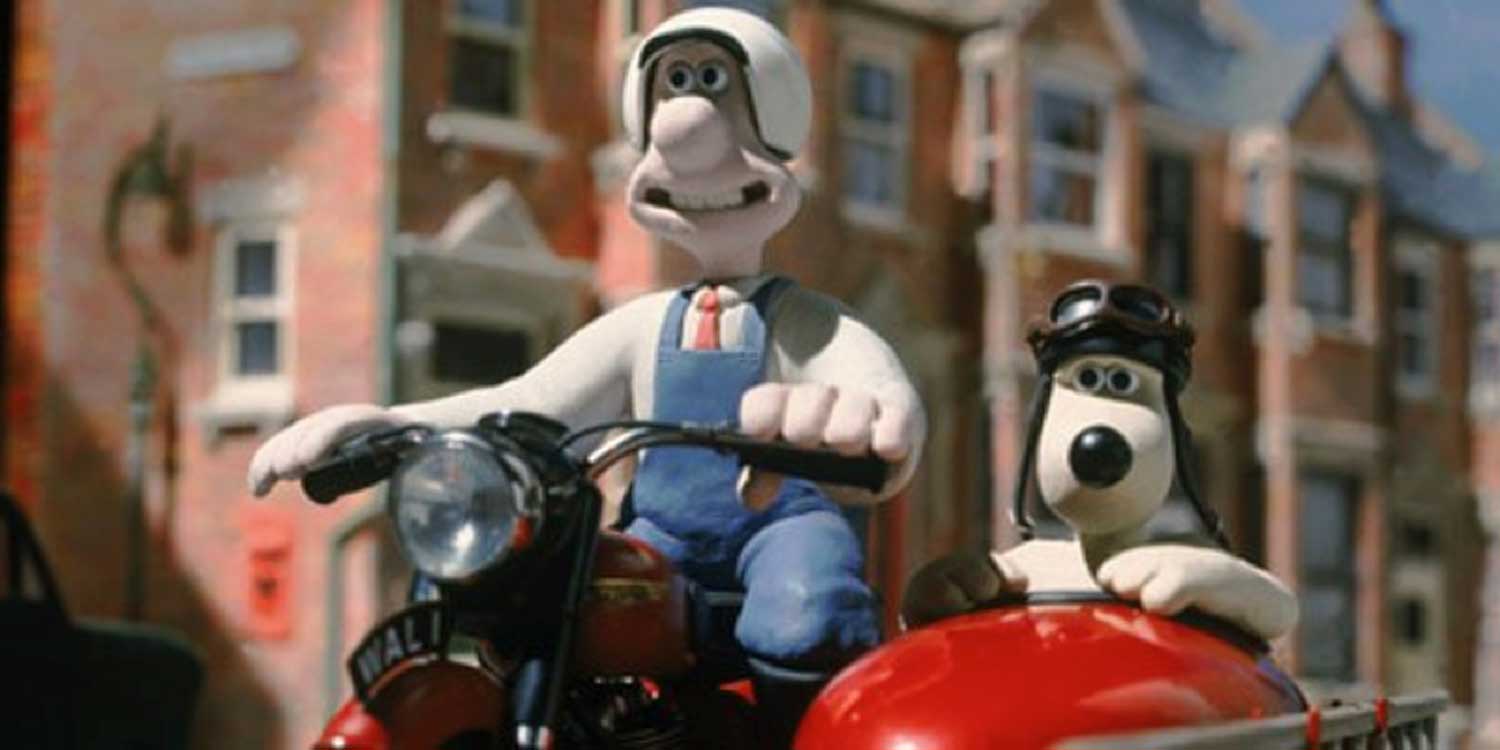 Tom Cruise and Cameron Diaz belt around dodging bullets on the back of an Aprilia SXV 550, which was modified for the film’s stunt scenes to look like a Ducati Hypermotard.

Expert view: “Too much swerving from side to side will increase the risk of skidding and completely losing control. As with Indy, look well ahead to pick out parts of the road where you can ride in as straight a line as you safely can, thereby maintaining your momentum as high as possible.”

What is it with movies and sidecars? In this clip, Harry fends off Death Eaters and Voldemort himself alongside Hagrid’s flying Triumph.

Expert view: “The main point from this clip is at the end, where they manage to land in water. Whenever you make any manoeuvre (for example an overtake), you need to make sure that you have identified a safe place to return to – it’s no good half-planning something as the end result is not guaranteed.”

Futuristic Light Cycle battling is the order of the day here. Things don’t seem to end too well for our neon-blue front-runner.

Expert view: “Don’t let your bike come into conflict with other vehicles, as there is a great possibility that you will come off worse in the event of a collision – keep as big a safety zone around you as possible. The rider failed to notice the green bike cross his path, his gaze was fixed ahead so intently that he failed to pick it up with his peripheral vision – this may have given him a chance to take avoiding action.”

Steve McQueen and his Triumph T60 lead the Nazis on a merry chase before being cruelly felled by a barbed wire fence.

Expert view: “Once he started to make his getaway he should have picked a road and stuck to it. By going off-road and constantly stopping and starting he lost too much time. In sticking to a more decent surface and applying the system, he could have made good progress and put a lot of distance between himself and his pursuers. Don’t know if he would have made it to safety, but this would give him the best chance.”

Our cyborg super-villain hunts down poor Sarah Connor with murder on his mind. In this clip, he blasts away with a machine-gun from his Honda CB750 Four K2 as the humans attempt escape in a bullet-riddled pickup.

Expert view: “A motorcycle has the edge over a car/van in respect of acceleration, but will suffer on bends/swerving, as four tyres give much more grip than two. Also, riding with one hand will limit his ability to change direction effectively by using positive steering. He could have caught the vehicle up by riding two-handed and looking further up the road (ahead of the van), in order to see the layout of the road and plan his ride accordingly, rather than reacting at the last minute to what was immediately ahead.” 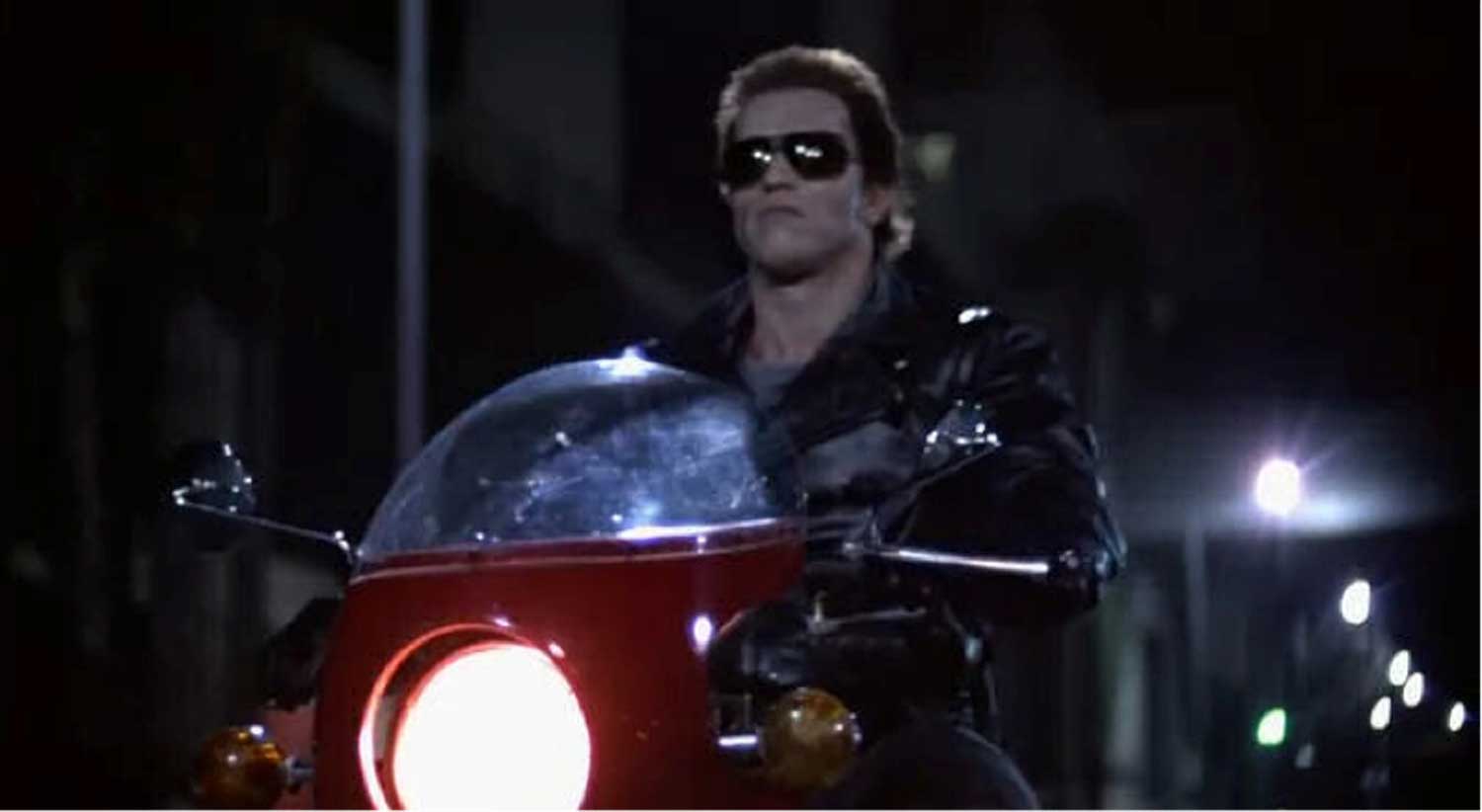 Ron is enjoying a delicious-but-filling burrito with his loyal friend Baxter, when Jack Black pulls up alongside him on a Yamaha chopper. The rest is history.

Expert view: “This is one of the basics of advanced riding: never put yourself in a position of potential danger. Anything could have been discarded out of the window (cigarette end etc) – also the driver could have lost control due to many factors e.g. a puncture, changing a CD, being distracted by passengers, especially children. You should be either in front of the vehicle where the driver can definitely see you, or positioned behind so that you are visible in their mirror. Thus both he – and Baxter the dog – would have come out of it a lot better!” 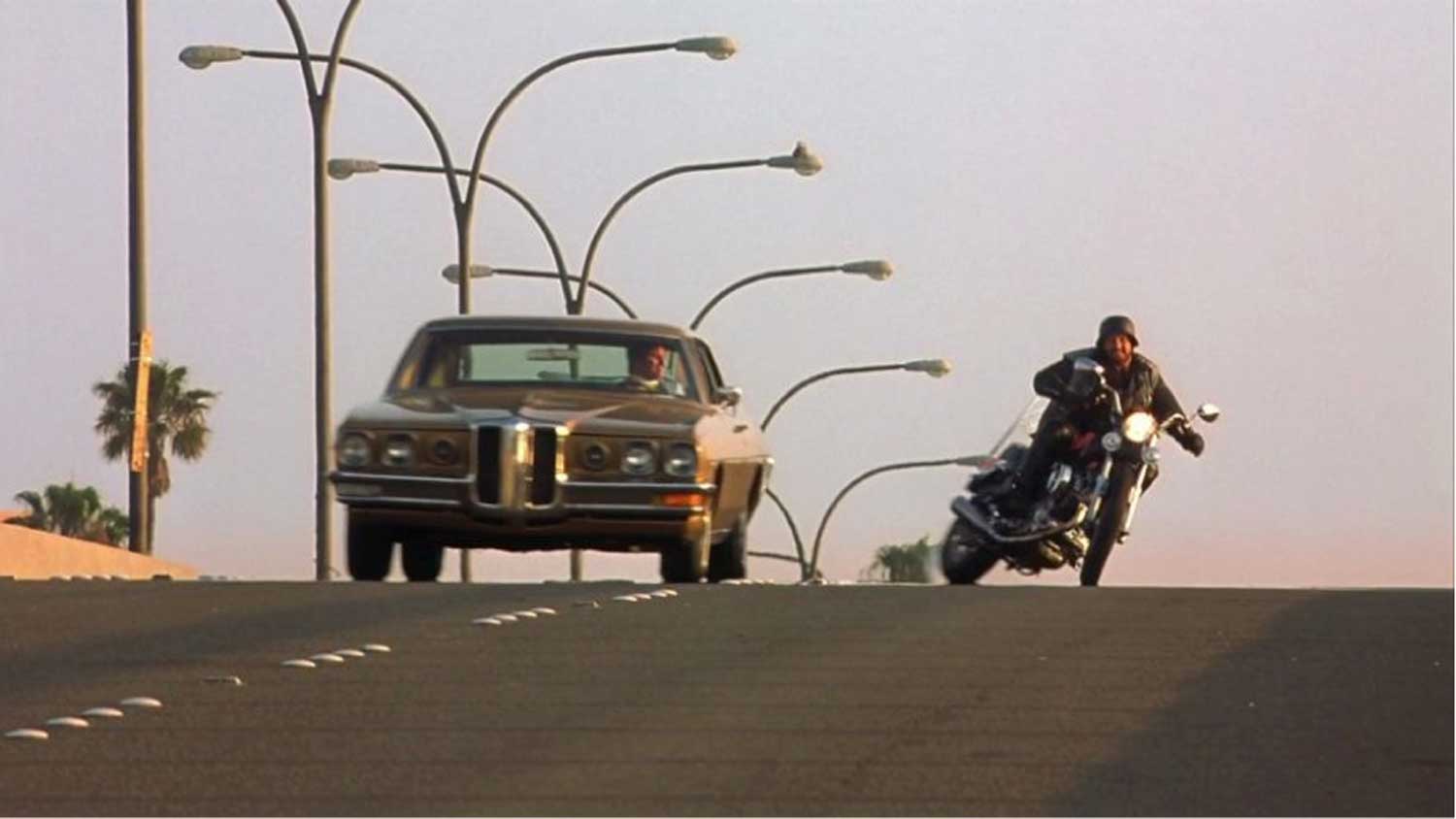 If you’re interested in a smoother, superior ride, visit the courses for bikers section of the Institute of Advanced Motorists website. Even great riders can improve: 97% of participants said the IAM advanced test increased their enjoyment from riding.