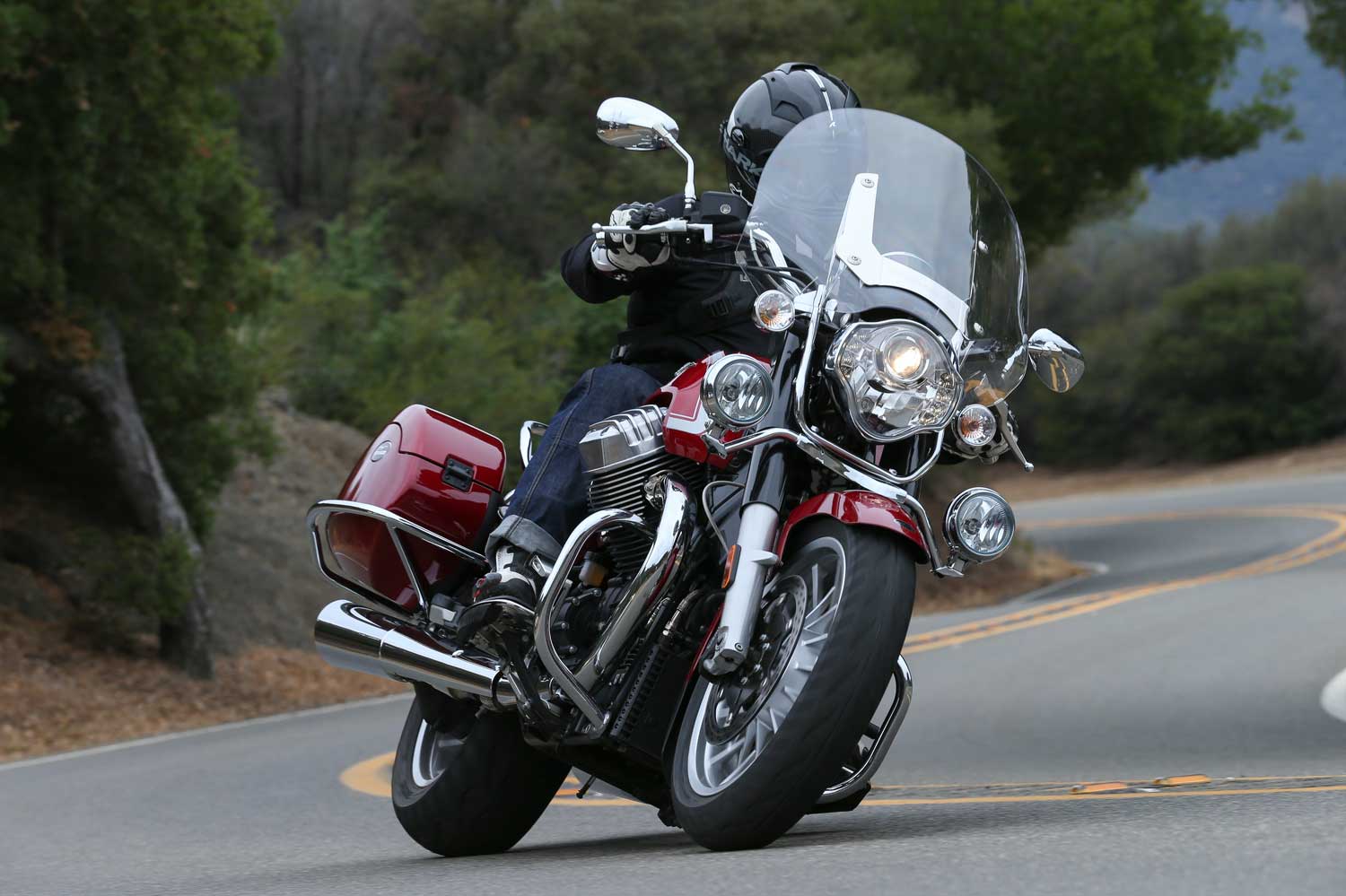 This is a joy of a motorcycle. One of the best engines and chassis around make it as rewarding to ride as it is pretty to look at (and that’s a lot). The bike’s basically unchanged from the previous model, and two new red and blue colour schemes are for the States only, but that’s fine by me when the package is this good… 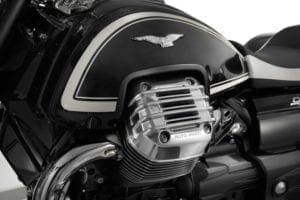 The 1380cc, 90º V-twin apes the original Cali. It’s the largest engine in Moto Guzzi history, belching out more than 88.5lb-ft of torque at a measly 2750rpm. The 104mm pistons are mated to four valves per cylinder, a single overhead camshaft with rocker arms and roller tappets. There’s a 52mm single throttle ride-by-wire system, with bi-jet injectors to ensure the right mix of fuels gets to the engine as and when needed.

Final drive is via a shaft with double flexible coupling after a new single clutch with reduced load. The six-speed ‘box runs top gear as an overdrive for comfortable cruising. 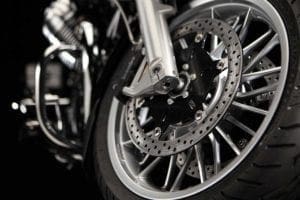 The double cradle steel frame has a purposefully low centre of gravity, with a 1685mm wheelbase, 32° of rake and 155mm of trail. Seat height is 740mm, though 720mm is available as an option.

The 46mm forks have no adjustment, but the rear shock is adjustable for preload. The bikes get dual-channel ABS on the Brembo brakes (radial calipers up front on 320mm discs), which work well enough but don’t have the initial bite you might expect, the ABS is switchable and works very well.

Should I buy one 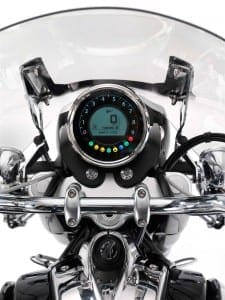 The Touring bike I rode has the neat touches that were seen in the production drawings for the 2014/15 Cali: A funky pillion grabrail; 1950s motorway cop fairing and lights as well as the sweptback panniers. It’s a machine to be seen on, but that doesn’t mean it’s simply for over function.

The Cali offers long, confident lean in corners . According to Guzzi it’s five degrees more than a Harley-Davidson, and the bike comes with its own sliders mounted under the footboards. You’ll work your way through them pretty quickly though, as it’s just so much fun getting the big girl over a long way.

The Cali also gets Traction Control with three settings: Touring, Fast and Rain. Accessed via the left handlebar switchgear the difference between the three is immediately obvious, and although Touring is fine for 99% of what you’d do on this type of machine, it’s well worth sticking it in Fast (or Veloce as says on the screen) every now and then just to impress yourself with a healthy dose of Italian ooomph.

The Cali is wonderfully engaging to ride, with none of the bothersome vibration you might expect. That’s not to say that this is a homogenised, sanitised, smoothed-out new Guzzi – oh no. What we have here is a great use of something called an ‘elasto-kinematic engine mount’. Basically the motor is joined to the frame by flexible mounts that can be tuned by the factory. 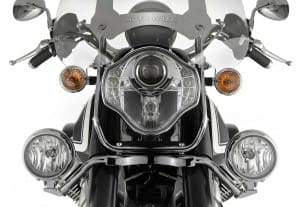 What that means in real life is that when you’re on the move the bike is smooth and almost vibe-free, but stop at a junction and there’s the familiar Guzzi throb with the bike lazily rocking from side-to-side underneath you. The system works brilliantly. This then is real dial-in character that gives you the best bits without the numb hands (or numb bum) you used to get with the bikes from Mandello.

The Cali is a cracking place to be to cover miles as it’s perfectly easy to stick the bike in one gear and roll on and off the power as you need to. It’s also wonderfully manoeuvrable at slow speeds and city-speed too. Even though the fully-dressed and loaded up California tips the scales at a mighty 337kg.

So the seat is good, the riding position excellent, the chassis and motor superb and the tech as rewarding and useful to use as you’ll find on anything Japanese or British. It’s easy to plod along or really motor if the mood takes you, and it’s more refined than most machines in its class. When was the last time anyone said that about a Guzzi? 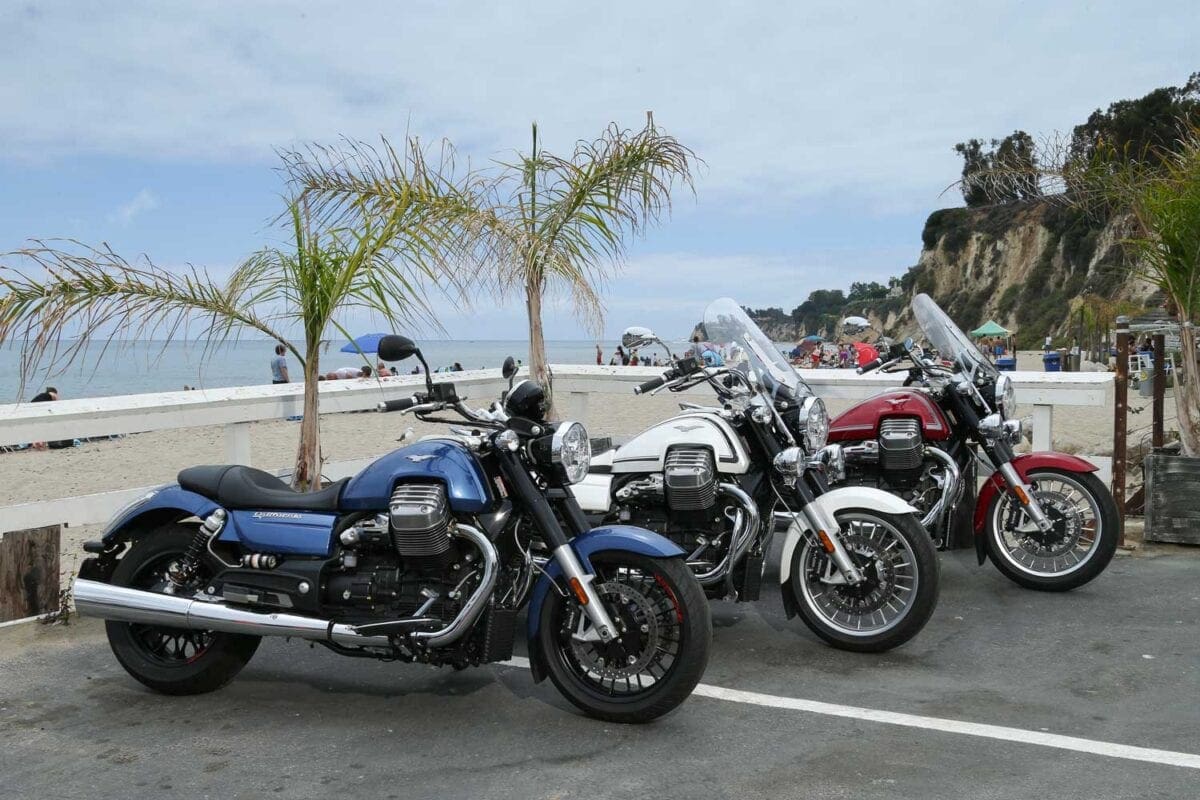