Ride the UK’s best roads and see a great show! 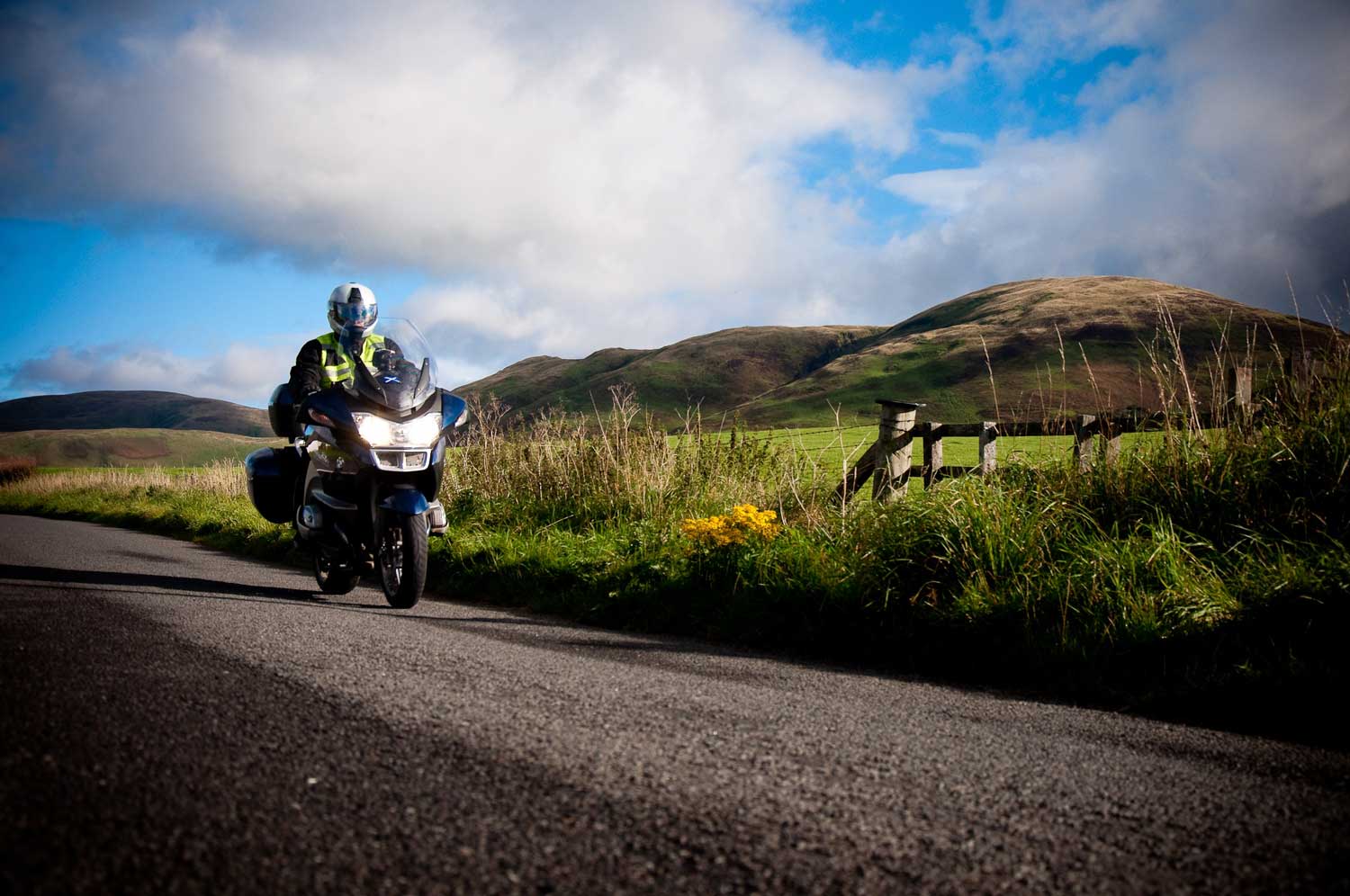 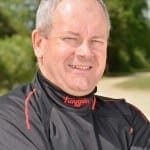 The Carole Nash Great Scottish Bike show in Edinburgh on the 9th & 10th August promises to be the North’s best event… Chris Moss has three great rides to do while you’re there.

Going to the biking celebration north of the border will give you a chance to see and enjoy plenty, with an huge selection of dealers, manufacturers and traders showing off their wares. And with the chance of meeting racing stars Giacomo Agsotini and Alex George, leaving home for the event is easy to justify.

Cracking though the extravaganza will undoubtedly be, there’s something else you can do… ride there and have a look around one of the very best countries for bikes. I’m regularly amazed by the number of riders who tell me they’ve never sampled two-wheeled life north of the border. And I say to them what I’ll say to you now – just get on your bike and go there!

Scotland is an absolutely superb place to ride, with many outstanding virtues making it attractive enough to consider before a lot of European regions. The vast majority of riders usually head for the Highlands – an utterly fantastic part of Scotland and a zone easy to warrant travelling to. But for the purpose of visiting the show, it’s just a little too far to be chosen as a riding add-on. However there is a solution, and it’s sited just to the south west of Edinburgh – the Scottish Lowlands. It’s a captivating area with many elevated routes that are not at all ‘Low’. It’s one of biking’s best kept secrets with even quieter roads than the Highlands, especially at this time of the year. There are far more facilities, including petrol stations, and it’s all a bit closer too!

A great way to start the investigative proceedings would be to book one or more overnight stays at the unique Buccleuch Arms Hotel (www.buccleucharmshotel.com/biker-friendly/). Based in Moffat, in Dumfries and Galloway, it’s been described as Britain’s most bike-friendly hotel. Now that’s one bold boast. But as it’s run by passionate bikers, serves award-winning food, wines and whiskies, has purpose-built bike garages, can give advice on numerous selected biking routes, and offers discounts for riders, that’s a claim that’s very hard to argue with. Several trusted journos I know have sampled the hotel and spoken very highly of it.

Just off the A74(M), 30 miles into Scotland, it sets you up perfectly for a run into the show, just 55 miles distant. However, heading straight for Edinburgh would be criminal, and with such superb roads and scenery situated nearby you’re better off taking the long way round….

Dave Smith, director of the Buccleuch, is a hugely enthusiastic biker and can give exact guidance on routes near his hotel. He can tailor journeys to suit your exact tastes, and even provide an accurate weather forecast to help you adjust your headings to stay dry!

He’s as much of a bike tourism expert as he is a hotelier, and everything he and his websites www.motorcyclescotland.com and www.motogoloco.com advise and recommend has been personally vetted by the R1200RT owner. We spoke to him about three routes he feels would suit show-goers. Enjoy the show, and enjoy the riding! 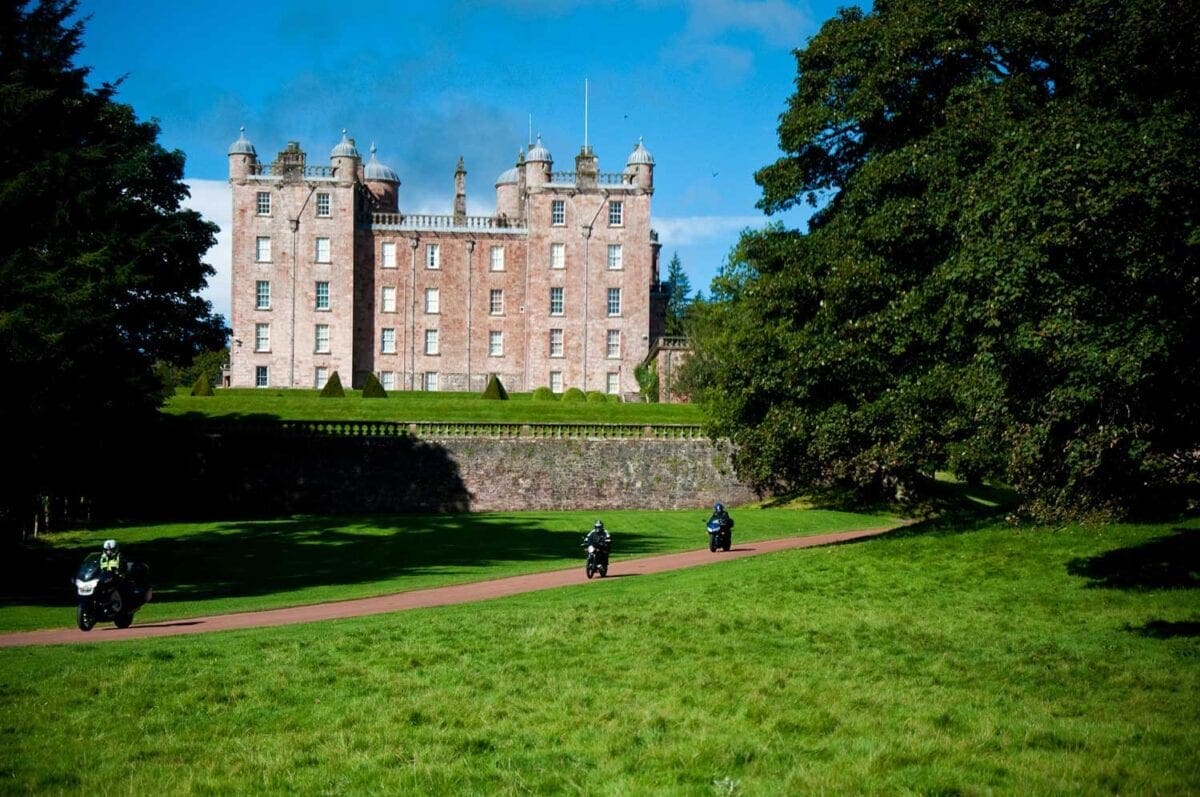 Leave Moffat and head north on the A701, then turn left on the B719 to cross the A74(M). You’ll then meet and turn right onto the former main road to Glasgow, the B7076, which flows quickly and freely as it runs parallel to the A74(M). The quiet route boasts good views of hills and forests on either side. At the T junction with the A702, turn left and be prepared for a dream route over the spectacular Dalveen Pass. The fantastic riding road is very tight and twisty, climbing up into and through the mountains and delivering spectacular vistas before dropping down to meet the A76. Before you get there though, you’re advised to visit the majestic 17th century Drumlanrig Castle. Touring its grounds is free, and guided tours cost £10 per adult.

Rejoin the A76 and ride south along it for just one mile before turning right back onto the A702. It’s another heavenly, car-free route of a challenging nature that’s quite narrow but very well-surfaced. After joining the A713 at St. John’s Town of Dalry head south to run along the east side of Loch Ken. The route continues along a beautiful valley with idyllic views on each side. Once you’ve reached the A75 turn left, then around 4 miles later turn right on the B794 to Dalbeattie.

From there the A710 road winds nicely thought the pretty coastal and forested scenery past the dramatic ruins of Sweetheart Abbey, a 13th century monastery which makes for an excellent photo opportunity. Continue to Dumfries, which can be easily by-passed using the A75 which serves as a ring road to join the A701. This route forms the final free-flowing journey back to Moffat. 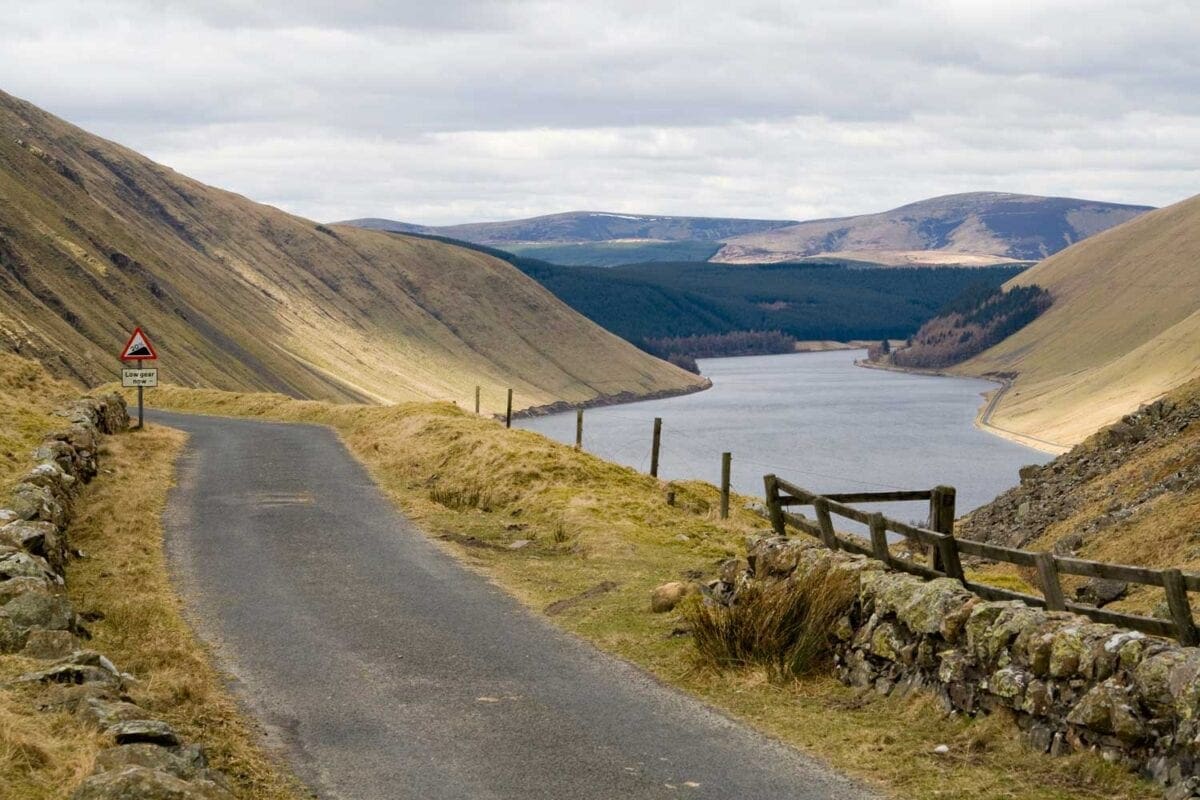 Leave Moffat and head north on the A701, which begins to twist and undulate shortly after leaving the town. Pleasing views of hills, forests and rivers (including the source of the famous Tweed) distinguish the route. After 19 miles, turn right at Tweedsmuir onto a deserted single track road and ride alongside the Talla reservoir. Running in a deep valley the route is flanked by mountains which provide enough wind shelter for the reservoir to resemble a millpond most of the time. Seeing cars here is very rare, though sheep tend to stroll onto the road so take care.

At the end of the water the road crosses the dam and climbs very steeply. At its summit there’s a great opportunity to take pictures of breath-taking views of the mountains and reservoir below. They’ll serve as a reminder of your trip and something to counter the questionable ‘Lowlands’ label the area has. From this point the road heads towards the Megget reservoir and becomes more challenging with its sharp hairpin turns and sudden elevation changes. It makes for very satisfying riding, but it’s worth slowing down and taking care to enjoy to the full.

When you arrive at the T-junction with the A708 turn right to run along St. Mary’s Loch. It’s a good time to take a break at the Glen Cafe sited halfway along the shore of the water. The bike-friendly proprietor Kath loves to chat about bikes and can refresh you with food and drink as you absorb the Loch’s beautiful surrounding views. Once fortified the road back to Moffat finishes the short loop pleasurably with fine images each side of the winding and undulating carriageway. It’s a fantastic riding road that’s not too intense, allowing you to enjoy all it has. 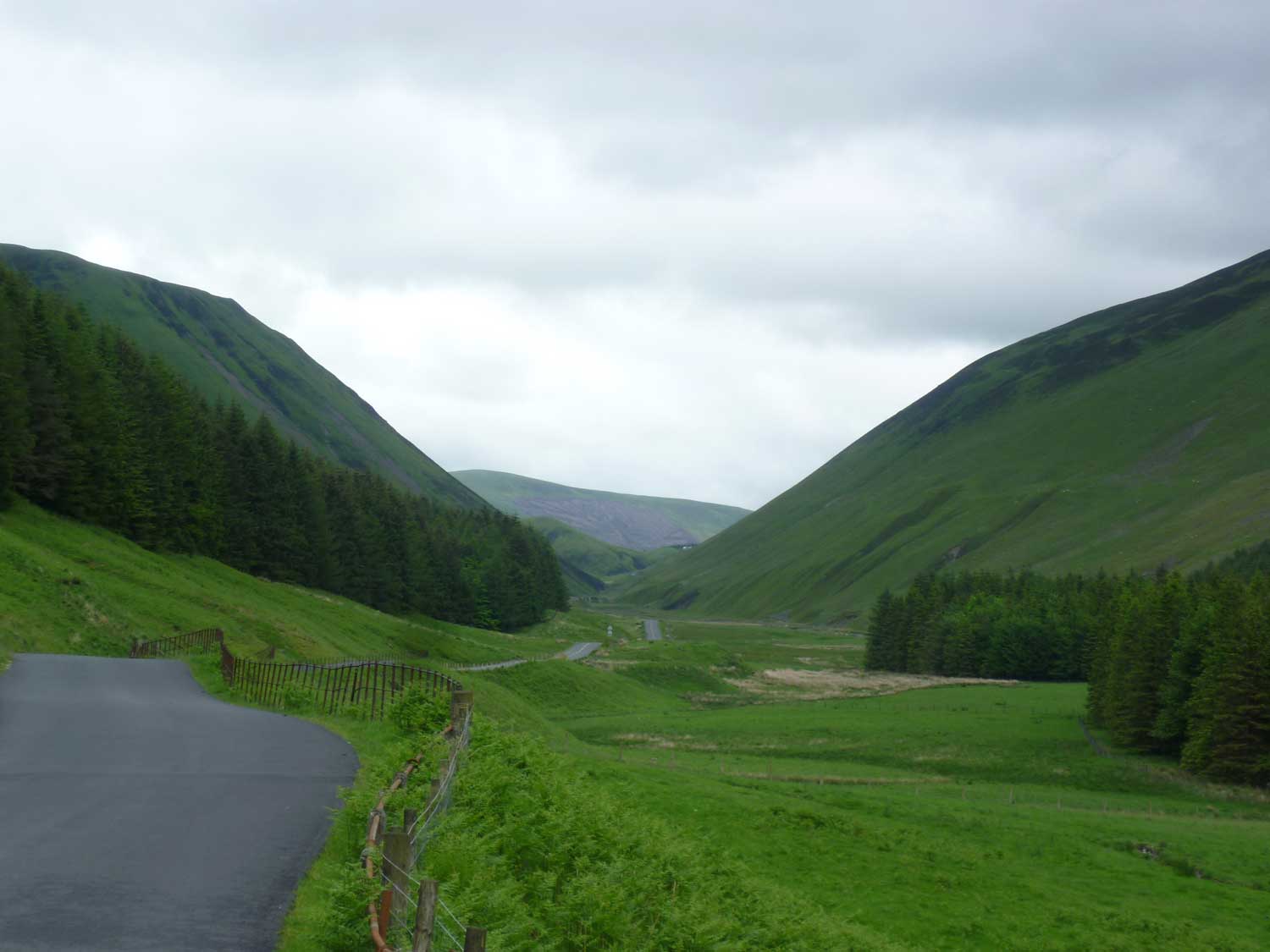 Head south on the A701 from Moffat past Beattock and then join the free-flowing, well-surfaced B7076 which runs parallel to the A74(M). It’s a flat route that’s easy to make good progress along and features pretty pastureland and forestry along its borders. At Lockerbie, turn left onto the B7068. The deserted route soon becomes a heaven-sent gift to motorcycling with fantastic sinuous roads and superb views enjoyed by all who use it. Its scenic thrills continue along to Langholm where you meet the A7. Turning north to the Borders towards Hawick needs care. The road itself is safe, but its speed sometimes leads to police attention, occasionally in unmarked cars. Dave has a good relationship with the police thanks to requesting his guests respect limits, especially 30s through villages. You have to be riding pretty irresponsibly to get a ticket. The A7 rolls gently up and down along the hilly landscape enhanced by attractive views of forests and fields. It’s a great route to relax and enjoy. Hawick has a bike museum which pays tribute to two of its own bike race champions Jimmy Guthrie and Steve Hislop. Then after Selkirk you join the ‘gem road’ of the area, the A708 and head back to Moffat.