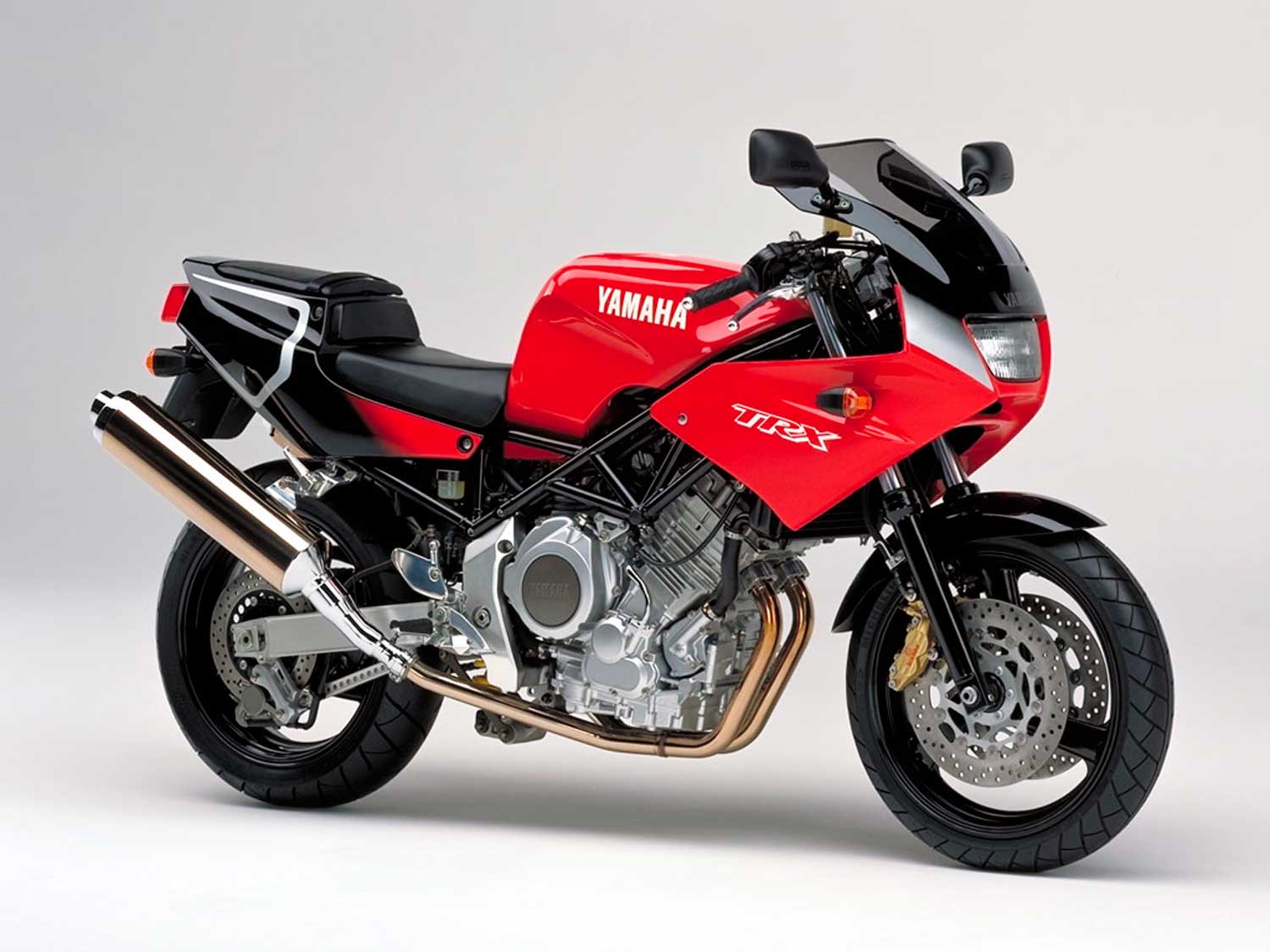 When it comes to taking the left-field approach to motorcycle design, no one does it better than Yamaha. Their mind-set is noticeably different to that of the competitions’ and they are often cited as being the most European in the way they do things. Nothing better typifies this than this month’s subject matter; the quirky Yamaha TRX850.

The TRX’s lineage is a little perverse, running as it does from über trail bike, through super-commuter, to V-twin aping sports machine. With the big four-stroke twin dead and buried, Yamaha aunched the XTZ750 Super Tenere back in 1989 with 750cc, 5 valves per pot and water cooling. This was a radical departure from the norm, but the bike proved its worth by winning the Paris-Dakar rally in various guises. With a quick capacity increase and a rather subtly urbane makeover, the bike became the TDM850; the antitheses of four-cylinder race-replicas. Of course, it was really only a matter of time before some bright spark in Iwata (the home of Yamaha) decided to sex-up this plain-Jane twin and deliver a sports machine. Being Yamaha, the powers-that-be couldn’t resist a little tweaking and just had to add that special creative flair. The previous 360 degree crank was deemed inappropriate for the new bike, and was reconfigured at 270 degrees. This apparently wacky idea was actually rather clever in that it gave the engine the firing characteristics and feel of a V-twin (a trick still used in modern bikes). Perhaps it’s no real surprise then that the early Japanese market versions of the TRX850 were sold in a reminiscent Romanesque red that was counterpointed by a white steel trellis frame…Ducati plagiarism anyone?

Feted at its launch as an inspired alternative, the TRX outperformed its older brother by eleven ponies and seemed set for minor stardom. Sadly, however, Yamaha’s pricing policy pitched the bike into exactly the same market segment as the sports 600s, and in the UK at least, cylinder-count generally out-trumps capacity. The TRX850 remained on sale until the new millennium when it was quietly dropped, but has always attracted a small, loyal band of followers. Very much the thinking man’s sports bike, the slightly odd-ball twin is beginning to reach minor cult status and for good reason: with a little bit of work it’s possible to see a genuine one hundred bhp hitting the tarmac. Forums and devotees can steer would-be owners towards cheap, readily available brake revisions, performance enhancing exhausts, standard Yamaha-sourced suspension upgrades and a whole raft of tweaks, dodges and wrinkles that really improve what is already a very capable machine. I’ve ridden a production racing version of the Yamaha destined for the BEARs (British, European, American Racing) series – the power delivery of a tweaked TRX is seductively beguiling and worryingly deceptive.

The slightly loping nature of the engine, the induction noise and off-beat exhaust note all conspire to lull you into a false sense of security… until you look at the speedo. Supremely illegal speeds are very swiftly reached yet you may genuinely wonder how you got there. The crank is the reason, and there’s a fascinating link to a legendary designer. Australian Phil Irving of Vincent fame postulated the unconventional layout in the 1950s, and his compatriots started to rephase Yamaha XS650 cranks two decades later to deliver a unique big twin. Makes you wonder where Yamaha got the idea from…

ITALS> For anyone wanting to get a flavour of what the VJMC is all about, you couldn’t do much better than roll up to our auto jumble on April 6th at Popham airfield in Hampshire at 8am. With an array of hard to find parts and classic Japanese iron for sale, the event has become the opener to another busy classic season. Situated just of the M3/A303 intersection (satnav SO21 3BD), access is simple with free parking and onsite facilities.

If you are new to the slightly disturbing world of Japanese classics, the organisers will be more than happy to give you some general guidance and advice. If there’s one thing the club does well it has to be sharing its knowledge. Simply by attending the event you’ll absorb some of the two wheeled history that’s there. The worrying thing is that you’ll almost certainly experience a strange and inexplicable desire to own something much older than your current machine. But don’t worry; it’s all part of the process. Many of our members never knew they needed an older bike in their lives either until they attended one of our events!