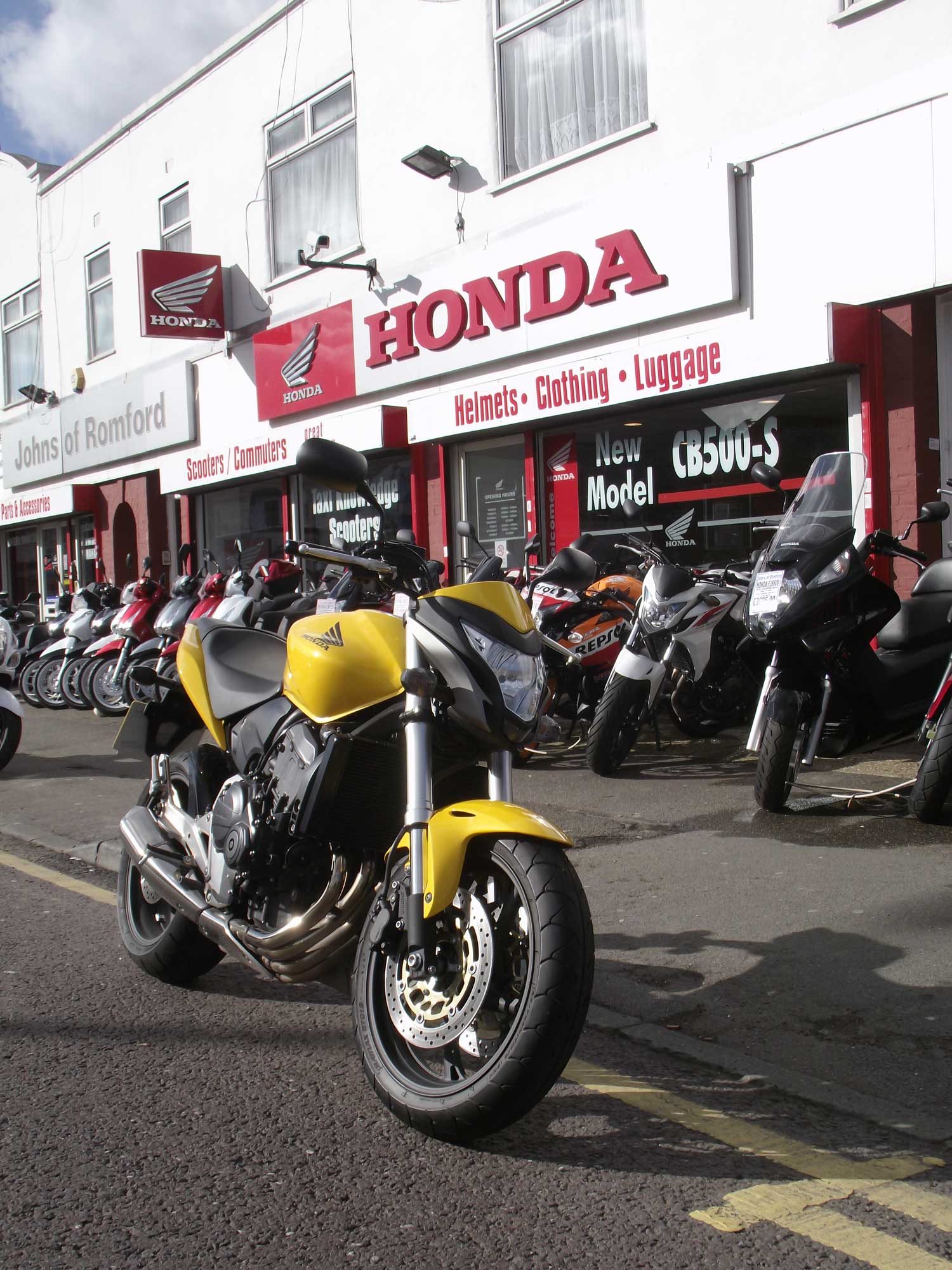 The Honda CB600F Hornet came into existence as a rival for Suzuki’s spectacularly successful Bandit and Yamaha’s original Fazer.  The current model dates from 2007, when it had a total revamp. The model we tested is the final iteration – 2014 sees the Hornet replaced by the CBF650F.

Give me some spec…

The engine is donated from the CBR600RR; in its original state of tune it’s flexible (in sportsbike terms), but has been detuned for a naked bike, and to provide additional torque (47lb-ft) lower down in the range – useful for a bike intended for more general use.

Holding this motor in place is an aluminium backbone chassis, sitting on top of admittedly basic suspension (preload only adjustment). Braking is supplied courtesy of 2x296mm front discs with twin piston calliper and 240mm rear disc.  ABS is an optional extra.  At 173kg dry weight it’s no porker.

The riding position came as something of a surprise for a general-purpose midrange motorcycle. It’s quite sporty, with the pegs in more of a rear-set position. You find yourself wrapped around the tank; it’s possible to move further back when pushing on, but when first planting yourself on the bike it slides you up against the tank.

The bars are narrow, helping with the wraparound riding position, which gave me a problem. I’m quite broad shouldered, so trying to tuck into the bars I found the side of my hands catching the edge of the grips, but it’s genuinely comfortable – I got off the bike at the end of the ride feeling fresh.

Pick up the pace and the engine really keeps on giving, driving hard from low down (once you’re in 3rd and up: 2nd is best for inner-town meandering, leaving the higher gears for cracking on above 40/50mph).

It’s quick to tip into the bends, but holds the line nicely: the budget suspension coped well with everything I threw at it (even the poorly surfaced inner-city commuter stuff and a single-lane back road I accidentally took myself down). Wind protection is minimal, but was comfortable up to motorway speeds.

If a novice rider was looking at this bike, I would recommend the ABS option. The stock brakes have little lever travel, so come on quite hard, but once you’re used to applying an even squeeze they pull up the Hornet nicely.

What nick is it in?

As you would imagine from a bike with only 430 miles on the clock (post test-ride), it’s pristine.

Should I buy it?

The dealer wants £5,499 for a late 2012/early 2013 (62 plate) bike with just 430 miles on the clock in mint condition. A search of other bikes in the local area of a similar age and mileage revealed a couple for sale within a Tenner of this, so it looks about right.

Consider this: New, the bike would have been £6,455 – so it’s a £955 reduction on a bike not even fully run-in. If you need an all-rounder that has more sporty aspirations, then this is worth looking at.

With thanks to John’s of Romford for the loan of the bike: