The FIM MotoGP World Championship returns to Silverstone this weekend (28-31 August) for the Hertz British Grand Prix. Five Brits – Bradley Smith, Cal Crutchlow, Scott Redding, Michael Laverty and Leon Camier – will line up on the starting grid alongside legends of the sport including Marc Márquez, Jorge Lorenzo and Valentino Rossi, who will all be pushing for maximum points in front of the passionate Silverstone crowd.

As well as the on track action, which includes MotoGP and the highly-competitive Moto2 and Moto3 classes, Silverstone has lined-up a packed schedule of entertainment for the whole family, throughout the weekend.

Off track activities officially start on Thursday (28 August), with the popular Day of Champions – the annual fundraising event organised by Riders for Health – centred around the main stage. The day features interviews with the stars of MotoGP, Moto2 and Moto3 by BT Sport presenter Julian Ryder, plus the popular ‘A Question of Bikes’ Quiz hosted by Matt Roberts. There will also be the famous MotoGP™ Auction, which raised over £77,000 in 2013 to support the charity’s life-saving work in Africa.

Plenty of live music and entertainment is scheduled throughout the four days, on the purpose-built concert stage in the Luffield Complex area. DJ Marvin Humes will get the party started on Friday night and the post-Qualifying Grand Prix Party will be held on Saturday, where there will be appearances from all 24 MotoGP riders, who will be interviewed on stage by Julian Ryder and former Eurosport commentator Toby Moody from 4:45pm. To top off the evening, fans will be treated to a performance from ‘Toseland’ – the band fronted by double World Superbike Champion, James Toseland.

As well as entertainment on the main stage, fans of all ages can enjoy a wide range of interactive riding experiences and ‘first-time’ taster sessions. The line-up of free entertainment at this weekend’s British Grand Prix includes: 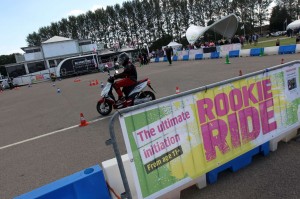 Nine giant screens plus 24-hour commentary and interviews on Silverstone Radio (87.7 FM) will keep fans up to speed with all the on and off track action and events taking place over the weekend.

Tickets for the 2014 Hertz MotoGP™ British Grand Prix are available at advance prices until 12:00 noon on Wednesday 27 August, via www.silverstone.co.uk or the Silverstone Call Centre on 0844 3750 500. After this time, tickets will be available ‘on the gate’.