BSB: No spectators at Donington Park and Snetterton in August

British Superbikes Championship organisers have just confirmed that it won’t be allowing spectators at the Donington Park and Snetterton rounds next month. 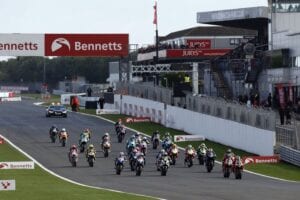 BSB’s hand has been forced following the government’s decision to postpone further test events with spectators at ‘Elite Sport’ fixtures. Following further consultation with the Department for Digital, Culture, Media & Sport it’s been confirmed that fans won’t be able to attend any of the British Superbike Championship rounds throughout August. That’s Donington Park on 7-9 August and Snetterton on 21-23 August.

UPDATE 31/7: For anyone planning to attend a @bennetts_bike BSB event this summer, MSV has just issued an updated statement here:https://t.co/hlh3b6A2Bp pic.twitter.com/Lx4TRCPNdP

At this stage, it’s asking customers to not get in touch regarding their tickets. It’s intending to email all affected punters by email – explaining what’s happened and offering information on how to claim a full refund.