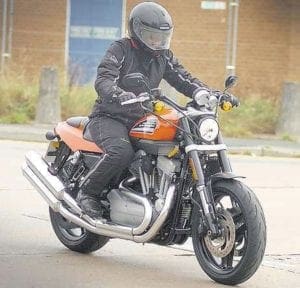 What exactly is it?
That’s not an altogether easy question to answer. Though based on the 1200 Sportster it owes much of its inspiration to the XR750 dirt tracker and, as such is a lot easier to handle than many other cruisers I’ve ridden. It’s probably one of the best all-rounders in the Harley stable.

What type of engine has it got? 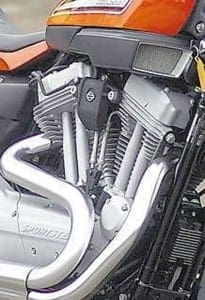 The XR1200 is powered by a 1200cc EvolutionV-twin engine with a 10:1 compression ratio, performance cams, downdraft fuel injection and oil-cooled heads. It yields 90bhp and 74ft-lb of torque.

What’s it for then?
This is the bike that may convince a lot of British sports bike riders that riding a Harley can be a lot more fun than they ever thought possible.

What’s it like to ride?
Surprisingly good. Turn the key, experience that unmistakable Harley growl, clunk into first gear and off you go.

Though there’s plenty of vibration from the isolation mounted V-twin it never becomes uncomfortable and a three hour ride was completed without complaint, aches or pains of any kind.

The riding position may be an anathema to most cruiser devotees, with its rearward facing pegs and handlebars that are relatively low, but in fact the XR1200 is one of the comfiest Harleys I’ve ridden.

What did you like best?
I loved the bright orange paintjob – it had a real retro look. I was also pretty enamoured of the upswept straight shot exhaust in satin chrome. The XR1200 is a really terrific looking bike.

What impressed me the most though is how responsive the brakes are – not your usual Harley-Davidson experience at all.

What didn’t you like about it?
Not a lot really. Harley claim the ergonomics for this bike were designed around an average height European male rider. Our mythical man may not be a lot taller than me but he’s probably got a bit more muscle. The XR1200 weighs 250kg and, as such, I found difficulty in paddling the bike backwards from anything other than a slight incline.

The XR1200 attracted so many admirers though that there was always someone nearby to give me a push when necessary.

The kickstand is tricky to engage. The first few times I used it I sat there like an idiot trying to flip it into place but my reach just wasn’t long enough. I eventually got the hang of it but still had difficulty each time I parked up.

I also found the gears a bit tall, especially between first and second and found myself in neutral more times than I liked.

Would you honestly buy one?
Well, all motorcyclists have their fantasy garage stocked with myriad bikes. Though I wouldn’t like one as my only bike I’d be more than happy to give it garage room so I could bring it out on a summer Sunday and go for a blast around the Dales.

What’s the most interesting Thing about it?
I reckon it’s the fact that it will corner. With a lean angle of 40 degrees (39 degrees to the right due to the pipes) it’s never going to rival the knee down sports bike but it would surprise a lot of Harley detractors who claim (probably without ever having ridden one) that all Harleys will only go in a straight line along an American highway.

Tell me something I don’t know about it.
The XR1200 was developed for the European market and only introduced into the USA when demand became so high they couldn’t ignore it.