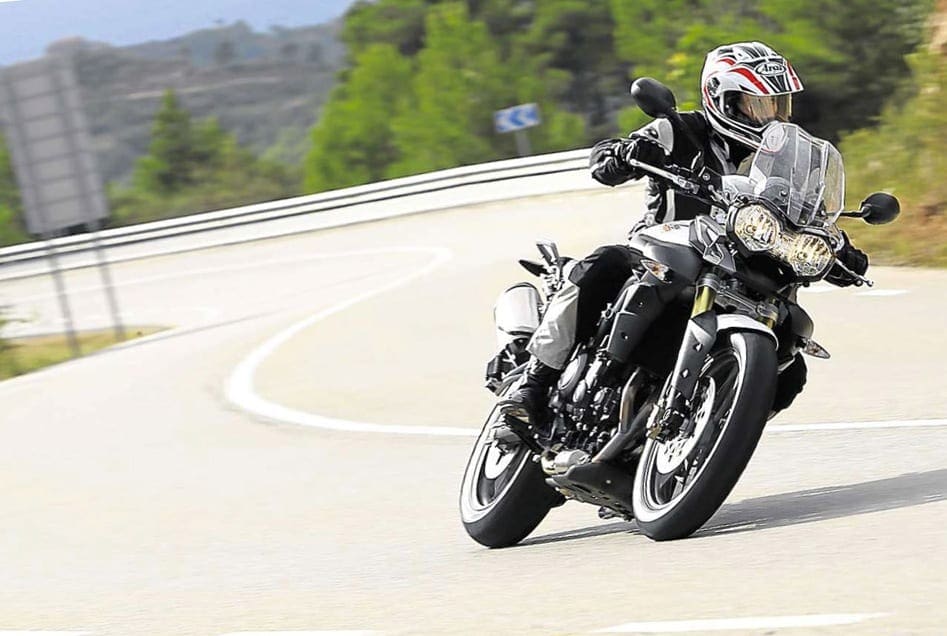 Eight hundred seems to be the magic number amongst bike manufacturers nowadays. With pretty much everyone producing a middleweight machine that is claimed to do everything bar make the tea, just how many of this currentwave of mid-capacity, do-itall bikes are real all-rounders? Is it even fair to ask so much from an individual machine? Triumph have answered that by deciding to produce two 800cc adventure middleweights: one a road bike and the other, their first ever machine designed with apparently genuine off-road ability. Let’s see if they’ve got it right… 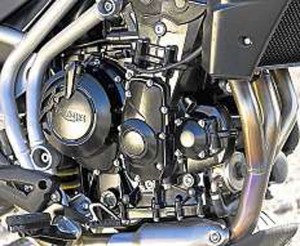 What’s new?
Three-and-a-half-years in the making, the new Tiger 800 was recently launched in theMontserrat mountains near Barcelona. The Hinckley factory’s latest offering is new from the ground up and, the more you study it, the more you see how much effort has gone into the construction. Triumph are renowned for fantastic handling machines, but as their Global Product Manager Simon Warburton admits, they had to learn a thing or two with the development of the allnew steel frame: “A lot of the guys at Triumph have an off-road background, but we’ve never produced a bike of this nature before. We know very well what works on the road, but we had to learn a little bit about the extra stresses and strains that are put on a bike when it’s ridden in an off-road environment. Naturally, the chassis has to be a lot stronger and that’s probably the area where we’ve put most of our focus.”

This tubular steel trellis frame cradles the new Daytona 675 derived 799cc triple motor. Essentially a bigger and torquier version of the popular Street Triple engine, the new motor keeps the same 74mm bore as the Triple while gaining its extra capacity and torque through a longer stroke of 61.9mm. The cylinder head casting is also the same on both bikes, albeit there’s been machining to change the combustion chamber, inlet and outlet ports etc. Almost everything else is new, including the crankcases. The new Tiger 800 lump makes 94bhp at 9300rpm, with the torque curve peaking at 58lb-ft at 7850rpm; an expected lower state of tune than the Street Triple.

Another key feature with the new motor is the addition of a heavy-duty 645W generator, which, with nearly a third more output than the BMW F800GS’s, will easily cope with plenty of extra electrical demands, like Triumph’s aftermarket auxiliary lights, heated clothing etc. The three-into-one exhaust system neatly wraps around the engine with the catalytic converter a matter of millimetres away from the sump – capturing as much radiating heat as possible for better efficiency and a faster warm up – while the highlevel end can tidily followthe line of the seat unit.

The twin-sided cast aluminium swingarm mounts directly to the stressed-member engine, combining with the chassis and 43mm (45mm on the XC) USD Showa forks to produce a wheelbase of 1555mm (1568mm on the XC). The rear shock’s also a Showa unit and benefits from hydraulically adjustable preload. The stock Tiger gets 10-spoke, cast alloy wheels with a 19- inch rimfront and a 17-inch rear, while the XC has dirt-friendly 36/32 spoked wheels and a 21-inch front rim. Nissin two-piston calipers mount on the 308mm floating discs at the front, while a single Nissin floating caliper pairs with the 255mm disc at the rear. 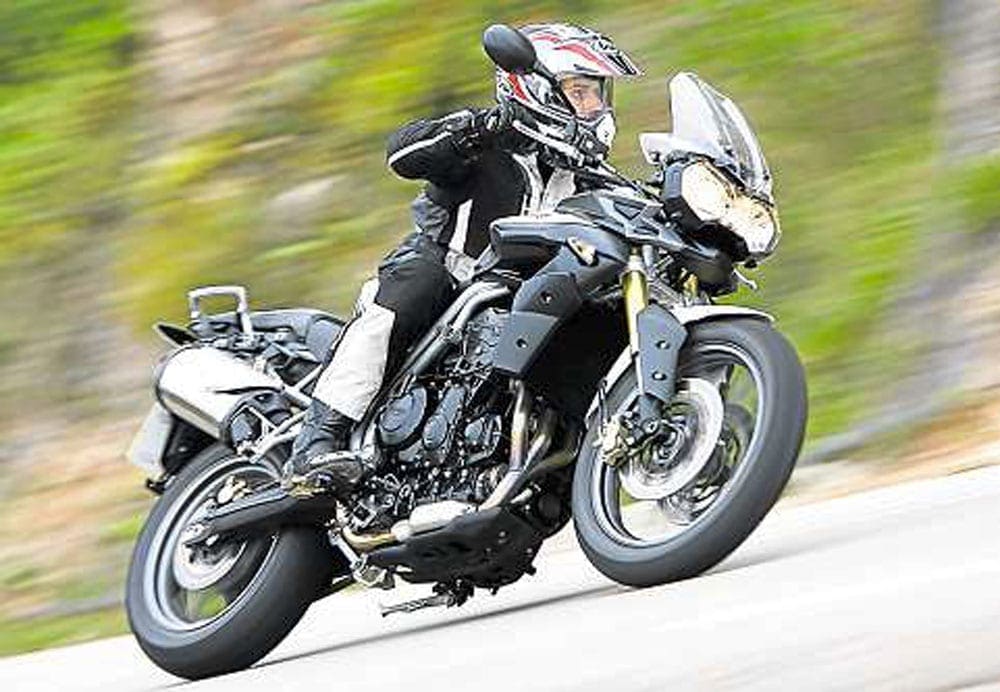 What’s the Tiger 800 like on the roads?
Straddling the Tiger, the 810mm seat height means at 5ft 9in, I can comfortably place both feet on the ground. For the benefit of taller people, the seat can be raised by a further 20mm in about 30 seconds by removing the seat and flicking a bar underneath and, thanks to asymmetric risers, the high-rise handlebars can be pivoted to suit the rider. The clock display’s half analogue/half digital face is easy and clear to read, with a fuel gauge, trip computer, range, gear position and digital clock. The footpegs are forward and low in position, meaning your legs are at a comfortable 90˚ angle. There’s plenty of room for pillions too – the grab handles are in the right place and easy to use.

Flicking up the side stand and hitting the electric start button, the long-stroke triple bursts into life emitting that intoxicating geartrain whirr only Triumphs make. Selecting first gear, the smooth combination of the light clutch and all-new EFI fuelling allows for an effortless start, pulling up the rev-range until I short shift up the box.

It only takes a few metres to appreciate just how good the bike’s chassis is: coming up to a roundabout the 210kg bike turns easily from sideto- side, despite the fact it’s equipped with a 19-inch front wheel. Heading out on to the open roads, the new Tiger’s handling is agile, planted and the compliant Showa suspension works well, the bike holding a consistent line throughout corner entry, apex and exit.

Complementing the bike’s chassis, the new 799cc engine also impresses me. Despite only making 94bhp, the motor delivers its power in the most useable of ways. From as low as 2000rpm, the torquey triple pulls hard up the revs and, at 6000rpm, the nature of the engine changes to something more similar to a revvy sportsbike. There are no peaks or troughs in the fuelling and the forgiving clutch allows you to go swiftly down through the gearbox without any nasty lockups. The standard non-adjustable screen although set forwards and quite low, does keep the wind off well – an optional, higher adjustable screen is available for taller riders.

The bikes we were riding were the non-ABS models, but I felt more than comfortable with the Nissin’s brake setup. Sharp and responsive, even on some of the damp mountain roads I felt confident when squeezing hard on the front brake lever on the approach to another set of twisties. And the progressive rear brake did a great job too: I used it several times to pull me tighter mid-corner without upsetting theOEPirelli Scorpions the Tiger comes fitted with. The Tiger’s spacious, upright riding position feels very natural and the flat seat should be comfortable enough for decent distances.

What’s the verdict?
While I can’t vouch for the Tiger 800’s occasional off-road abilities, I can say how good it is on the Tarmac. Clearly designed as an adventurous milemuncher, the Tiger has a defined onroad feel, is easy to ride, handles well and is undoubtedly strong competition to the BMW’s 800cc, twin-cylinder F650GS, which has, up until now, set the bar for bikes of this nature. In my opinion, the Tiger’s definitely the more comfortable of the two machines and feelsmore capable.However, the Tiger is slightly less economical than theGS, but you should easily get 200 plus miles from the 19-litre Tiger’s tank, which, compared to the BMW’s 16-litre capacity, will be better for touring purposes. 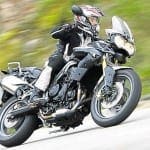 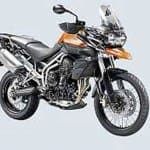 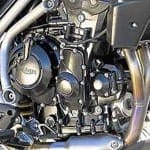 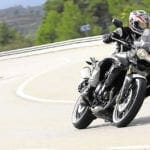 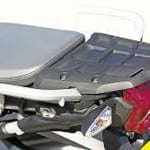 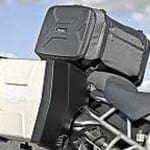 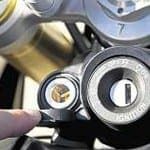 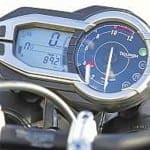 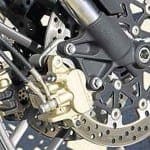 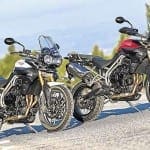