Overview
It kind of all started with 1993’s ‘The Big-1’. Powered by a CBR1000 motor, the name was (thankfully) soon dropped, as the rumour was that ‘Big- 1’ was a registered trademark of an American brand of toilet cleaner… Despite the fact that the renamed ‘Super Four’ failed to shift in big numbers in the UK before deletion in 1997, Honda UK were hopeful of big things fromthe 2003 replacement – the CB1300.

The CB1300 itself had been around in Japan since 1998, using the motor from the V-Max-alike Honda X4, which was popular in Japan. Colours harked back to a golden era, aping schemes worn by bikes like the CBX1000 and CB900F. For 2003, the bike would get an update and finally be imported into the UK.

Feedback was good – in terms of outright performance the CB1300 trounced its rivals. Okay, so some may have had more power, but the instant urge from the big 1284cc lump was not to be ignored, while Honda’s chassis engineers had done a brilliant job with the handling, knocking the competition into a cocked hat and hiding the CB’s 224 kilos with ease.

Two years on and Honda refined the model still further, adding a useful half-fairing and the reassuring option of ABS.

In today’s world the CB1300 is now only imported in its ‘S’ guise with the half fairing. Back in 2003 the bike was a class leader with a price tag a few hundred quid dearer than the competition at £6649 on the road. Today’s model retails at £10,375 and competition such as the ZRX1200R has disappeared, although the XJR soldiers on at a more respectable £8600 or thereabouts. 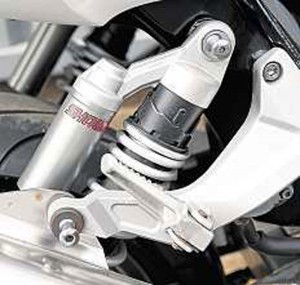 Why do they get overlooked?
Looking at the contemporaries of the time – Kawasaki ZRX1200R, Yamaha XJR1300 and SuzukiGSX1400 –may give us a clue. Kawasaki’s Eddie Lawson rep in R form looked the business and produced the most power, even if the motor was water-cooled and revvy in comparison. The XJR – with its roots in the FJ and subsequent XJ1200 – had cooling fins that had to work and for some, that was the actual point. Meanwhile, Suzuki’s GSX just wobbled.

Among its peers the Honda was – if we’re brutally honest – the best bike there. For those that took the plunge the CB1300 was a big hit – check out the forums if you don’t believe it. However, it was a mix of retro and modern and perhaps as a result (and like the CB1000 ‘Big One’ before it) failed to capture some people’s imagination. Some say it lacked heritage, but with bikes like the CBX1000 and CB900F as progenitors that was cobblers. Also, as the CB13’s project leader Hara-san had been with Honda since 1971, he therefore knew these bikes the first time round plus he was project leader for the CB1000 Super Four/Big One.

What to check
Dare we say the CB1300 is reliable and trustworthy? Well, it is. But that’s not to say some problems haven’t been reported. They do drink the fuel, but owners report that after a re-jet via a Power Commander (either with or without a pipe) fuel economy often improves.

However, the bike did have a recall for an electrical issue that could cause engines to cut out or brake lights to fail.

We’ve heard of a couple of bikes with gearbox issues, but they are rare. Some owners also reported a vibration issue (see: what’s it like to ride) but to our knowledge no real cause was found – perhaps it’s simply down to what the rider has ridden before and the visceral buzz isn’t what they’re used to?

One thing you do need to keep tabs on is finish. Yes, it’s as good as that found on Honda’s range-toppers such as the VFR and Blade, but those exposed parts need to be given a wash down after a salty/rainy ride. Engine parts and fork legs are the most susceptible.

Equipment
You’d think on a naked bruiser, you wouldn’t get a lot but in comparison with its rivals, you did with the CB13. Analogue clocks hid two LCD displays, which held two trips, time, date, ambient air temp, stopwatch and fuel gauge.

From 2005, the CB1300 had selfilluminating dials with trips, total trip meter, countdown trip, distance travelled, engine temp, stopwatch, ambient temp as well as date and time and a date reminder!

For the SA half-faired version, two litre-sized pockets – of which one was lockable – added to the standard model’s impressive underseat storage space of 12.4 litres that could hold plenty of stuff. With the CB1300, there’s also been space under the seat for Ulocks, too. All this makes the bike pretty practical for a big naked. 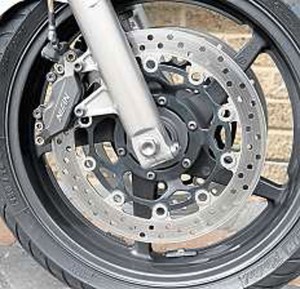 What’s it like to ride?
It’s a four, not a twin, but despite that there’s plenty of grunt to be had from the big CB. With a motor redlining at just 9000rpm, and with a decent claimed 86lb-ft kicking in at just 6000rpm, the CB1300 gives you a big kick up the pants swiftly and surely, and this near-to-22,000-miler was no exception. Handling is just as I remember. This is a very assured machine as despite its weight, Honda did a good job of hiding the mass well. Out of all the big nakeds, the CB1300 was always the best handler. Brakes used to be good too. The brakes on our example lacked a bit of power, but probably nothing that a good strip and clean wouldn’t sort out. Coming as they do from the similar-vintage FireBlade, they should work very well indeed.

Our test bike also had a tendency to vibe a little at speed. Now, way back in the day mine never did this, but I was contacted by a number of owners who complained that theirs did. Reports said that the vibration occurred just as you hit peak torque at 6000rpm. This wasn’t a feeling I had with my 2004 machine, and the tingle on this test bike continued. This example also had a set of Renthals, but I’m pretty sure that wouldn’t have affected things. On big nakeds bars are the first things to bend in the case of a spill, but no other damage could be spied, so perhaps they were changed for comfort? Strange, as you can easily adjust the standard bars to suit your reach. 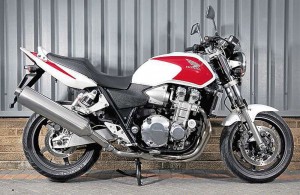 What to pay
You’ll find some CB13s out there with some big mileages on (touring is often the reason) and these bikes will command lower prices – you can pick one up for around £2500 privately if you search, although some can have 50-70,000 miles on the clock.

At least that tells you something about reliability. Faired SAs start at around the £3000-3500 mark. Most CB1300s that haven’t been toured on (you might even get panniers too) will be standard, save for the odd Scottoiler, end can and fly screens.

If you really want to pay over £10,000 for a new CB, think on this: half that money would secure you a 2008 bike with around 10,000 miles or less on the clock, while if you sniff around you’ll find dealers punting out new bikes for around £2000 less than the OTR price, so do look first.

Verdict
Big, beefy and meaty – but at heart, the CB is a pussycat. Lovely looks and a torquey motormake the CB a winner in our book.