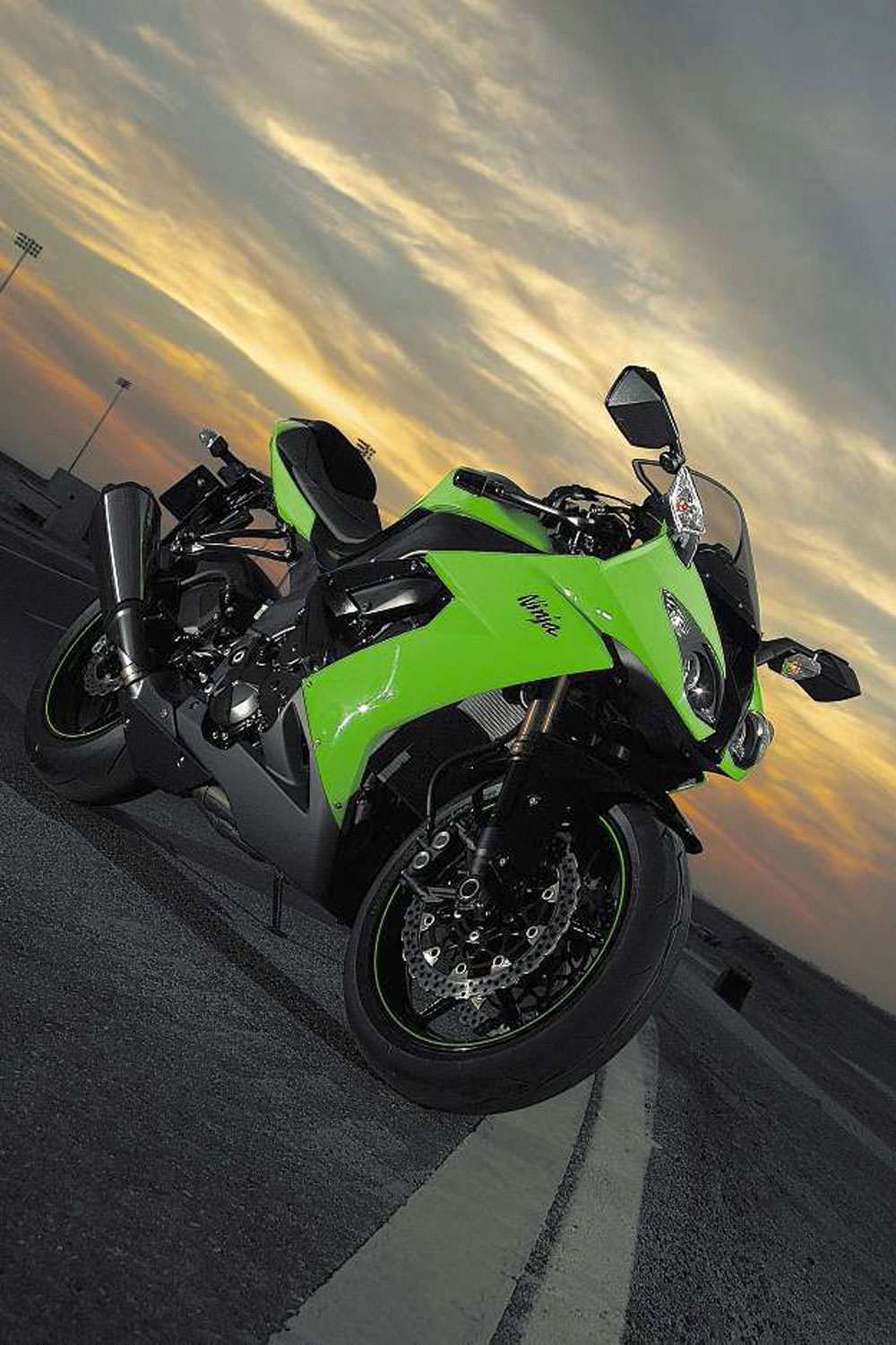 There’s a time and a place for riding nine-grand’s worth of one of the world’s fastest superbikes. Mid February, on damp roads and with the temperature just a tad above freezing, isn’t it. So, with a screw so loose it could he heard rattling in my helmet, that’s exactly what I did. Those friendly chaps at The Rocket Centre in Blackburn were brave enough to collaborate by handing me the keys to their ZX-10R demo and I am pleased to say they got it back in one piece.

Kawasaki redesigned the fearsome Ninja for the 2008 season and made no bones about its development as an out-and-out racer, built specifically to win superbike races. But once the engineers had completed that exercise they set about turning it into a manageable road bike as well and put it through a rigorous testing programme before delivering it to the street.

During the redevelopment, Kawasaki’s twintube backbone frame was re-worked to provide the kind of stiffness only usually found in long-term Viagra users. The frame also channels the gallons of forced air from the redesigned (and quieter) RAM air intake. Suspension upgrades include enough tweaks and adjustments to keep the most c o m m i t t e d tinkerer happy in his shed on a Sunday morning, or at the racetrack and the 43mm inverted front forks have a fancy DLC (Diamond Like Carbon) coating to reduce friction. Overhaul of the brakes includes new Tokico radial mount calipers with dual pads to replace the four-pad arrangement that went before and they’ve treated the Ninja to wavy discs. The result is enough stopping power to detach a retina if you grab a handful, but they still have plenty of feel to them.

The already impressive engine didn’t go untouched either and now features new cam profiles more efficient porting and cylinder heads. The result is an increase of 6hp at 11,500rpm so the bike makes around 185hp at the crank while stood still and just shy of 200 when the ram air kicks in. Suffice to say this missile has more than enough potency for any road rider. Full throttle is only for the brave or foolish at this time of year but a quick blast along a section of deserted motorway confirmed that it will make the hairs on the back of your neck tingle quite easily.

Kawasaki were quick to point out that the K8 ZX- 10R isn’t fitted with traction control but it’s sophisticated electrickery sounds pretty close to me and is said to react to engine speed, revs, throttle position, speed and gear selection as well as feedback from the intake air temp and pressure, engine temperature and O2 sensors. To cut the corporate waffle short, the ECU does some quick mental arithmetic after taking all the above factors into account and if it decides there’s been a sudden spike in engine speed that it thinks could be bad for the riders health it’ll alter the ignition timing to compensate and reduce your chances of testing out the protective quality of your riding kit. Whatever you want to call the system (the firm prefer Kawasaki Ignition Management System) it can only be a good thing, providing you trust the reliability of a compu… sorry the power went on my laptop.
Fortunately, I rode the ZX-10R a few days before heavy snowfall would have made it impossible, but icy roads still required caution. That meant I wasn’t able to generate massive lean angles, do any harsh brake or suspension testing or ride like a loon. What I can tell you is that the ZX-10R has managed to shed its previous reputation as a fearsome beast, ready to spit off the unwary rider if he or she doesn’t treat the mean, green monster with at least a degree of respect. As such it never felt out of shape, quick downshifts were dealt with without fuss thanks to the slipper clutch and apart from the rear suspension being slightly harsh on the stock settings for my, liking, the Ninja felt controllable at all times.

The fun begins at around 5000rpm and carries on through to 11,500rpm. By the way, the clocks are exquisite and the LCD speedo appears to float in thin air in the centre of the crystal clear tacho. During engine development the bike was given extra power at the top end, without losing bottom end grunt and it seems to have worked.

Riding the bike in almost freezing conditions was no worse than commuting on a CG125. The bike is easy to manage and will still excite you if you or the weather conditions see fit. Kawasaki have tamed their monster – that’s tame as in caged tiger not pussycat – but they’ve not diluted its performance appeal in the process.

Its looks have been sharpened, the bike feels more compact thanks to a change in geometry and some re-styling (despite weighing more than the previous model!) and should present no problems to the average rider. But if you want it to roar it still has that raw aggressive streak lurking within its impressive rev range. Just poke it sharply with a stick and hold tight.

Finance: Kawasaki are offering a 36 month, £99 deposit, 0 per cent finance deal on their range

Thanks to Rocket Centre, Blackburn for the loan of their demo bike, www.rocketcentre.