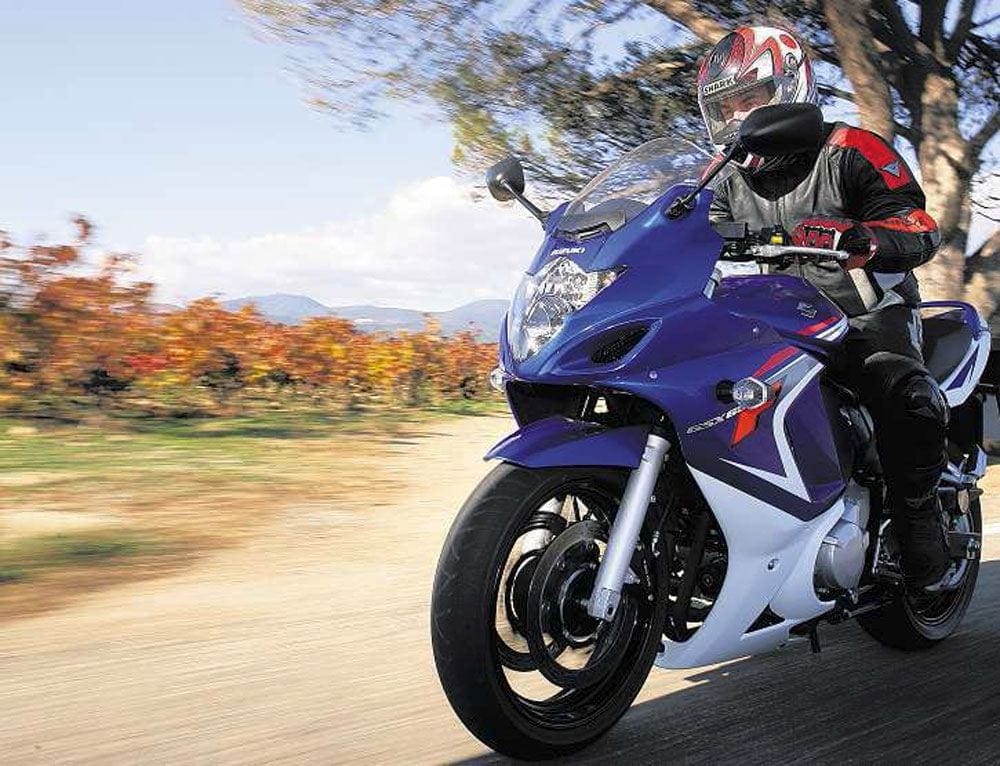 MCM freelance Bob Pickett took a Suzuki GSX650F for a 100-mile test ride and ended up buying it. He has now put 1000 winter miles on the clock and files the first of a series of reports we will be producing on life with the middleweight all-rounder.

There can be no greater compliment than to buy a bike you test, but why did I choose to hand over my cash for a Suzuki GSX650F after a day on a demonstrator, and has it continued to impress?

First, it was a case of pure practicality. You could say the Suzuki was just what the doctor ordered. A long term back injury suffered when a car driver knocked me off still causes me trouble and on top of that I have now gone and developed tennis elbow in both arms.

I face a long commute into London every day and I needed a bike with a riding position that took the weight off these areas. 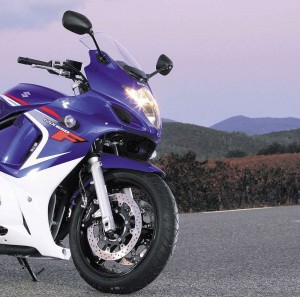 The GSX650F leans the rider more forward than you would expect from a quick look, but the angle is less radical than a full-blown sports bike (in fact, it is more upright than an SV650S), so while the weight is pushed forwards, the weight is distributed between wrists and elbows – just the compromise I needed.

Secondly, my bikes rack up a large number of miles on the commuter run. To handle this, you need a bike that is able to lay down power in a controlled way for the town work, but lets you up the ante when things open up. It also needs suspension that can soak up the poorly maintained ordure that are inner-city road surfaces, but when you are able to crack on provides you with confidence that it will grip the road and handle what you throw at it.

Last of all, town and inner-city trundling will see you working the gears, so you need a clutch that isn’t going to require too much physical effort, combined with a smooth gearbox.

I am more than happy to report that the GSX gives me all of this – in spades.

Suzuki have re-mapped the engine (from its Bandit donor) to provide more midrange and top end. But it also lets you dial in totally controllable power at low revs. It will plod along under 10mph, thanks to Suzuki’s dual throttle valve fuel-injection system, but between 5-6K the engine comes to life and gets the GSX going. And when you really crack open the throttle, the power builds in a totally linear fashion, just growing and growing all the way to the 12,500rpm redline. For most overtakes, I find no need to change down – just open the throttle and go.

The engine is well matched by the suspension. The GSX650F is a big old bird (216kg claimed dry weight), but that weight feels like it is sitting low down, translating into plush and balanced ride. The handling matches the rest of the bike, not sharp by sportbike standards perhaps, and with that weight it requires definite input from the rider to change direction, but once turned it beds in and holds the line in a poised and composed manner. And that weight is a godsend when the wind picks up. There is an overpass I use that has low walls, so a strong gust of wind would see my previous ER-6f pushed sideways. Not the GSX650F. It just carries on in the same composed, settled way, it handles everything else you throw at it.

‘A’ roads are a delight on the GSX650F – just settle in, relax the shoulders, and let the engine haul you along at whatever pace and revs you fancy, in whatever gear you choose. The stability, wide range of available power, along with the relaxed riding position and one of the most comfortable saddles I’ve enjoyed in many a day, means you can have fun on well-surfaced roads, but also undertake long distance work in comfort.

This is the fastest armchair I’ve ever owned.

The gearbox is silky smooth (a Suzuki trait) and although I would like the clutch action to be a little lighter it’s not an issue. I would also praise the mirrors – tall and wide enough to be of real use – the layout of the clocks and the presence of a gear indicator. I like the bike’s looks too. I reckon it could pass for the offspring of a GSX-R and a Hayabusa– broader in the beam than a GSX-R, but smaller and leaner than the Hayabusa. 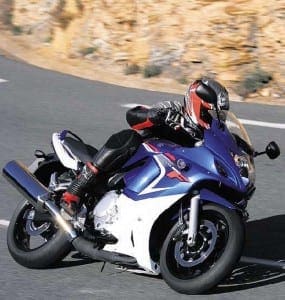 So far so good but no bike is perfect and I do have a few minor niggles. For starters the stoppers – they could be better.. Don’t get me wrong, a good squeeze on the lever will see the GSX650F hauled up, but the lack of initial bite can be a concern in town and with all the weight they have to cope with, a touch more power would be useful. Then again, this bike is being aimed at a combination of more experienced riders and novices looking at their first sportbike, so ultra-sharp stoppers would be a risk for the latter. I just miss the amazing R1- derived brakes on the original Fazer – once you’ve experienced those, precious little compares. And I have to mention the paranoid reserve indicator. The first time it came on, I went and refilled… and put in just 14 litres. The GSX650F has a 19-litre tank. Even in poor moving commuter traffic, I reckon that would leave you maybe 50 miles before the fuel ran out! Perhaps a useful warning for budding Nick Sanders, but not so useful for riding inside the M25. I have to say I’m disappointed with the bungee points too. What was wrong with having four bungee points under the saddle, a la Bandit? Instead, you have two points just behind the saddle, with the other points being down by the pillion pegs. This works well with cargo nets, but just doesn’t do the business effectively with bungee. The GSX650F is going to be treated as a sports-tourer – and to handle that role, it needs to be able to haul luggage.

But the good very much makes up for the bad. Not only does this bike make for an excellent sports-tourer, it also works well as a commuter machine and that gem of an engine is the real treat – just ride the wide range of power, let the plush suspension soak up the bumps and enjoy the ride. This is a lot of bike for just £5200 but I saved myself a few hundred quid on the 2009 list price by buying the demonstrator I borrowed from John’s of Romford (01708 754775). It was too good a deal to miss. There were only 580 miles on the clock and about 100 of them were down to me anyway. I will let you know how we get on over the coming months.