The Hypermotard has never been the most practical of bikes, with its exposed riding position, tiny tank, tall seat, and unashamed focus on style and fun. But with the entrylevel Hypermotard 796 having recently arrived to give a more down to earth option, Ducati couldn’t resist moving the Hyper family in the other direction, with the lighter and more powerful 1100 EVO. 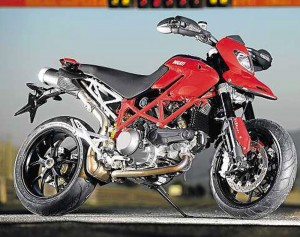 Correction: make that EVOs in the plural because, like the original Hypermotard, this update comes in two versions. Alongside the standard 1100 is a tweaked EVO SP that holds the same motor in a taller, lighter, racier and more expensive chassis.

What was the inspiration?
According to David James, Ducati’s Product Manager, the EVOs are logical evolutions of the original Hypermotard.

“We listened to what owners said; how they use their bikes,” he says. “We looked at the solutions those riders were coming up with and asked them what they’d like to see. We’ve taken everything from last year’s model to create the EVO, which is a sports-street bike. And we’ve listened to riders who wanted to go on track to create the SP.”

So the engine’s new, then?
Yes, although it’s still Ducati’s faithful air/oil-cooled, SOHC, two-valvesper- cylinder V-twin, with capacity unchanged at 1078cc. New cylinder heads, cams and pistons increase max output by five horsepower to 95bhp at 7500rpm – impressive for such a simple lump. It now uses a single spark plug per cylinder rather than the old dual spark head.

Reduced weight is the EVO models’ other key feature, and the engine contributes most of that too. Changes including Vacural (vacuum cast) crankcases and a lighter flywheel provide more than 5kg of the overall 7kg saving. The rest is shed by using the steel trellis frame from the Hypermotard 796, with its lighter rear subframe. 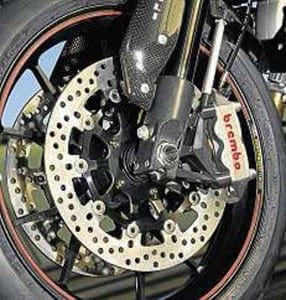 The SP is upgraded with Monobloc calipers and Öhlins shock, plus longer forks giving the extra 30mm of ground clearance that hard-riding owners asked for.

The other concession to Hyper racers is the higher handlebar designed to take some strain under braking, keep more weight over the rear wheel, and aid control when skidding into turns. 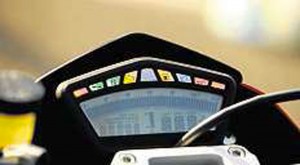 Does the EVOmeasure up?
This latest version of the desmo twovalve is a very flexible lump with heaps of character. And if it’s not stunningly powerful at the top end, that didn’t matter on the launch at the Mores track in Sardinia, where it was great fun to short-shift through the slick six-speed box.

The standard EVO was superb on the twisty little circuit, punching out of corners withawonderfully flexible feel that made it very easy to ride. The red bikes (black is an option) were seriously quick, though footrests scraped before the Pirelli DiabloRosso tyres ranout of grip. Its blend of Sachs shock and Marzocchi forks gave excellent control and handling.

What about the SP?
If the standard EVO was good on the track, the SP was better still – as you’d expect ofapurpose-builtweapon.The white-and-red bike bellowed out of corners even more strongly, boosted by a sweet-sounding Termignoni accessory race pipe that added a further 5bhpand saved an extra 7kg of weight. Its longer forks gave more ground clearance, at the expense of a seat so tall that anyone under six feet will struggle at a standstill.

At only 171kg dry (one kilo lighter than the standard EVO), the SP is seriously light in standard form.With the Termi pipe bringing that down to 164kg, the Ducati was brilliantly responsive to a nudge on its wide bars, after the hard braking with the powerful Monobloc calipers and ultra-grippy front Pirelli Supercorsa SP had tried to bury its pointy nose in the track.

Which is better for the road? After a track-only launch it’s hard to be sure, but the standard model looks the better bet, as well as being cheaper at £8995. Forks with as much travel as the SP’s can make a bike slow steering unless it’s being braked hard enough to make the front end dive. That’s fine on the track – where the SP rules, especially with the Termi cans that add £1500 to its £10,750 price – but annoying on the road.

However, the standard Hypermotard is as bonkers as most people are likely to want. It has minimal wind protection, a tall seat and a tiny 12.4 litre tank, so look elsewhere if you need a remotely practical bike.

But if you fancy a quick, light, torquey V-twin with bags of style and character, the EVO ticks every box.