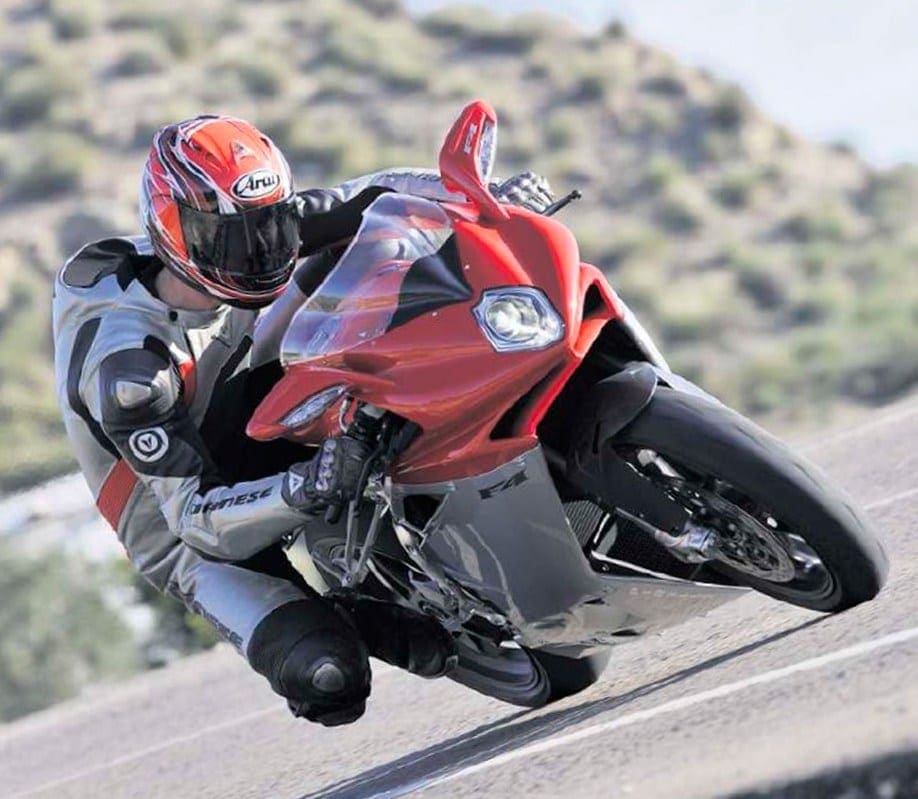 MV’s F4 has always been stylish and fast, but it hasn’t always had the refinement to match. So, while the most obvious result of the new F4’s comprehensive revamp is a sharper, more angular look, the other, more important changes have a very definite aim. Like MV’s recently updated naked Brutales, the latest F4 has been revised to make it more sophisticated and also rider-friendly. 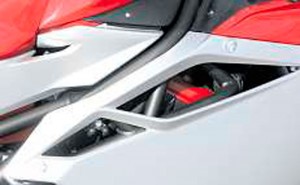 The 998cc, four-cylinder motor – whose red cylinder head is visible through new slots in the fairing – is still mightily powerful, with a claimed maximum of 186bhp at 12,900rpm. But as well as containing numerous lighter and more compact parts, the engine has a new, heavier

crankshaft to give more controlled acceleration. The radial 16-valve unit has also been rebalanced to run more smoothly without the need for a balancer shaft.

It’s a similar story with the chassis, which retains MV’s familiar frame combination of steel tubes and aluminium sideplate sections. Softer suspension, revised ergonomics, a longer swingarm and extensive weight-saving results in a shorter, narrower, lightweight chassis that has helped achieve a 52% front, 48% rear weight distribution overall. All this adds up to a bike that is intended to be a reasonably comfortable and practical roadster, as well as a demon on the racetrack. 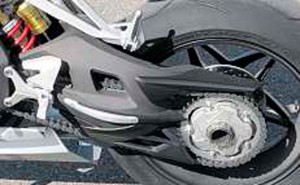 Has it still got the MV magic?

This restyled F4 is still gorgeous, and riding it is a magical experience from the moment you climb aboard and examine the new instrument panel, polished top yoke and broad Marzocchi fork-tops. The motor fires up with a menacing exhaust growl, and the F4 immediately feels just as racy as its predecessor – though distinctly more refined. Its throttle response is crisp but less abrupt than before, presumably due to the retuned Marelli fuel injection system (with new 49mm Mikuni throttle bodies) and especially to the 2kg heavier crankshaft.

This F4 gains variable length inlet trumpets, as previously fitted only to MV’s limited-edition models, which boost midrange response while allowing optimum high-rev performance. The motor still feels flat at 5000rpm but by 7000rpm it’s revving hard with a tuneful induction howl. And up near the 13,500rpm limit the F4 is distinctly smoother than the rather buzzy previous model. 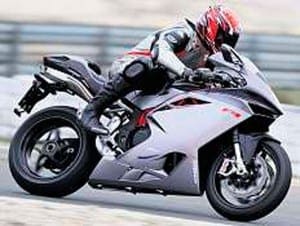 Keeping tabs on the electronics is a new Marelli 7BMECU, which as well as controlling the eight fuel injectors, intake trumpets, exhaust control valve and gear selection switch, also takes care of the dual switchable Sport and Rain maps.

The F4 also gains a traction control system like that of the Brutales. It’s a relatively simple eight-stage system that cuts sparks when it detects a spike in crankshaft speed, and should give useful security, although on track at Almeria few riders were aware of it cutting in.

What about the chassis? 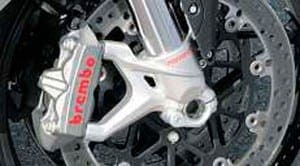 Handling was superb, both at the Almeria circuit and on the surrounding roads of southern Spain during the launch. The suspension worked very well on back-road bumps, giving a more compliant ride than the old F4 would have done. On the track the blend of Marzocchi forks and Sachs shock kept excellent control while the bike carved through the circuit’s twisty section. This F4’s lighter fairing, headlight, wheels and swingarm save a total of 10kg. At 192kg the MV’s still slightly heavier than some rivals, but it’s very agile.

Comfort levels seem to depend on rider size. Small riders benefited from the revised ergonomics, which bring the reasonably tall seat forward to give less of a stretch to the bars. But taller pilots – myself included – suffered with the high footrests, which, unlike the old F4’s, are not adjustable. After spending £14,250 on an F4, I wouldn’t be too happy about having to spend more on MV’s accessory-only adjustable pegs.

What do I get for my money? 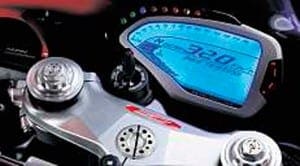 So what’s the verdict?

The F4 is still incredibly rapid, don’t worry about that. On Almeria’s back straight it didn’t reach its likely 190mph top speed but the MV was still surging forward at about 170mph when I had to grab the powerful Brembo monobloc front brake for the following slow turn.

It was ironic that as I left Almeria, a Belgian journalist friend gave me a copy of his new book of circuit riding instruction, entitled: ‘The Clock Doesn’t Lie’. That phrase might normally be true on a racetrack but it’s not the case with the F4. This new MV Agusta is probably no faster than its predecessor, but it is a more sophisticated, rider-friendly and enjoyable superbike. 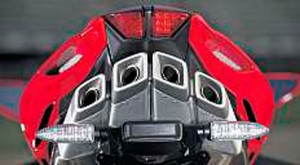