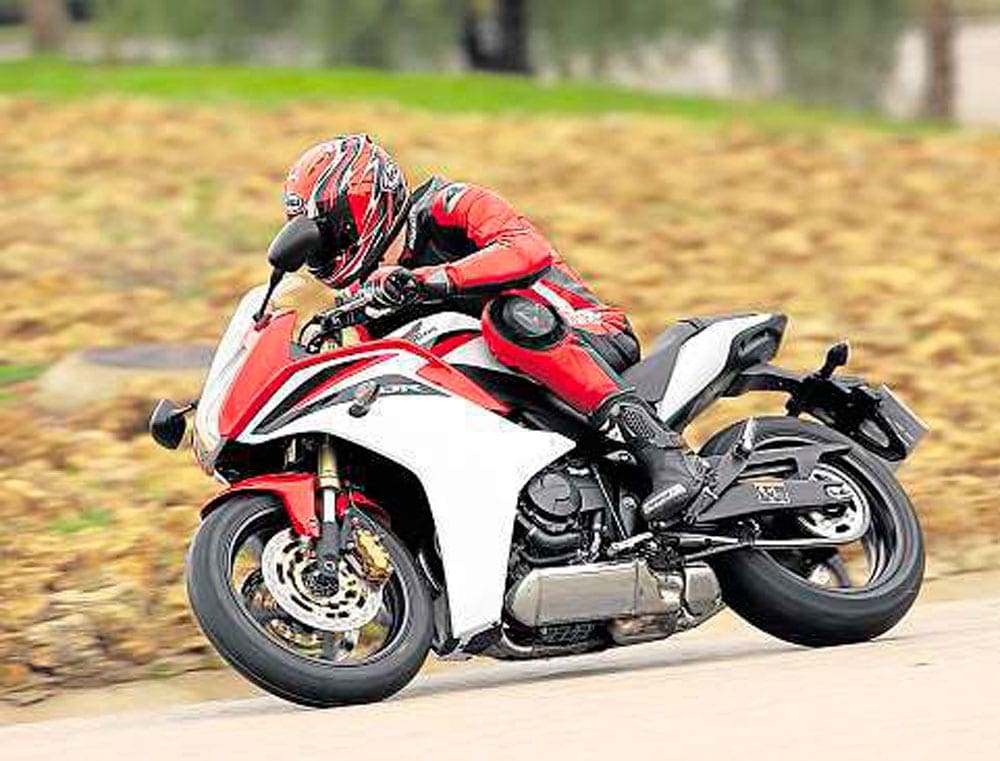 The CBR600F is back. But is the new bike still as versatile and good value as the original affordable all-rounder? 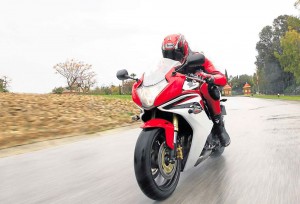 Talk about good timing. A few days before I arrived in Seville for the launch of the new CBR600F, the Spanish government reduced their national speed limit in order to save fuel and expense. It seemed like the ideal moment for Honda to be launching a middleweight intended to be a less expensive, more economical alternative to the CBR600RR.

In fact, the CBR600F’s arrival is well timed for wider reasons than one country’s change of law. It’s now eight years since Honda introduced the RR, replacing the original CBR600F that had been a global bestseller throughout the 1990s. Now, with middleweight super sports bikes having got ever more racy, specialised and expensive in recent years, Honda have decided there’s a gap for a cheaper and more versatile four along more traditional lines.

Hence the introduction of the new generation CBR600F, which is intended to look sporty while being practical and inexpensive enough for everyday use. Honda hope it will appeal to young riders moving up from small capacity sports bikes, to riders of naked bikes who fancy something a bit more lively, and to ageing super sports pilots looking for more comfort and value for money. 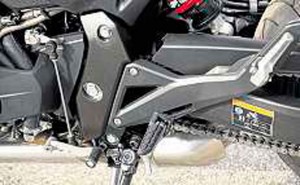 Sporty looks were regarded as vital: a key F-bike feature is its full fairing, which was shaped in Honda’s Italian studio by Valerio Aiello. To my eyes he’s done a good job, although the blue-and-white version (black and red/white are options) is reminiscent of a Suzuki GSX-R from some angles. The sharp lines, low screen and kicked-up tailpiece give an appearance that’s almost misleadingly aggressive, given the CBR’s all-rounder status.

Competitive price was also deemed crucial, which meant keeping development costs to a minimum. Fortunately for Honda they had a suitable donor bike in the CB600F Hornet. The naked four, introduced four years ago, provides the 599cc, liquid-cooled engine. The DOHC 16-valve unit is in an identical state of tune and comes with the same injection and four-into-one exhaust, so provides an unchanged max of 100bhp at 12,000rpm. 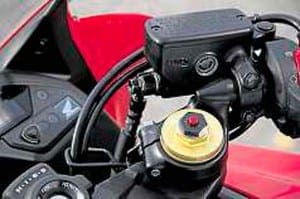 The Hornet also provides the new CBR’s chassis, starting with the aluminium so-called ‘mono-backbone’ frame, which has a large, square-section main section and uses the engine as a stressed member. The aluminium swingarm and rear monoshock are also taken straight from the Hornet, as are other components, including the 17-inch wheels.

Of the major chassis bits only the 41mm, USD front forks are different, and even they are simply 50mm longer to allow a pair of raised clip-on handlebars to be bolted onto their ends. Riding position combines an unchanged, 800mm seat height with bars set midway between CBR600RR and Hornet levels: about 70mm lower than the naked bike’s and higher than the RR’s. Footrest position, I was surprised to discover, is identical on all three models. 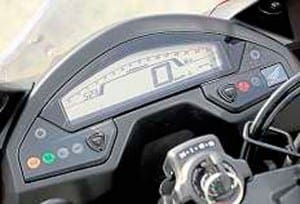 How does the CBR perform?

Given so many shared parts, not to mention itsCBR600F heritage, it was no surprise that the Honda felt familiar as our group headed south-east from the launch base hotel in southern Spain. For a middleweight the Honda felt reasonably roomy as I leant forward slightly to the bars. Yet with a reasonably low, slim seat and a kerb weight of 211kg it felt low, compact and light enough to be manageable for most riders. Straight-line performance was almost identical to the Hornet’s, with the crucial difference that high-speed riding was distinctly easier and more comfortable, especially on a spitefully cold and often damp day in Andalucia.

The Honda purred quietly and efficiently forward from low revs, its injection system dishing out just enough fuel mix for glitch-free acceleration, though without much grunt in the midrange. 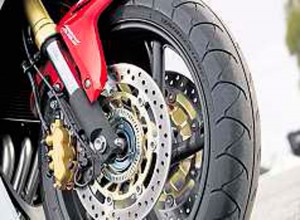 This bike is very much a middleweight, with all that traditionally means in terms of liking to be revved, and not delivering much unless it is. Tweaking the throttle at low revs, or even at typical 75mph and about 6000rpm in top gear, was like having a large elastic band in the transmission. The Honda responded smoothly but lethargically, meaning that brisk main road overtaking often required at least a couple of clicks down through the slickshifting six-speedbox.

Things livened up nicely when the slightly hard-to-read tacho bar hit about 7000rpm. Suddenly the CBR-F leapt forward with much increased force, its engine now spinning urgently towards the 13,000rpm redline through the gears. With my head behind the small but usefully protective screen on the A376 heading towards Utrera, the Honda put 135mph on its usefully large and legible digital speedo and was still pulling when I ran out of room. 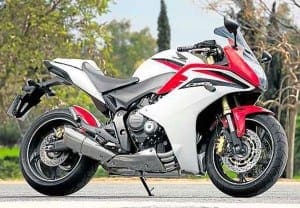 Even so, I ended up at the coffee stop near Algodonales with respect for the CBR600F rather than a huge amount of enthusiasm. It had seemed pretty comfortable, though I didn’t have a pillion to comment on what the handholds were like. And its 18.4 litre tank should give a respectable range of between 120 and 150 miles, although the digital instrument panel’s readout was saying the engine was using fuel at a not especially economical rate of under 40mpg, albeit with fairly hard use.

The next stretch of road proved just how enjoyable the CBR can be. For about 10miles the road followed a lake in a superbly winding, smoothly surfaced ribbon of Tarmac, giving the Honda a perfect opportunity to show off its rev-happy engine and what turned out to be a wonderfully well balanced chassis. Despite having reasonably soft suspension, the bike stayed impressively stable as it was pitched into sweeping curves at high speed, occasionally shaking its bars momentarily but always recovering quickly and without drama. 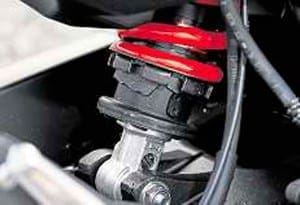 It was superbly agile too, flicking into the tighter turns with a light touch of the bars, and effortlessly tightening its line when a bend turned out to be sharper than expected. Ground clearance wasn’t an issue, with only the toes of my boots occasionally touching down, even when the impressively grippy Bridgestone BT-012s were approaching their limits of adhesion. Brakes were outstanding too. The twin 296mm front discs and three-pot calipers delivered huge stopping power. And the standard ABS system added reassurance – especially useful for the relatively inexperienced riders likely to make up a fair proportion of owners – that a heavy-handed squeeze wouldn’t result in disaster. (Honda’s combined system also adds some front brake when the rear pedal is used.) By the time we’d reached the end of this superb road, turned round and ridden back again at a similarly hectic pace, my respect for the Honda had turned to admiration.

Sadly, most roads aren’t in that one’s league for entertainment value (even if they were, in Britain they’d be lined with speed cameras), and for everyday riding the smooth, slightly bland Honda four will be less involving than bikes with more character. But the CBR is certainly fast, fine-handling and well braked enough to be great fun when given the opportunity. 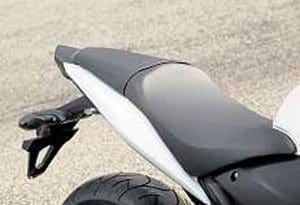 Should you buy one?

This bike could handle a track day with no trouble, given just a few tweaks of its rebound-damping adjustable suspension. On the other hand, you could commute on this CBR, and even tour on it perfectly happily. Why not? That’s what owners of the original CBR600F did all through the 1990s. Honda’s accessory list includes hot grips, an alarm and a tail pack. Shame there’s no hard luggage, or alternative seat with more pillion comfort. But a set of throw over panniers should make the CBR capable of serious distances, even two-up.

Honda set out to build a worthy successor to the hugely versatile, popular and successful original CBR600F. On the evidence so far, that’s exactly what they’ve done, and at a competitive price of £7055 on the road. In fact, the CBR seems so capable and such good value that it makes me wonder why Honda hasn’t had a model like this in its range all along. Whatever the reason, the timing of the CBR600F’s return is excellent and the verdict is clear: welcome back. 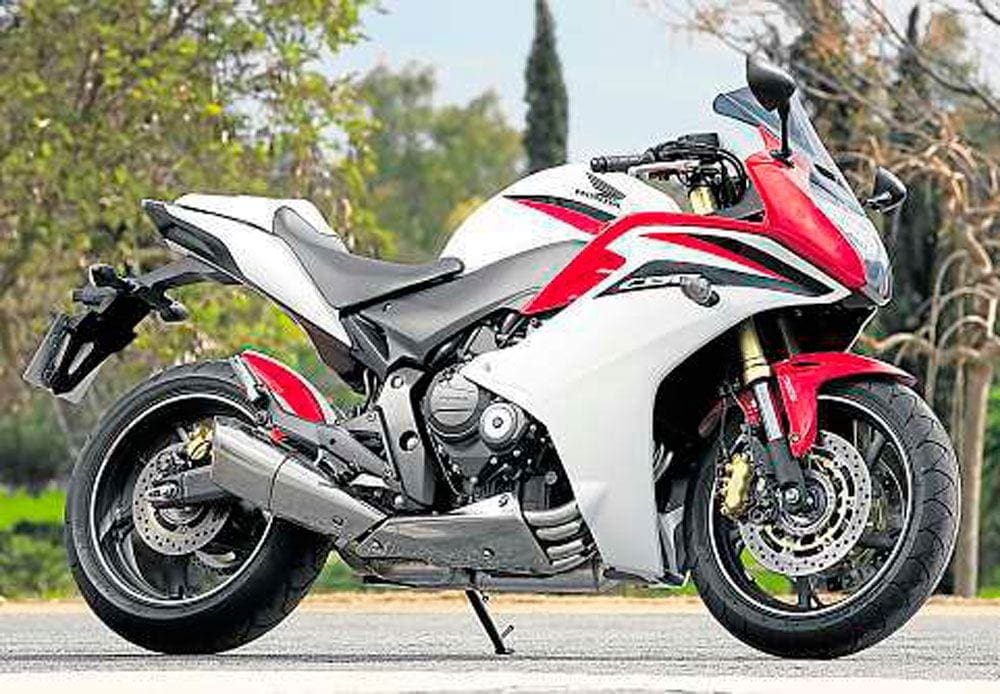